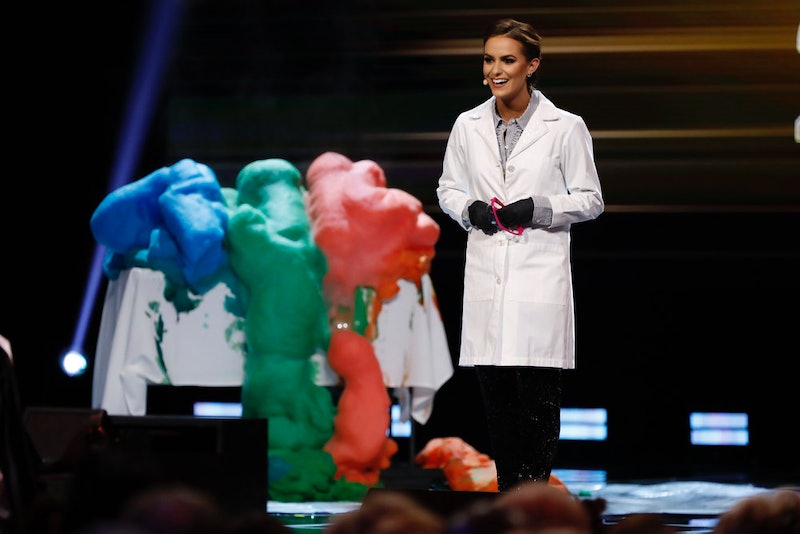 There she is... The newly crowned Miss America 2020 winner is Miss Virginia Camille Schrier, as announced on NBC's Thursday, Dec. 19 live telecast of the competition. The 24-year-old Virginia Commonwealth University Doctor of Pharmacy student bested first runner-up, Miss Georgia Victoria Hill, second runner-up, Miss Missouri Simone Esters, as well as 48 other candidates, to take home the "job." Schrier explained she hopes to "break stereotypes about what it means to be a Miss America in 2020" by being a "woman of science."

In addition to the title itself, the Miss America Organization awarded Schrier with the $50,000 first place scholarship during the ceremony at Connecticut's Mohegan Sun Arena. For their placements, Esters and Hill also took home a portion of the more than $300,000 in total scholarships awarded.

The Miss America Organization announced in 2018 that as part of "Miss America 2.0" it would scrap the controversial swimsuit competition in favor of adding a "job interview" challenge to the competition. Candidates were also awarded time to pitch their social impact initiatives. For Schrier, her reign as Miss America will be spent advocating for her program called Mind Your Meds: Drug Safety and Abuse Prevention from Pediatrics to Geriatrics.

"As a Doctor of Pharmacy student, I am raising social mindfulness about everyday drug safety, abuse prevention, and the opioid epidemic," Schrier, who majored in Biochemistry and Systems Biology at Virginia Tech, explained during her onstage presentation.

Presiding over the evening's festivities as judges were Kelly Rowland, Queer Eye's Karamo Brown, and Superstore actor Lauren Ash. Up on stage, Access Hollywood's Mario Lopez and Kit Hoover provided commentary as the event's co-hosts. For the talent portion of the competition, Schrier exhibited her STEM (science, technology, engineering and math) skills, walking the judges and audience through a science experiment involving colorful explosions caused by the catalytic decomposition of hydrogen peroxide.

"Miss America is someone who needs to educate," said Schrier, who also thanked the pageant for "taking the focus off" of contestants' bodies.

Ultimately, Miss America 2019 Nia Franklin handed over her crown to the Virginia biochemist, as confetti rained down — and Taylor Swift's "ME!" played in the background. Now, Schrier can utilize her new platform both to promote STEM careers, as well as drug abuse prevention.