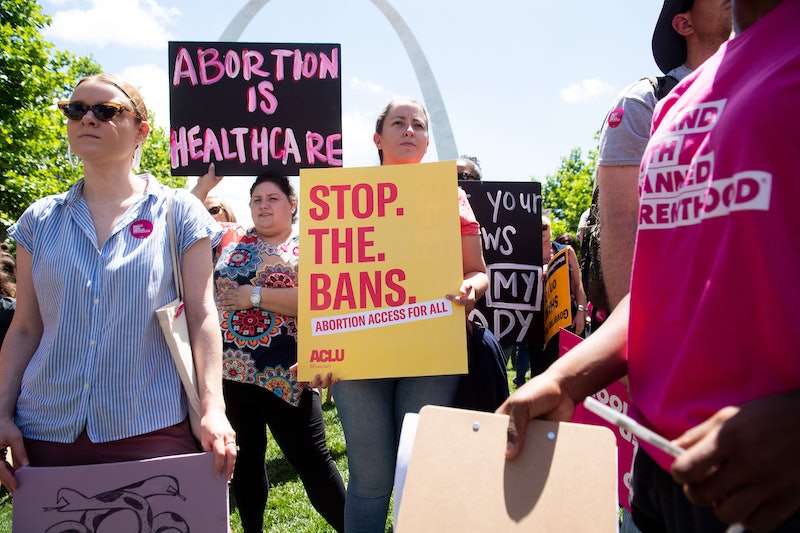 Over the last year, anti-choice advocates have attacked abortion rights from all sides. At least half a dozen states have implemented incredibly restrictive abortion laws, some of which ban abortions without exceptions for rape or incest. At the same time, the federal government has cut off funding to family planning clinics that perform or even talk to patients about abortion. But even though public support for access to abortion is at an all-time high, that hasn't translated to sustained, mass mobilization for abortion rights.

More than 50 pro-choice organizations joined together and held over 500 rallies across the country as part of a national day of action to "Stop the Bans" about a week after Alabama's Republican governor, Kay Ivey, signed a near-total ban on abortions into law in May. But there wasn't much fanfare in mid-August as the Tennessee legislature heard testimony on a bill that would ban abortion as early as six weeks of pregnancy, which is before many women even find out they're pregnant. You also may have missed that on Sept. 10, lawmakers heard testimony for and against a proposed six-week abortion ban in South Carolina.

Neither the Tennessee nor the South Carolina bill are as extreme as the Alabama ban, and neither is guaranteed to pass or be signed into law. But they're part of what Amy Hagstrom Miller, president and CEO of Whole Woman's Health, a network of reproductive health care clinics, describes as the anti-choice movement's larger effort to force a legal battle that could result in the Supreme Court's conservative majority overturning Roe v. Wade.

"What they're doing with these abortion bans is they're just kind of going from state to state trying to see, how far can we go, what's going to withstand litigation, and how can we get one of these cases up to the Supreme Court as fast as possible?" Hagstrom Miller tells Bustle.

The onslaught of state-level abortion restrictions has dovetailed with the Trump administration's own attempts to roll back access to reproductive health care. The administration recently released what advocates call a "gag rule" for the Title X program, which is the only federal program that helps low-income people access breast exams and family planning services like birth control. The Hyde Amendment already prevents federal dollars from funding abortion care, but the new rule bars any organization that receives Title X funds from performing abortions, referring patients for abortions, or even talking about abortion in family planning information. Notably, the official currently overseeing the Title X program, Diane Foley, who is the deputy assistant secretary for population affairs at the Department of Health and Human Services (HHS), previously ran a Christian organization that oversaw two crisis pregnancy centers.

Planned Parenthood withdrew from the Title X program completely on Aug. 19 so that it could continue offering abortion services and information about abortion, giving up an estimated $60 million in federal funding, according to Business Insider. An increasing number of states have also banned private insurance coverage for abortion, among other restrictions on access to the procedure.

Yet there haven't been coordinated rallies or protests as these latest developments played out at both the federal and state level, which Hagstrom Miller says could simply be due to fatigue. Abortion rights supporters are constantly bombarded with other news in addition to these attempts to dismantle reproductive health care. Last month alone, there were mass shootings in El Paso, Texas, and Dayton, Ohio; then Tennessee opened a two-day debate on its abortion ban; then the Trump administration released a new immigration rule that would allow it to detain immigrant families indefinitely; and the month ended with news of yet another mass shooting in West Texas.

"It's coming at us from all sides," Hagstrom Miller says. "People's lives are intersectional. The economic justice, the gun violence justice, the immigrant rights, the racism, the abortion rights — it's all intertwined. We don't live our lives in segments, and so it's the same communities that are affected in a lot of ways."

Heidi Sieck, co-founder and CEO of #VOTEPROCHOICE, an organization that helps people elect pro-choice candidates, tells Bustle that fatigue is a "foundational symptom" for advocates who work in reproductive rights professionally. She says their time and resources are often spread thin compared to anti-choice advocates, who direct their energies at the singular goal of completely outlawing abortion. She points out that the anti-choice movement does this both through "filling the pipeline," or supporting anti-choice politicians and judges over time, and energizing its activists with propaganda to turn out in support of overturning Roe v. Wade.

"The overly funded anti-choice minority has infrastructure in place at all times to be able to not only mobilize people, but also keep this constant flow of information, the anti-choice propaganda," she says.

The Title X gag rule also affects pro-choice groups' abilities to organize supporters against new restrictive abortion legislation and other anti-choice efforts. Sieck points out that Title X grantees like Planned Parenthood, which are giving up funding so as not to compromise the services they provide, will have to spend time figuring out how to make up that funding gap, leaving them with less time and resources to plan protests or engage supporters nationally.

"We don't live our lives in segments, and so it's the same communities that are affected in a lot of ways."

The summer slump in national demonstrations certainly isn't indicative of waning support for abortion and reproductive health care access. In fact, recent Pew Research Center polling has found that about six in 10 people say abortion should be legal in all or most cases. When broken down by party, that number jumps to 81% for Democrats, and drops to 55%, for Republicans, according to a Reuters/Ipsos poll released in May.

Sieck says that the Stop the Bans rallies earlier this year showed that people will turn out to protest, given the opportunity. And advocates in states where abortion restrictions are up for consideration say they're seeing increased interest in local organizing. Lizzy Thomas, a community organizer for Planned Parenthood of Tennessee and North Mississippi, tells Bustle the Stop the Bans rallies were a catapulting action that created a "summer of mobilization" in Tennessee. She says more than 200 pro-choice supporters came to the state legislature to observe the public debate on the proposed six-week ban.

"I think young people are realizing the dire state of reproductive rights in this country, and wanting to get involved and wanting to fight back," Thomas says. In Tennessee, "we've really seen an influx of energy and excitement and of action throughout this year leading up to the hearings."

The national Planned Parenthood also has a Day of Action planned that will take place in cities across the country Saturday. "People are organizing, people are mobilizing," Kelley Robinson, the executive director of Planned Parenthood Action Fund, tells Bustle in an email, noting that its supporters "won’t stand for abortion bans."

Activists who may feel stretched thin right now because they're demonstrating for multiple causes are just being more intentional and practical with their actions right now, Sieck of #VOTEPROCHOICE says. By "intentional," she means people don't want to attend a protest that won't change anything, because "in the end, you're still losing your rights." By comparison, pro-choice supporters showing up at the Tennessee legislature during hearings on the proposed six-week ban is an example of responding to a call-to-action in an intentional and meaningful way, according to Sieck, because they could actually impact whether the ban will pass.

"Yeah, we're really tired, but I think people are being very practical in how they're acting and they will act when necessary," she says.

This post has been updated to clarify the number of Stop the Ban protests.