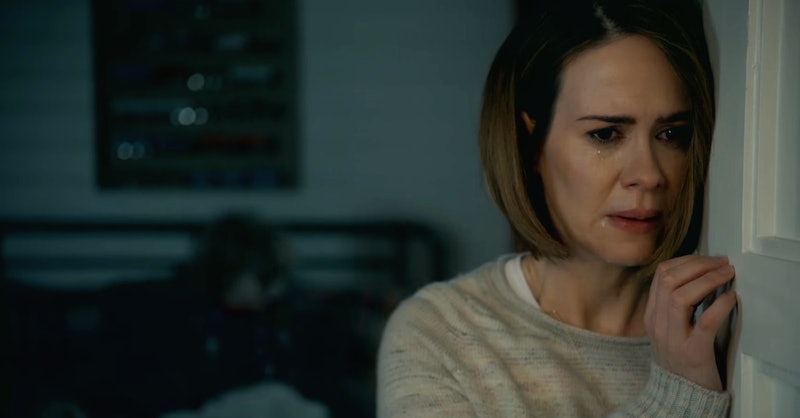 Unlike with Season 6, Ryan Murphy and FX have been providing plenty of information about the seventh installment of American Horror Story in anticipation of the premiere on Sept. 5. And while there are two very familiar faces leading Season 7, the cast of American Horror Story: Cult isn't as jam-packed with regulars as previous seasons. That means you shouldn't expect to see Kathy Bates, Angela Bassett, Lily Rabe, or even (very sadly) Denis O'Hare. And as much as American Horror Story fans want it, Jessica Lange isn't going to be in Cult either. However, don't let the actors who are missing from Cult put a damper on your excitement for the new season because it's still going to be one wild ride.

With AHS regulars Sarah Paulson and Evan Peters starring this season, you know you're going to be in good hands with Cult, which kicks off on the night of the 2016 presidential election. Although the election is a jumping off point for the season, Hillary Clinton and Donald Trump aren't cast members of Cult since both of them only appear in real news footage. But who needs them with a cast that has Paulson, Peters, and newbies like Billy Eichner and Lena Dunham?

How Murphy will connect the presidential election to clowns and cults will be revealed throughout Season 7's 11 episodes, and here's who you can look forward to seeing when American Horror Story: Cult premieres.

What's American Horror Story without Sarah Paulson? She has been in every season of the franchise, as well as being in Murphy's other anthology series American Crime Story and Feud. For Cult, Paulson plays Ally Mayfair-Richards, whose fear of clowns comes back after Trump is elected president.

Like Paulson, Peters has never missed an installment of AHS, and, for Cult, Murphy said that Peters will be portraying six "cult leaders," according to what Murphy told TVLine. One of Peters' characters includes the above blue-haired Kai Anderson. He will also be playing takes on Charles Manson, David Koresh, Andy Warhol, and Jim Jones according to Murphy.

But Peters isn't the only nightmare-fuel if you have coulrophobia (the fear of clowns) like Paulson's character since John Carroll Lynch is reprising his Freak Show character Twisty The Clown. The Fargo and The Drew Carey Show actor was also in Hotel as John Wayne Gacy, so he's got a thing for playing serial killers on AHS.

Cheyenne Jackson's character Dr. Rudy Vincent is the therapist treating Ally for her fears. The actor and singer is going for a three-peat since he appeared in Hotel as fashion designer Will Drake and in Roanoke as the producer of the show within the show.

Although Carrie Fisher's daughter is new to the AHS franchise, she has worked with Murphy before in Scream Queens. Billie Lourd is Winter Anderson in Cult, Ally's son's new nanny — and with the same last name, she could potentially be Kai's sister.

Speaking of Ally's family, Paulson's character is married to Alison Pill's Ivy Mayfair-Richards. Pill hasn't been on AHS before, but she's a recognizable face to TV watchers because of her leading role on The Newsroom. She has also appeared in the movies Scott Pilgrim Vs. The World and Midnight In Paris.

Billy Eichner's Harrison Wilton moves in next door to Ally and Ivy and he's the reason for the bees since he's a beekeeper, as he revealed at MTV's Video Music Awards. Eichner is new to AHS, but he's no stranger to TV (or the street) since he's on the shows Difficult People, Friends From College, and (of course) Billy On The Street.

As Meadow Wilton, Leslie Grossman plays the wife of Eichner's character. She's also a newbie to AHS, but she has been on plenty of other Murphy shows, like Popular, Nip/Tuck, and The New Normal.

Even though Peters' character Kai would like chaos to ensue, the police still need to do their job and Colton Haynes portrays Detective Samuels. Haynes hasn't been on AHS before, but he was on Scream Queens, though he is best known for his time on Teen Wolf.

Adina Porter was in Season 1 of American Horror Story, but Roanoke had the True Blood actor in a lead role. (She also appeared in The Newsroom, like Pill.) This time around, Porter plays reporter Beverly Hope.

Cult marks Emma Roberts' first time back on AHS since her lead roles in Coven and Freak Show back in Seasons 3 and 4, respectively. TVLine reported that Murphy revealed that Roberts will only be in one episode as Serina Belinda, a reporter who gets a promotion over Porter's Beverly. Let's hope she has a scene with her on-again, off-again boyfriend Peters or her Scream Queens costar Lourd.

Chaz Bono was in Roanoke as one of the creepy Polks and he continues his creepy streak as Gary Longstreet in Cult — the one-handed supermarket clerk who supports Trump. With Cher's son in the show, it's no wonder that the music legend is speculated to have a role in Cult too.

In July, Murphy tweeted that Frances Conroy would be returning to AHS after appearing in Asylum, Coven, Freak Show, and Roanoke, but her Cult role is still unknown.

In the same tweet about Conroy, Murphy revealed that Mare Winningham of Coven, Freak Show, and Hotel, would also be back in a mysterious role.

With Girls finished, Dunham has more free time in her schedule, so she joined AHS. As already revealed by Murphy (and reported by TVLine), she's portraying the real-life person Valerie Solanas, who shot Andy Warhol in the '60s.

So while Cult's cast may not feature as many American Horror Story regulars as seasons past, it's still has plenty of famous faces to bring a good — and horrifying — time with this cast of characters.