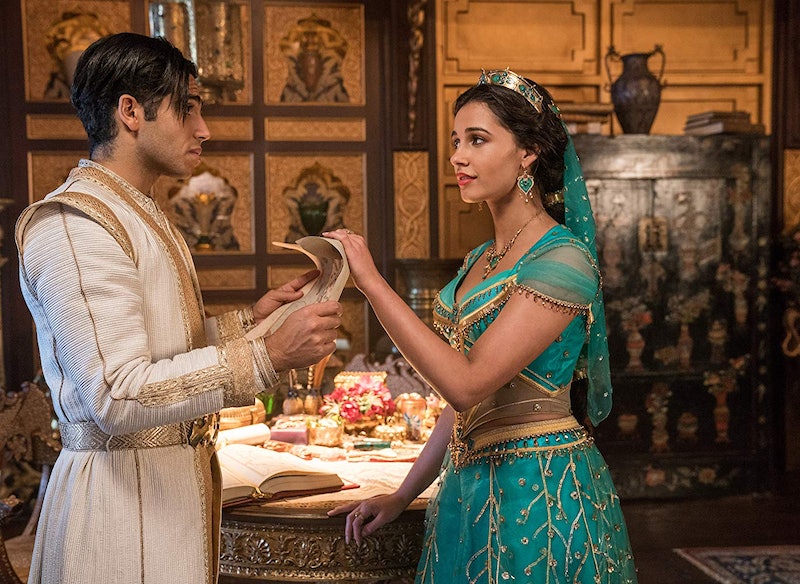 The Marvel Cinematic Universe is known for post-credit scenes and has popularized those teases to the point that audiences are expecting them in all kinds of major film releases. But there's no post-credits scene in the new Aladdin, which premieres on May 24. So when you see the live-action reboot, you can feel free to leave once the credits start to roll if you really need a bathroom break. But for those not of weak bladder, there are a couple of bonus music tracks not included in the movie that you might want to stay seated for. Spoilers ahead.

After the bonus dance number at Princess-turned-Sultan Jasmine (Naomi Scott) and Aladdin's (Mena Massoud) wedding reception, the credits begin, and in the background you'll hear Will Smith, who plays Genie in the movie, singing a "Friend Like Me" remix. This version of the song takes the classic, and turns it into something you've never heard it before, with new lyrics and added rap verses, as well as more sound effects and a funkier beat. Oh, and the track also happens to feature DJ Khaled.

This post-credits musical moment is definitely a throwback to Smith's Fresh Prince of Bel-Air days. Smith, who got his start as a rapper, shows that he's still got the chops that first got him to Hollywood. And there's also something very entertaining about hearing the Smith spit verses as DJ Khaled shouts his signature phrase — you know the one — in the background.

The credits music segues from that remix to Zayn and Zhavia Ward's rendition of "A Whole New World." The music video, shot in a dark yet warmly-lit Central Park, has garnered over 41 million views on YouTube since it debuted on May 9. Though you can listen to it now, it still might be worth sitting in the theater a little longer to hear the pair croon their own moodier version of the classic tune one more time.

The two credits song aren't the only new songs featured in this Aladdin. There's also a brand new solo for Princess Jasmine. The track, sung by Scott, is called "Speechless," and the lyrics are about Jasmine's refusal to go unheard. Previously, "A Whole New World" was the only chance the princess got to express herself in song. "Speechless" adds a whole new dimension to Jasmine's narrative, showing that she not only wants to be free from the palace walls, but that she also wants her voice and her ideas to be heard within them. Considering that the love story was the main focus of her storyline in the animated version, this is a much-needed step up for her character.

Whether or not you decide to sit through the credits to hear the movie's 2019 takes on "Friend Like Me" and "A Whole New World" just to have the full experience is entirely up to you. You can always just stream the full Aladdin soundtrack on DisneyMusicVEVO on YouTube. But you may not be quite ready to rejoin the real world immediately after watching the magical storyline play out. Either way, you don't have to stick around for a surprise tease of another one of Disney's upcoming live-action remakes.

More like this
This New 'Wakanda Forever' Character Was Planned Before Chadwick Boseman's Death
By Grace Wehniainen
The 'Love, Lizzo' Harry Styles Scene Is Just 1 Moment That Made Fans Feel Seen
By Brad Witter
The Meaningful Easter Egg In The 'Black Panther: Wakanda Forever' Soundtrack
By Grace Wehniainen
Olivia Wilde & Harry Styles Are Reportedly "Taking A Break" After Almost 2 Years
By Jake Viswanath and Radhika Menon
Get Even More From Bustle — Sign Up For The Newsletter