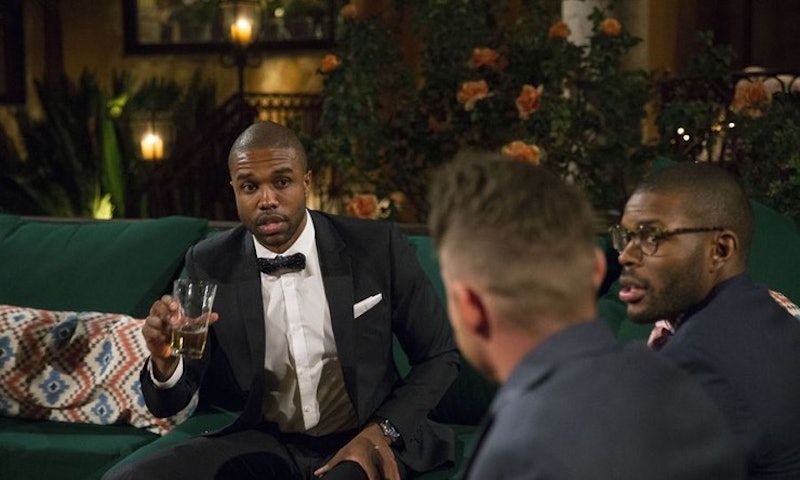 You're entitled to feel however you want about the allegations, but please don't blame the producer for the Bachelor in Paradise Season 4 suspension. It's still early, so very little has been confirmed, but preliminary reports include allegations that there was a reported sexual encounter between DeMario Jackson and a female contestant during which the latter was too inebriated to consent. Multiple outlets like PEOPLE and TMZ claim that this encounter was witnessed by a producer who allegedly wanted to intervene, but was reportedly prevented from doing so. This unnamed producer has now allegedly brought a "third party complaint" against Bachelor in Paradise, according to TMZ, which is what halted production on the show. However, in response, many fans have taken to social media with variations of the question, "Where did this producer think she worked?"

Update: In a video posted by TMZ, Jackson says "no comment" in response to numerous questions about the alleged incident. Asked if he's upset about reports alleging that Corinne Olympios claims she did not give consent, Jackson responded, ""No, no. I'm all good."

Earlier:: In a statement to Bustle, Warner Bros. responded to reports, saying, "We have become aware of allegations of misconduct on the set of Bachelor in Paradise in Mexico. We have suspended production and we are conducting a thorough investigation of these allegations." And, yes, there's a genuine possibility that, after the investigation, the show will not return for Season 4 — at least not on the original August premiere date. That's a real bummer for fans, there's no denying it. But whether Paradise is your favorite show, you hate it, or you don't care about it at all, the way we speak and think about this incident is really important.

The implication in the negative responses on social media is that, because this person was familiar with the conceit of the show, she should have been prepared for something like this while at work. Some people on Twitter went as far as to say that she should have kept her mouth shut. Or that, if their favorite show doesn't return this summer, it's her fault for being a prude or not keeping quiet.

We shouldn't and wouldn't speak about a victim this way, so it's confusing to me why people are speaking this way about someone who has allegedly advocated for one. I understand that people love Bachelor in Paradise, and they don't want to see it canceled. I don't either. But it's dangerous to try to dismiss or silence people for speaking up. Just because someone works in a nontraditional environment doesn't mean that they've signed away their agency or any less capable of noticing when a line has been crossed. And making these kinds of insensitive judgments about anyone — especially based on reports that have yet to be validated by anyone who actually knows the truth — is the wrong way to approach this news.

It's still not clear what's happened in this situation, and that's frustrating. All we have are allegations and unconfirmed rumors, anonymous sources and rampant speculation. But until we have a statement from any of the people actually involved in the alleged incident, the most compassionate thing we can do is to give the producer and all involved the benefit of the doubt.