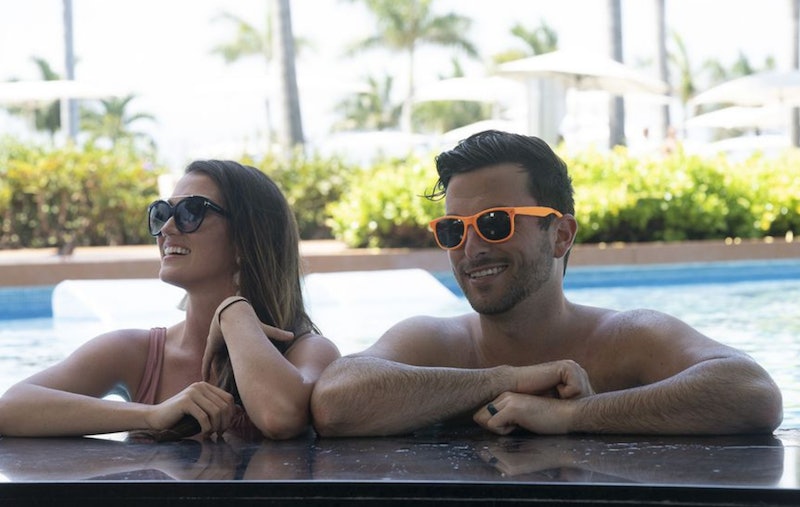 Unless you’ve been living under a closet door for the last week, you know that Bachelor in Paradise pair Jade Roper and Tanner Tolbert’s second kid was born on Monday, July 29. And maybe, just maybe, The Bachelorette finale helped Jade go into labor. As the couple revealed to Entertainment Tonight and People, Jade’s water broke while they were watching the first half of The Bachelorette Season 15 finale. “Her water actually broke at 9:16pm, as we were actually watching The Bachelorette,” Tanner told People. Well, if that isn't quite the Bachelor Nation-y turn of events.

After Jade’s water broke, Janner thought they had time to get ready and go to the hospital. “With Emmy, Jade labored for seven hours,” Tanner explained to People. “We called the midwife, we got the baby bag and Jade was going to take a quick bath to calm her body down. We weren’t going to take hours, but maybe 20-30 minutes.” But when Jade got out of the tub, she realized things were moving more quickly than she initially thought. “I got out of the tub and my contractions were so intense I couldn’t even keep on top of them,” she recalled. They considered trying to make it to the hospital, but Jade sensed there was no time. So, they called 911, hunkered down in the closet, and went into baby delivery mode.

Their son was born in their master bedroom closet about two weeks before he was due... and a little over an hour after Jade's water broke while they were in the middle of an episode of The Bachelorette. The thing that Bachelor In Paradise contestant Evan Bass joked might happen to him and Carly Waddell back in 2018? It actually happened to their pals Jade and Tanner.

It feels right that their son was born on the night of a Bachelorette finale. Jade, who was a contestant on Chris Soules's season of The Bachelor, and Tanner, who was a contestant on Kaitlyn Bristowe's season of The Bachelorette, connected on Bachelor In Paradise Season 2. They tied the knot at a Chris Harrison-officiated wedding ceremony on Jan. 24, 2016. The next year, Jade gave birth to their first child, Emerson.

Speaking of Bachelor In Paradise couples, another duo whose love story got its start on The Bachelor spinoff is kind of, sort of claiming they're behind the early delivery. Ashley Iaconetti, who is set to wed fellow Bachelor Nation member this month, told People that she brought Jade a very special salad that was supposed to kick off the labor process. Ashley I. said,

“Jade wasn’t going to be able to come to our wedding unless she gave birth by Aug. 1. That was her personal cut-off. So on July 27 we went to Orange County to visit and sleep over at Jade and Tanner’s, and we brought over this very famous salad from Studio City. Carson Daly’s wife was put into delivery after she had the salad, and Hilary Duff was spotted going to this place when she was pregnant.”

After news of the baby's birth broke, Jared tweeted, "Yay!!!!! I give 5% of the credit to the salad. Congrats guys. Can’t wait to meet him!"