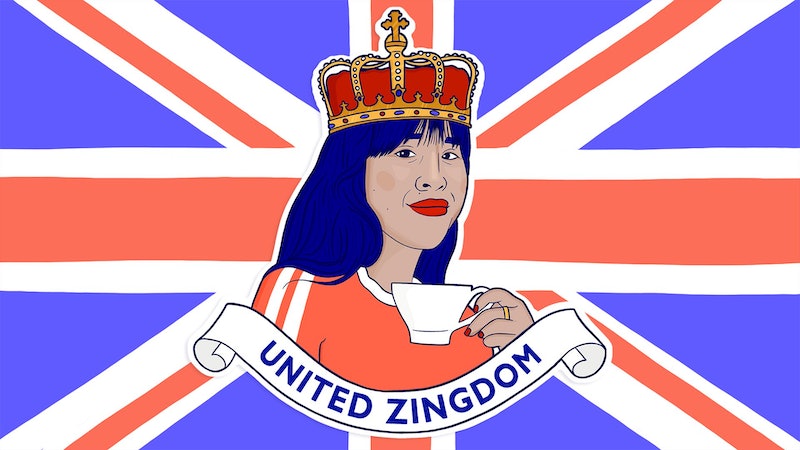 In recent years, much of the discourse around British identity has centred on division and polarisation, particularly after Brexit. A cursory glance at headlines (at least, pre-coronavirus, before everything was pandemic-related) and you could easily assume that Britishness is now inextricably linked with leaving the EU. But what about our identity beyond that? What's a true representation of being British today? These are the questions aksed by Singaporean-born, London-based Zing Tsjeng’s new BBC Sounds podcast, United Zingdom.

The podcast charts Tsjeng’s journey around the UK, as she decides whether to trade in her Singaporean passport for a British one, as Singapore doesn't allow dual citizenship. “Post-Brexit, there have been so many discussions about what Britain is, what do we stand for, what are the kind of people we want to be,” she tells me. “I think (we) need to differentiate between politics and current affairs, as political Britishness can be quite toxic sometimes.”

Tsjeng, who is also the executive editor of VICE UK and author of the Forgotten Women book series, has created the podcast as a positive contribution to the conversation. “I want to get past all the toxicity and all the negativity, to try and understand what being British is all about," she explains.

After moving from Singapore to London when she was 15, and spending most of her time since in the city, the podcast’s road-trip format was born out of a desire to find out what British identity looks like beyond the capital. “People talk a lot about the London bubble," Tsjeng says. "I definitely feel that way, in the sense that I have a really good idea of what it means to be a Londoner, but I have much vaguer ideas about what [being British] might mean outside the M25.”

So, what can we expect from United Zingdom? “In a nutshell, people can expect a funny, a hopefully insightful, occasionally moving exploration of what it means to be British,” Tsjeng tells me. “I think of this podcast as a really open-hearted and intimate way of exploring those issues, just by speaking to various British people around the country, from all walks of life, about what their identity means to them.”

The multi-faceted nature of British identity

Previously, for a VICE documentary, Tsjeng reported on activists who broke into Stansted Airport and chained themselves to an plane to stop a deportation flight. Throughout their trial, she spoke to people who were on the plane at the time, including a man who told her about his struggle to remain in the UK. “It was really emotional, he cried and I had to hold back tears myself,” Tsjeng recalls. “At the end of it I (thought) I’m in a really privileged position where I’ve got indefinite leave to remain, but here’s someone who would absolutely leap at the chance to get a British citizenship, so what’s stopping me from taking that step?”

The Windrush scandal is another incident that's given Tsjeng pause for thought. “I found these ideas of citizenship and belonging really important. [I decided] I needed to actually engage with them, deeply, rather than shoving them to the back of my mind.”

Focusing on the angle of belonging, Tsjeng discusses what makes for an inclusive country, city or community. “I went to Birmingham and spent time with Sum Ting Wong from Ru Paul’s Drag Race. She said what made her feel most at home was walking down the street and hearing dozens of different languages,” Tsjeng explains. “That was so interesting for me. I found it refreshing to hear that multiculturalism and diversity [is intrinsic] to her sense of what it means to be British.”

Tsjeng is adamant that being British doesn’t have to come at the expense of something else, as Britain allows for dual identity. “British identity is fluid and accommodating and welcoming," she says, comparing this to Singapore's strict single citizenship policy. "You can definitely have multiple different British identities: a lot of people on the podcast ended up discussing their regional identities, local identities, religious identities or ethnic identities. These things aren’t usually in opposition to the way they feel about being British.”

A sense of local identity is especially important for young people across the UK, Tsjeng discovered. “People talk so funnily and generously about the places they grew up in and find it so easy to identify with that city,” she tells me. “In certain places, like in Liverpool for instance, there’s definitely a much stronger sense of people identifying with their local area. It was the same in Wales – the people I met are very proud to be Welsh, and would first and foremost call themselves Welsh over British."

Meanwhile, Tsjeng tells me that the country as a whole was often distilled into clichés – the people she spoke to referenced the likes of Harry Potter and Buckingham Palace in relation to Britishness.

Settling down with the Brits

So, does Tsjeng now have a better sense of her own British identity? “Being British would symbolise making a commitment,” she says, explaining that a British passport would make her feel she's settling down with her partner. “This passport is saying I’ve chosen to stay with this person and this country. For the longest time, I’ve had one foot in, one foot out. But taking a British passport is [like saying] this is it; I’m spending the rest of my life with you. I’m in it for the long haul.”

Whatever Tsjeng decides, re her passport, the podcast gives us all a chance to reflect on our identity. She hopes listeners will "recognise themselves in what people tell me about what their British identity means to them.” As for non-Brit listeners? “I hope they’re able to experience Britain through my eyes and come away with a better understanding of what it’s like to live in the UK in 2020.”

More like this
'The Catch' Revisits A Famed Irish Filming Spot From 'The Tudors'
By Darshita Goyal
Eurovision Has Been Given A Whole New Look Ahead Of Its Liverpool Debut
By Bustle UK
This Is When Netflix Is Going To Start Charging You For Sharing Passwords
By Darshita Goyal
The SATC Stylist Revealed The Best (& Worst) Character To Dress
By Darshita Goyal
Get The Very Best Of Bustle/UK
Sign up for Bustle UK's twice-weekly newsletter, featuring the latest must-watch TV, moving personal stories, and expert advice on the hottest viral buys.