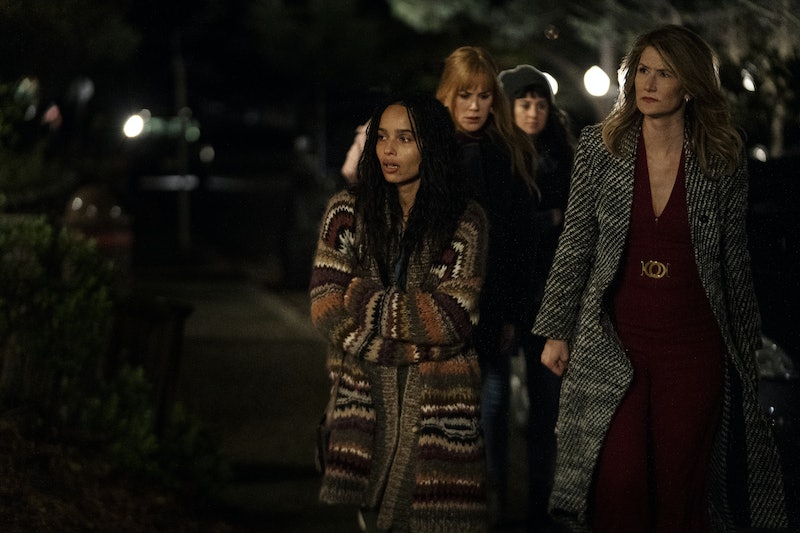 In an interview with Vanity Fair's Still Watching podcast, Jagannathan revealed that she was surprised to hear that Nicole Kidman is open to a BLL Season 3. Mostly, because she didn't think it was possible based on what she knew about this season's finale. Well, what she thought she knew. “I read the script and I watched yesterday’s episode and I was like, ‘Oh my god there might be a Season 3!’” she said. “It’s not the script I got!"

The Big Little Lies Season 2 finale ended with Celeste (Kidman), Madeline (Reese Witherspoon), Renata (Laura Dern), Jane (Shailene Woodley), and Bonnie (Zoë Kravitz) all walking into the Monterey Police Department together. But, Jagannathan said in the version she read "one character doesn’t even make it. One character dies. It’s a different script. This version left the door open on something I thought was definitely closed.”

Jagannathan didn't elaborate on which BLL character was almost killed off the show, but some are already guessing that it was Bonnie that didn't make it out of this season alive.

Bonnie was the one who struggled most with the death of Perry (Alexander Skarsgård), who was a serial abuser. No surprise, since she was the one who ultimately pushed him down the stairs as a way to keep him from hurting Celeste.

Throughout the season, Bonnie was shown to be nearly despondent as a result of the big little lie that the Monterey Five told in the aftermath of Perry's death. They were all involved in the cover-up, but it was Bonnie who risked the most by lying to the police. Especially since, as a Monterey lawyer told Bustle, Bonnie's confession might not lead to jail time since she could claim self-defense or self-defense of others. Basically, the lie wasn't as necessary as they may have first believed.

Another sign that Bonnie wasn't long for this world? Her mom's dreams. Bonnie was seen drowning in her mom's visions, which always felt like more of a metaphorical drowning in her guilt over the murder. But, perhaps, this was BLL foreshadowing her actual death.

Vanity Fair also gave another explanation for this finale change, the possibility that the script Jagannathan saw was actually a decoy to keep the real end from leaking. This was one of many tactics HBO took when it came to keeping the final season of Game Of Thrones spoiler free.

Whether it was a fake script or just an early draft, the fact that all five women are still alive after the Season 2 finale does leave the door open for another season. HBO president Casey Bloys told TVLine recently that it wasn't "realistic" for the series to continue. However, ending BLL on a cliffhanger makes room for more episodes if the women can find room in their busy schedules to actually film them.

So, for now the Monterey Five are safe. But if BLL returns, that could all very well change.