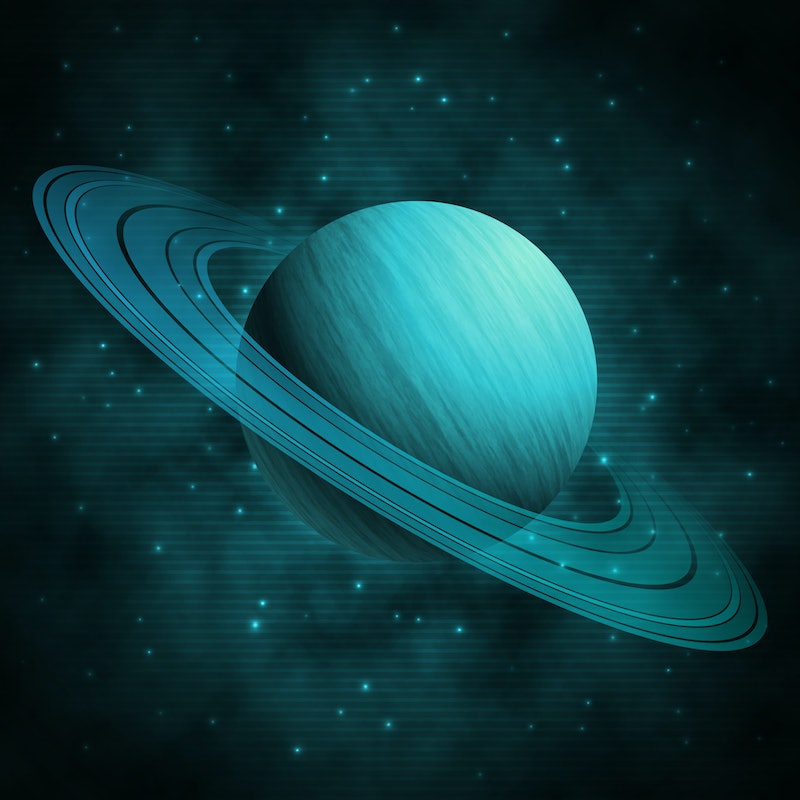 Most of us know the deal with Mercury retrograde periods already, as these infamous astrological transits have reputations marred by missed meetings, mixed signals, and misread text messages galore. But Mercury isn't the only planet that has retrogrades — in fact, Saturn retrograde 2020 officially started on May 10 and will remain on its backwards trajectory all the way through Sept. 29. Saturn is the super adult-y planet of tough love and responsibility, so you might be wondering how Saturn retrograde compares to Mercury retrograde. With five planets going retrograde this spring, it'll be helpful to know what to expect.

As a refresher, retrogrades in astrology are a regular part of almost every planet's cycle (with the exception of the sun and the moon, which never retrograde). When we say a planet is "retrograde," it simply means that from our vantage point here on earth, the planet appears to be moving backwards through the zodiac instead of forward — and astrologically, that can stir up some drama in the areas of our life that the planet rules. Retrogrades aren't inherently negative (especially if we know how to work with the retrograde energy), but they can certainly slow things down and force us to deal with our issues.

When it comes to Mercury retrograde versus Saturn retrograde, here's what you need to know.

Let's Start With The Specifics

We experience a Mercury retrograde period approximately three to four times per year, and for about three weeks at a time. The regular frequency with which Mercury takes a backspin is part of why this particular transit is so notorious and well-known, even among those who don't closely follow astrology. Although it can feel like a lifetime, Mercury retrograde periods are relatively short compared to other planets' — and this is due in part to the fact that Mercury is the closest planet to the sun, so it has a smaller orbit.

Saturn, however, resides much further away from the sun and retrogrades only once a year — but when it does, it stays retrograde for about four months, so we feel its effects for a longer consecutive period of time. While Saturn retrogrades comes less fast and furious than Mercury's do, Saturn retrograde effects still have a big impact on our lives.

Mercury Vs. Saturn: What Do They Mean In Astrology?

Each of the planets in astrology are believed to rule over different aspects of our lives — and the areas that each planet rules are also the areas that will be affected during one of its retrograde periods. That said, Saturn's retrograde will feel a lot different than Mercury's does.

"Saturn and Mercury are vastly different in nature and we experience their energies much differently," astrologer Leslie Hale of Keen.com tells Bustle. "Mercury is the planet ruling communication, speech and travel, and its [retrograde] is the most well-known (and disliked) because its affects are so much faster and more obvious." This is why Mercury retrograde causes so many snags in communication, scheduling, and getting from place to place.

But Saturn rules over an entirely different sector of our lives, so it asks us to reevaluate our boundaries and responsibilities to get a little more serious about where we're going in life. "Saturn is the planet of structure, limitation, and responsibility. This powerful planet retrogrades every year, but it doesn’t mean your life will be full of glitches and miscommunication like it is when Mercury retrogrades," Hale says. "Saturn is a slow-moving planet. With Saturn, our life evolves over time, and its changes are more evolutionary in nature [and] Saturn retrograde is a time to assess our general direction in life, as it relates to basic security on some level."

Saturn may focus on some heavy themes in our lives (I mean, boundaries, responsibilities, and restrictions aren't exactly feel-good topics), and its retrograde lasts for a good third of the year — but even still, this transit may not be as outwardly frustrating and obnoxious as Mercury retrograde. "During Mercury retrograde, communication and machines break down, miscommunication occurs, and people change their mind frequently," Hale says. "It can be maddening, but it serves a purpose."

Because Saturn retrograde is drawn out over a longer period, it works in a more subtle fashion. "During Saturn’s retrograde, we often become more concerned with the basics of business and work, and these things may move more slowly than we would like," Hale says. Saturn orbits further from the sun than some of the more personal planets (like Mercury, Venus, and Mars), so it affects things on a more long-term and foundational level. So while a Mercury transit can mix things up in a day-to-day sense, Saturn retrograde is more likely to cause us to reevaluate larger-scale issues, like our boundaries, our relationship to authority, and the responsibilities that fall on our shoulders.

What Are These Retrogrades Trying To Teach Us?

Mercury retrograde is a time to refine the way we express our ideas, slow down our schedules, and be extra cautious in communicating and moving forward on projects. Its retrogrades are annoying, yes, but they serve as tri-annual reminders to slow down and triple-check our work.

With Saturn retrograde, we're getting serious. It's a time to think about your future, learn from your mistakes, and evaluate how your past decisions have shaped the present, so we can live more responsibly. "Saturn retrograde gives us a four-month window of time to assess whether or not our activities are working out as planned, or if we should change direction," Hale says. "It can seem like a time of anxiety and limitation for some, but it important to remember its purpose is to help us take stock of important matters."

Saturn is known as the planet of tough love — but remember, at the core of tough love is just love, so the challenges are here to help us grow. "Saturn retrograde can manifest as sadness, depression or negativity," Hale says. "We should deal with these issues [as they come] so that when Saturn turns direct again, we are ready to move forward and be productive."

More like this
Your 2023 Retrograde Calendar — & How Each Affects You
By Brittany Beringer
Here’s Your Daily Horoscope For January 27, 2023
By Mecca Woods
These 4 Zodiac Signs Make The Best Bridesmaids
By Nina Kahn
Andie From 'How To Lose A Guy In 10 Days' Is A Total Gemini
By Nina Kahn
Get Even More From Bustle — Sign Up For The Newsletter
From hair trends to relationship advice, our daily newsletter has everything you need to sound like a person who’s on TikTok, even if you aren’t.