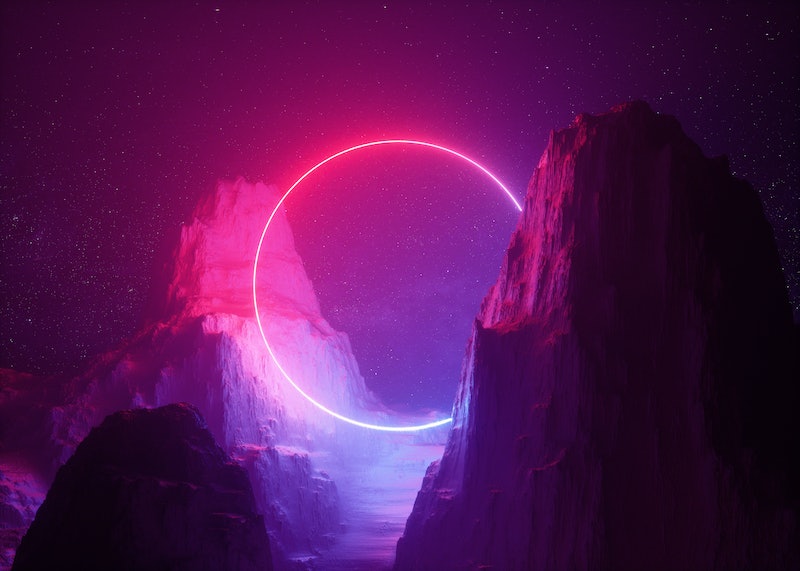 When it comes to notorious astrological transits, you don't have to be an astrologer to be familiar with the oft-dreaded Mercury retrograde periods, which litter the year with spells of confusion, typo-ridden texts, and traffic jams. These infamous transits are a good go-to for when we need to blame our troubles on the stars. But right now, we've got a different retrograde to deal with, and that's Pluto retrograde 2020, which begins on April 25 and lasts all the way through Oct. 5. This one lasts a long time, so it'll behoove us to get acquainted with its energy — but how does Pluto retrograde compare to Mercury retrograde? Pluto is serving up a whole different set of issues.

As a reminder, when a planet retrogrades in astrology, it means that it appears to move backwards on its course for a select amount of time — and that can cause all sorts of snags and slow-downs in our lives, especially within the areas that the retrograding planet rules. Retrogrades aren't a bad thing, but they do force us to take a long, hard look at various habits and happenings within our lives, and they can certainly be challenging.

When it comes to Mercury retrograde versus Pluto retrograde, here's what to know:

Let's Start With The Specifics

Mercury stations retrograde approximately three (but sometimes four) times per year, and each retrograde period lasts for about three weeks. Annoying? Yes. Long-lasting? No. Pluto, on the other hand, retrogrades only once a year — but its retrograde period lasts between five to six months. Whew. This makes a measly three weeks sound like a cake walk, right? But just because Pluto retrograde is long doesn't mean it's going to ruin all your plans. Pluto spends nearly half its time in a backspin — so you can sleep easy knowing that you've already spent a good portion of your life living through one of these transits and survived. Of course, that doesn't mean it's not without some consequences.

What's The Difference Between These Planets?

Each of the planets in astrology rules over a different part of our lives — and this dictates the way in which we feel their respective retrograde energies. "Mercury rules communication, and Pluto rules psychological matters and the subconscious," astrologer Lisa Stardust tells Bustle. In other words, "Pluto is about changes and Mercury is about thinking," according to Stardust — so their respective retrograde periods will force us to slow down and make adjustments in different areas of our lives.

Because Mercury rules over thinking and communication, things like timing, scheduling, writing, and speaking fall under its jurisdiction — that's why its retrogrades serve us mix-ups in these areas (hence the miscommunications and timing snags these periods are known for).

Pluto, on the other hand, rules over more intense matters, so we feel its retrograde energy differently. "Ruling over the realm of transformation and rebirth, Pluto is a generational planet that greatly affects the collective," astrologer Narayana Montúfar tells Bustle. "On a personal level, it rules how we channel our inner power, as well as what lays beneath the surface of our subconscious mind." Because Pluto is further away from the Earth and is known as more of a generational planet rather than a personal planet, the effects of its retrograde are likely to be felt on a grander scale that spans beyond our day-to-day habits.

Yes, Pluto is an intense and brooding planet with a looooong retrograde period — but that doesn't mean we're doomed to five months of retro-drama. "Unlike Mercury retrograde, the effects of Pluto retrograde are actually pretty subtle and not so in-your-face," Montúfar says. "Because Mercury is much closer to Earth, we tend to feel its effects in a more pronounced way, for a shorter amount of time." In other words, Mercury's retrograde periods hit us hard and fast — and they influence a lot of little things that are integral to conducting our daily affairs, such as putting together our schedules, getting from place to place, using our tech devices, and communicating with others. This is why we notice the effects so heavily.

Pluto retrograde, however, works on a slower and deeper level that we may not feel in the same obvious ways. "Pluto retrograde effects are deeper, long-lasting, and sometimes quite dark," Montúfar says. "So while the effects of Mercury retrograde are at the front-and-center of our conscious mind, those of Pluto are hidden below the surface." Pluto retrograde catalyzes major changes within us and in the foundation of our lives — but it does so in a less conspicuous way than Mercury that's more about a long-term shift than a short-term annoyance.

What Are These Retrogrades Trying To Teach Us?

Retrogrades don't exist within astrology to funk up your life. They're about slowing down and giving yourself a chance to revisit certain aspects of your life so you can make revisions and ensure you're on the right path. "Mercury retrograde is about reassessing the way we talk and think, whereas Pluto retrograde is about how we heal and transform our subconscious or psychological needs/desires," Stardust says. In Mercury's case, we have periodic opportunities throughout the year to make tweaks in the way we communicate and process information. In Pluto's case, we have a longer period of reflection that allows us more time to make existential paradigm shifts essential to our growth.

"In 2020, Pluto retrograde will help us process what needs to be mentally released in order for us to move forward with birthing a new life for ourselves," Montúfar says. It's about diving deep into major self-reflection in order to clean up the dust that's been collecting in our psychological closets. Between Mercury retrograde, Pluto retrograde, and the other planets that will be taking backspins in 2020, we all collectively have a lot of learning and growing to do.

More like this
Your December Astrological Forecast
By Nina Kahn
Here’s Your Daily Horoscope for December 5, 2022
By Mecca Woods
The Spiritual Meaning Of December 2022's Full Cold Moon
By Nina Kahn
7 Dos & Don'ts To Follow For The December 2022 Full Moon
By Brittany Beringer
Get Even More From Bustle — Sign Up For The Newsletter