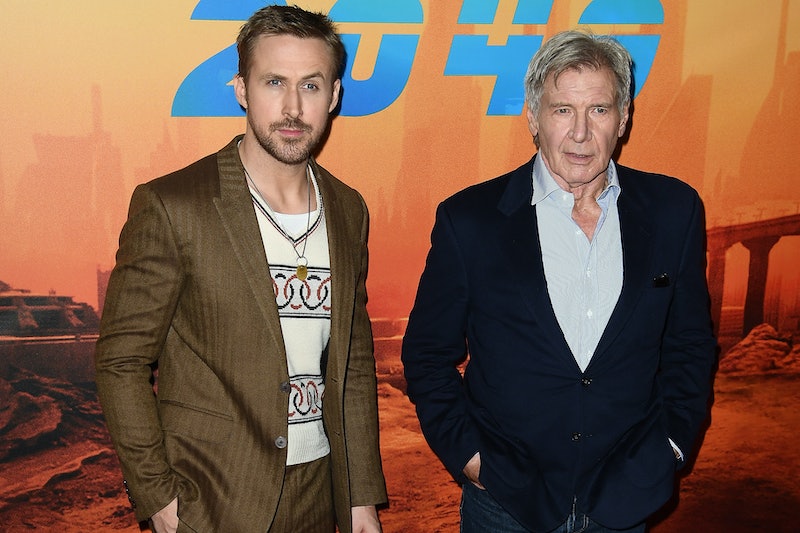 On Monday, Oct. 2, Americans woke up to news that a gunman had opened fire at Las Vegas country music concert on Sunday night, killing 59 and injuring more than 500. In the wake of the tragedy, Hollywood is doing its best to be respectful of all those affected by the shooting. According to The Hollywood Reporter, the Marshall and Blade Runner 2049 red carpet premieres have been canceled out of respect for the victims.

"On this day of national mourning, we have decided to cancel tonight’s scheduled red carpet premiere of Marshall. Instead, tonight's event will be a private screening of the film for the cast, filmmakers and invited guests. Our thoughts are with the victims of the tragedy in Las Vegas, their families and all of those affected."

Warner Bros. Pictures, Sony Pictures, and Alcon Entertainment issued a similar statement in regards to Blade Rummer 2049's red carpet premiere. The studios said, "We join the rest of the country in sending heartfelt thoughts and prayers to all those affected by this tragedy."

In addition to the red carpet events being canceled, the CW has also decided to reschedule the planned two-night airing of the 2017 iHeartRadio Music Festival. The festival was held on September 22 and 23 in Las Vegas, and part of the festivities took place at the same location as the Route 91 country music festival where the shooting happened on Sunday night.

Deadline reported that the CW issued the following statement about the postponement of the concert's airing, "Out of respect to the victims of last Sunday's terrible tragedy in Las Vegas, and their families, The CW Network and iHeartMedia will be postponing this week's TV broadcast of the iHeartRadio Music Festival. New broadcast dates will be announced at a later time."

These Hollywood postponements are making a clear statement that this is the time to honor those who lost their lives or were injured in the Las Vegas shooting. As the deadliest mass shooting on record in American history, the terrible events of Monday night are at the forefront of the country's mind. Now is a time of mourning, even for the entertainment industry.

Live shows like TRL and Dancing With the Stars opened their Monday episodes with tributes to the Las Vegas victims. MTV's rebooted TRL even aired an anti-gun PSA encouraging its young viewers to speak out for common-sense gun laws to prevent future tragedies. Across all corners of Hollywood it was clear that Monday was a day of heartbreak.

The fact that the shooting took place during a country music festival seemed to have made the tragedy hit close to home for the entertainment industry. Much as artists banded together in the aftermath of the terrorist attack at the Ariana Grande concert at the Manchester Arena in May, celebrities spent Monday offering their condolences and speaking out against the shocking act of violence. Grande herself spoke out in the wake of the Las Vegas shooting, calling for gun control and unity.

By canceling the red carpet events for Blade Runner 2049 and Marshall, Hollywood is putting the people of Las Vegas first. There will be a time for celebration again, but right now American's hearts and minds need to be with Las Vegas and all those affected by the shooting.