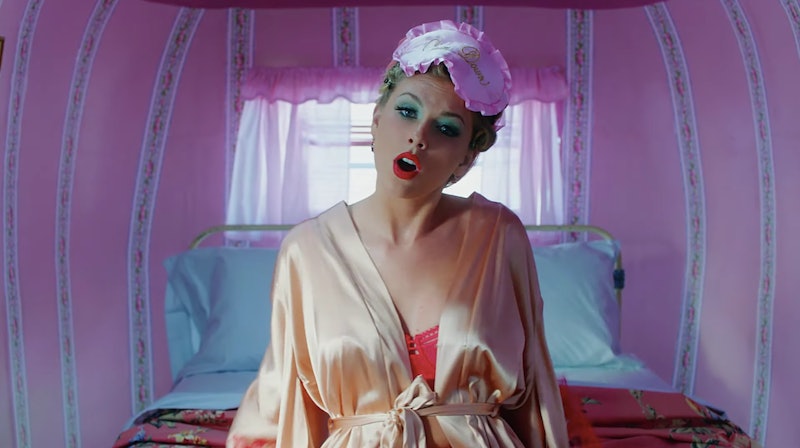 Every time Taylor Swift drops a music video, the internet collectively dons their detective hats, and this time is no exception. And the Cher quote in Swift's "You Need To Calm Down" video has stood out as a potential Easter Egg. And the shoutout might have a bigger significance than you think.

Swift dropped the "You Need To Calm Down" video on Monday, June 17. A colorful celebration of Pride Month and a diss to homophobes and Swift's haters alike, the video is full of hidden Easter eggs in the music video. And, while many are fixated on Swift's repaired relationship with Katy Perry or the many celebrity cameos in the video, Twitter user @TSwiftNZ recognized early on that Swift shouted out Cher in the video by including a line she said in a 1996 interview.

@TSwiftNZ, a fan account for Swift, tweeted on Monday morning that "Taylor referenced an iconic line from @cher in an interview she did in 1996 with Jane Pauley." The tweet included both a screenshot from the interview and a still of the painting in "You Need To Calm Down." The line in question is, "Mom, I am a rich man." But what exactly did that mean when Cher said it over 20 years ago, and why does it matter that Swift included it now, in 2019?

In the interview, which Cher did with Jane Pauley for Dateline, Pauley asked Cher about her belief that "a man is not a necessity, a man is a luxury." When Pauley questioned if Cher said that to be "mean and bitter," Cher defended her stance in a perfectly clear and awesomely feminist way. "I think men are the coolest," Cher explained. "But you don't really need them to live. My mom said to me, 'You know, sweetheart, one day you should settle down and marry a rich man. I said, 'Mom, I am a rich man.'" In other words, the quote is all about not needing a man to support you. Both Cher and Swift can support themselves. Moreover, it puts a spin on typical gender norms, which makes sense considering Swift's new video is all about being true to who you are, regardless of what other people think.

With "You Need To Calm Down," Swift is urging fans to support GLAAD and the Equality Act, which protects LGBTQ+ citizens from discrimination based on sexual orientation. Cher, meanwhile, is a vocal activist for LGBTQ+ rights — she has long been considered a "gay icon," and uses her platform to voice support for the trans community, which includes her son Chaz Bono. It would make sense, then, that Swift would want to follow Cher's example.

However, this Easter egg might go deeper than a simple nod to Cher. Swift has been accused of being too "boy-crazy" throughout her career, and is often criticized when she pens songs about the men in her life. The singer has pushed back against this idea with sarcasm, like with the lyrics of "Blank Space" and other past songs. By including Cher's commentary on the apparent superfluity of men ("like dessert," she says), and making herself the "rich man" as a sign of empowerment and autonomy, Swift is also rejecting the notion that she ever viewed men as something of huge importance, shutting down those "boy-crazy" complaints even more than she already did.

This possible call-out matches with the theme in some of the lyrics in "You Need To Calm Down," where Swift talks about strangers "taking shots" at her and "stressing and obsessing" about her life, especially her romantic life. The message Swift is sending is clear: she does not need a man, and if you have anything negative to say about that, you need to calm down.