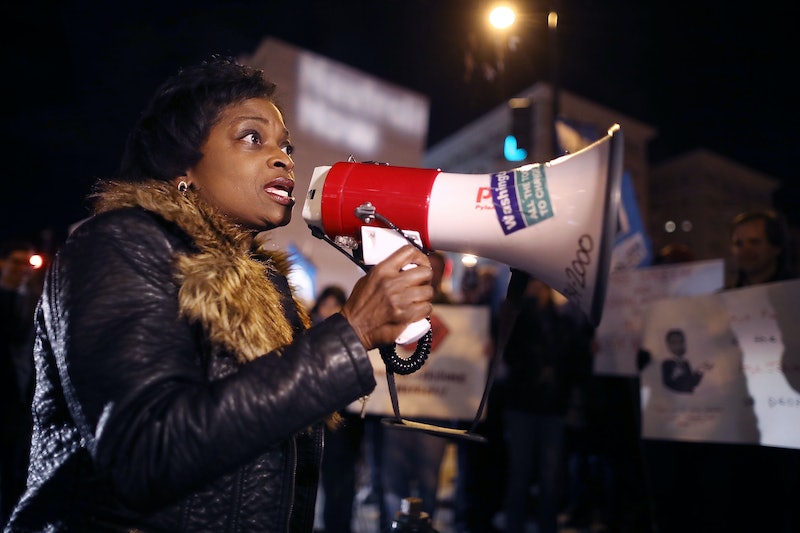 I'm not going to lie, I like to argue. And you know what? I'm good at it. I take on Donald Trump and his terrible policies for a living, and I'm not afraid to go head-to-head with any of his minions. And do you know why I'm not scared? I worked in the Obama White House. I spent years of my life crafting policies that protected the most vulnerable Americans. Every man, woman, and child in this country should have a shot at the American dream, and I'll be damned if I let anyone convince me otherwise.

Over the past few months, I've had the best time working as a Contributing Editor for Bustle. No, really. I wrote pieces on what it was like to wake up the morning after the Charlottesville attack; why student debt isn't just any issue, but a women's issue; and what Trump's decision to deport tens of thousands of Haitians means to me, as a Haitian American. It's been a great run.

But this might be the last time you hear from me.

Why? It's certainly not because I want to stop raising my voice against this joke of an administration — far from it. It's because soon Trump and his cronies in the FCC might finally, finally, push their lopsided version of democracy onto the internet and drown out voices like mine by ending net neutrality. We need to raise our voices against the Trump administration's latest move to undermine free speech while we still can. But some people don't see it that way — so you have to get the word out before it's too late.

Argument 1: Net neutrality has nothing to do with free speech.

Companies like Comcast and Verizon keep saying getting rid of net neutrality will boost competition. But they've rallied against competition at every turn (like the attempted Time Warner-Comcast merger), so why do they suddenly care about competition? Answer: they don't. But saying ending net neutrality increases competition sounds a heck of a lot better than admitting the truth, which is that making the internet less equal for people means a lot more money for them.

But no one knows better than me what net neutrality will do to the freedom of speech. After all, I work at MoveOn, an organization dedicated to online organizing and engagement — we couldn't do what we do without a free and open internet. So, let me explain just what ending net neutrality would mean for free speech.

Back in 2015, the Obama administration put net neutrality rules into place. That basically means internet service providers like Verizon and Comcast can't favor certain websites over others. Without net neutrality, companies like Verizon could charge you more to access certain websites, intentionally slow down other websites, like competitors, and even block whatever websites they wanted. Basically, Verizon and Comcast would get to choose which voices were heard, and which weren't.

Of course, they've promised they'd never favor viewpoints over others, but can you imagine Comcast letting you read a news article that casts Comcast in a negative light if it had the power to block it? There'd be no limit to the kinds of things internet service providers could do to regulate and suppress speech.

The rules stopping this kind of nonsense have been in place since 2015, but last month, the Republican, Trump-appointed chairman of the FCC announced he'd be rolling back the rules Obama put into place. I'm not surprised, and you shouldn't be either.

Internet service providers are using competition as a smoke screen. But net neutrality has never been about competition, and never will be. This is about free speech, plain and simple.

Wrong. First off, this is America, so nothing affects everyone equally. That's just not how this country works. But more importantly, we need to understand the role the internet has played in opening up democracy. The internet is basically a vessel to accessing almost all of the information humans have ever created or discovered. Before the internet, information was much harder to come by — in the 1700s, the rich had their own libraries, and the poor might hope to own a book or two, if any. That let the children of the wealthy become more educated than the children of the impoverished, allowing the wealthy to have a stranglehold on more highly-paying jobs like the law or medicine while the poor were confined to lower-paying jobs.

Whose voices will be drowned out if net neutrality is overturned? It's the voices of those without power — those who, whether because of their skin color, or their sexual orientation, or their (lack of) familial wealth, lack the privilege to be heard.

The internet is a force for meritocracy. Reverting to an internet without net neutrality is basically saying "Let's give the microphones back to the same old, white men who have made all the decisions for most of history."

An end to net neutrality is an end to free speech. Period.

Argument 3: There's nothing I can do about it.

On Dec. 14, the FCC is scheduled to to vote on whether to rollback net neutrality. And based off the makeup of the board, it's likely pass.

But Congress can override the FCC, and create its own laws ensuring net neutrality. That's where we have the biggest opportunity to stop this blatant attack on free speech. It's time to start calling Congress in droves, to write op-eds in your local papers, to visit your representatives' district offices.

And of course, what better way to show how important the internet is for free speech than to use it as an organizing tool? Tweet at your members of Congress, post on Facebook, send emails. Do whatever it takes.

Because this latest attack? It's not just an attack on net neutrality — it's an attack on free speech, and worse, the speech of the oppressed and marginalized.

Do you want to have to pay $10 to hear voices like mine — the voice of a black, LGBTQ, Haitian-American immigrant? I didn't think so. That is why we need net neutrality.

More like this
Beyoncé & Madonna’s “Break My Soul” Remix Honors A Group Of Black Icons
By Stephanie Topacio Long
Are John Legend & Kanye West Still Friends? The Singer’s Latest Update Is Candid
By Brad Witter
Rishi Sunak's Wife Is Worth More Than The Queen
By El Hunt
It’s Official: The UK Is Hosting Eurovision 2023
By Sam Ramsden and Rachel Mantock
Get Even More From Bustle — Sign Up For The Newsletter