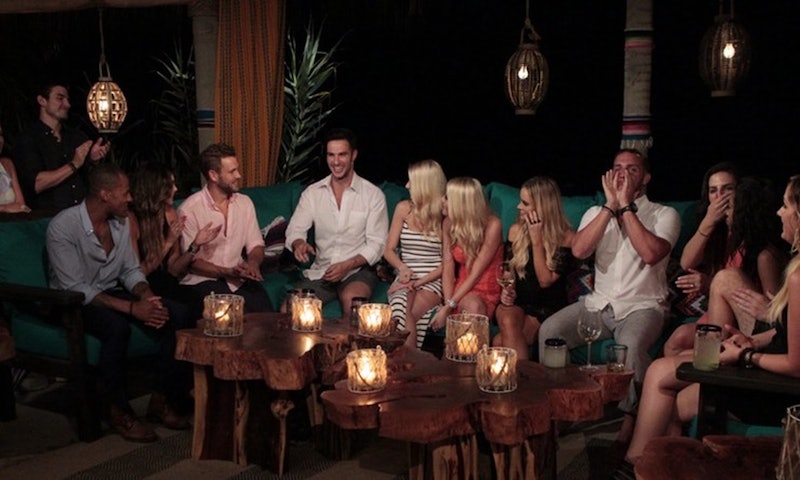 After Monday night's Bachelorette finale, Chris Harrison cashed in on his promise to air the first footage of Corinne and DeMario on Bachelor In Paradise. The clip dove right into the controversy, showing both how quickly the pair coupled off and how soon afterward the chaos arose. They're seen kissing and getting close in the pool, and then it cuts to fellow castmates' utter confusion when the two are swept off separately by producers and filming is shut down.

It's the first look at the incident since reports broke in June that Season 4 had temporarily suspended production. Soon after the encounter teased in the BiP footage, a crew member came forward with concerns that Olympios and Jackson had engaged in alleged sexual misconduct. Jackson repeatedly denied the claims, and after halting filming to investigate, Warner Bros. found no evidence of misconduct. Olympios' lawyers concluded their own investigation with the same findings, and Olympios released a statement saying she was satisfied with the outcome. Both Jackson and Olympios declined to return for the remainder of the Bachelor In Paradise season, but have confirmed they will appear on the reunion special at the end of the season.

In an interview with Entertainment Weekly earlier this month, host Chris Harrison detailed how the incident would be handled on-screen, telling the outlet it will "be literally dealt with the moment [the show comes] on the air" — a fact that seems substantiated by what's been shown so far.

Harrison continued to say that they'd shot three days worth of footage before shutting down, and that "a lot had actually happened" — a lot of people had arrived, there had been dates, and they'd gotten close to the first rose ceremony. So, the promo featured on Bachelorette is only a small taste of what's to come when Bachelor In Paradise airs Aug. 14, and for once, it actually seems like the most dramatic season yet.