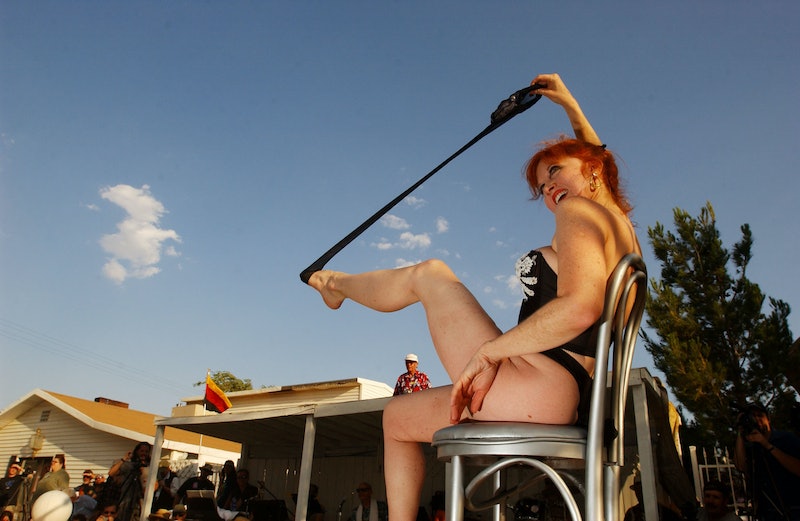 What happens in Vegas, stays in Vegas — but what if it didn’t have to? That’s the question posed by Polly Whittaker — better known as Polly Superstar — in the Kickstarter video raising money for the first ever Stripper Parade and Expo, which will take place in Las Vegas on August 10-12. Superstar, a veteran of the Bay Area sex-positive community who recently relocated to Las Vegas, joined forces with long time event producer Cory Mervis (Lady Merv) to create Nudge & Wink Productions. Their first event is honoring one group of workers who make Las Vegas so titillating.

The two-part event will consist of a massive parade in downtown Las Vegas, featuring art cars, floats, and — of course — strippers. Superstar likens it to a LGBTQ Pride parade, but celebrating a different kind of sexuality. While the parade will be open to the public, the Expo is only for strippers and supporters of the Kickstarter campaign. And Superstar thinks that Vegas is just the place for it all to go down.

But just because Vegas is comfortable celebrating sexuality and strippers, doesn’t mean the culture at large is. That’s what Superstar is pointing to in the Kickstarter video, when she asks what, exactly, is wrong about adults celebrating adult entertainment? She sees strippers as being on “the front lines of this moral dance the culture is doing right now” about sex in general and sex work in particular.

“I hear it even from liberal people, even from my friends,” Superstar says. “There’s this attitude around strippers — that they’re f*ck ups; they’re a mess; that they’re drug addicted or they can’t take care of themselves or they’re sad.”

Superstar, Mervis, and their Board of Smart Strippers (BOSS) — a group of industry veterans who are consulting on the project — know that stripping is often seen as shameful and strippers are viewed as a group to be pitied at best, reviled at worst. So they’re looking to not only change that perception via the Parade and the Stripper Showcase — which will feature stripper comedians, artists, musicians, storytellers, and performers who strip to support their art — but also support the strippers themselves.

“We really see them as underserved entrepreneurs who have a lot of needs,” Superstar says. “The story we’re hearing back is that they’ve felt very un-mentored in their careers and that there’s really no resources or help for this community. So they love the idea of this expo, because it provides resources for this next generation of strippers.”

In addition to career-focused help, the Expo will also offer workshops on self-care, wellness, how to deal with finances, how to set up a 401K, how to save and become a homeowner, and “how to deal with the reality of being an entrepreneur,” and how to connect to compassionate resources “that aren’t going to shame you for what you do.”

“Strippers have a hard time finding people who aren’t going to treat them badly and treat them like a second-class citizen,” Superstar says. “We really want to create something that puts the needs of strippers first.”

In order to bring their vision to life, Nudge & Wink Productions is running a 30-day Kickstarter campaign with a goal of raising $100,000. The money will be used to get the production company off the ground, as well as for deposits for the venues, equipment, rentals, legal fees, and paying people who will be working the event. In exchange for donations, they’re offering deeply discounted access to weekend events, including VIP passes to the Parade and a sunset pool party that will only be available to Kickstarter supporters. Other rewards include access to the Stripper Showcase and access to the Expo, which is only available to non-strippers if they donate to the campaign.

Superstar says that they chose to crowdfund because they “really want to focus on the needs of the community,” rather then be answerable to an outside investor. She points out that this is the only adult industry event that is truly for strippers.

“Most adult entertainment events — be it AVN (Adult Video News) or the Exotic Dancer Expo — are mainly geared toward the men, who are the consumers of adult entertainment, rather than the entertainers themselves and their needs,” Superstar says. “AVN is a great event — don’t get me wrong. I’m going next week. it’s just a different angle from the one we’re taking.”

If you’re into the angle they’re taking and either want to attend the event or just show your support for strippers and sex positivity, Superstar urges you to donate to their campaign and says “thank you for putting your digital dollars into our virtual g-string.” And she hopes that what happens in Vegas this August doesn’t even think about staying in Vegas.