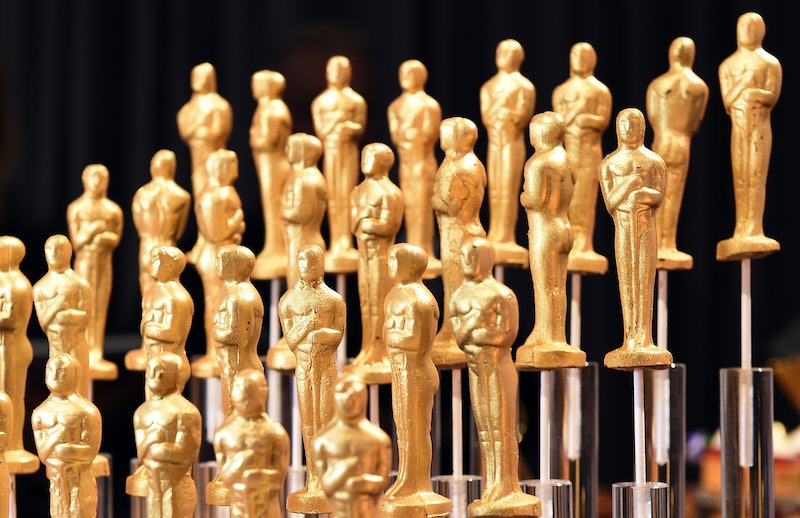 It's the biggest night in film, and it's finally here. The 2018 Oscars winners list is your one-stop study of who took home an Academy Award and earned the bragging rights over all of their peers — whether the viewing audience feels that the winner deserved the win or not. And the competition is fierce, fierce enough that there are few fans who can decide ahead of time which of their faves will take home the glamorous award. Which means that this list will give you something to talk about with your co-workers over the water cooler after months of arguing over whether the Best Director Oscar should go to Greta Gerwig or Jordan Peele.

Of course, the Oscars are not without their annual controversy. The ceremony has been criticized in the past for only nominating and awarding white excellence without even bothering to honor the talents of people of color. There's also the fact that women very rarely take home awards that aren't specifically designated to them. This year, all eyes are on the ceremony to see how they handle the ongoing Time's Up and #MeToo movements, as well as the myriad of other issues facing our country today.

No matter how you feel about the ceremony, millions of people will tune in to see if their expectations will be met or even exceed. So, without further ado, let's see who took home the golden statuette this time around.

The following list will be updated as the night goes on with winners' names changed to bold.

Best Actor In A Leading Role

Best Actress In A Leading Role

Best Actress In A Supporting Role

And there you have it. Happy awards season, and even happier debating with your co-workers over which winners are deserving and which you wish hadn't won.

More like this
What’s New On Netflix: 'Bridget Jones’s Diary' & 'Monster-in-Law'
By Arya Roshanian
What’s New On Netflix: Neil Patrick Harris’ Queer Rom-Com Series & More
By Arya Roshanian
Here’s Everything Coming To & Leaving Netflix In August
By Jake Viswanath
Brad Pitt Is A Huge Fan Of This British TV Show
By El Hunt
Get Even More From Bustle — Sign Up For The Newsletter