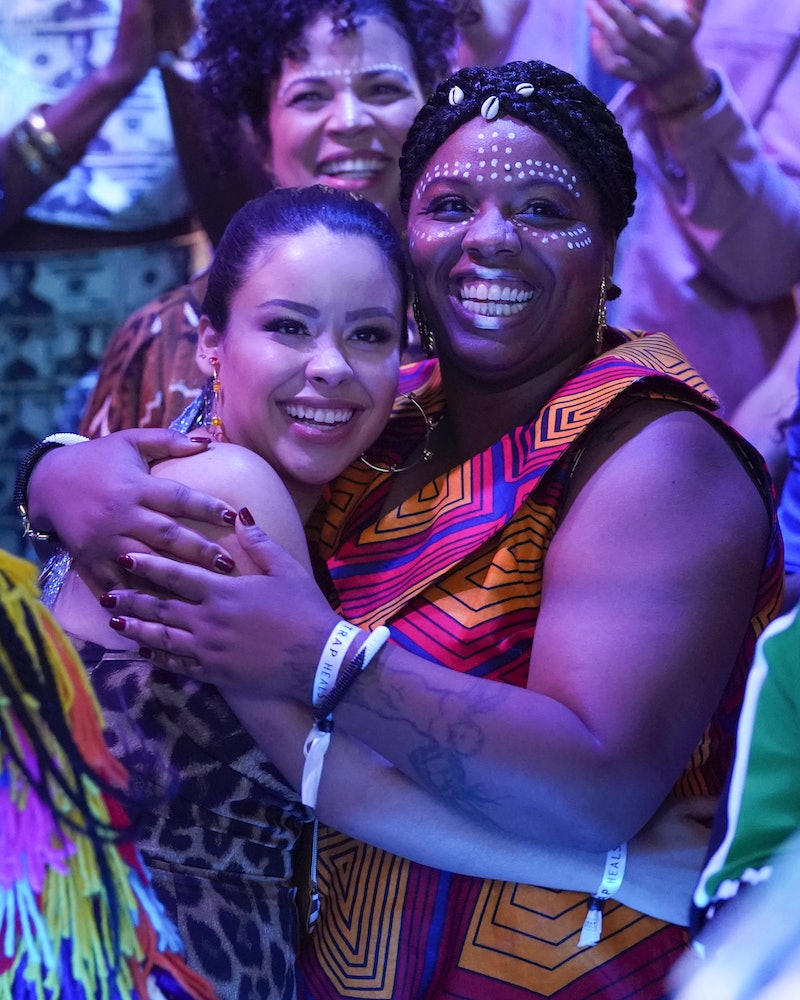 When you imagine a hip-hop event, you're probably not thinking of healing pods, Reiki healers, and bars stocked with alkaline water, which is precisely why the Good Trouble Season 2 finale flipped the script. The episode, titled "Trap Heals" after the real-life "cultural architecture firm" of the same name, saw Malika (Zuri Adele) bring to life a large scale activation that emphasized why self-care and art are vital components of activism, especially in the black community.

"Representation on network television is changing," Trap Heals founder and CEO Damon Turner tells Bustle. "To see a screen full of black folks enjoying one another, prioritizing their self-care, while at the same time turning up on some trap sh*t, that to me is just like a magical opportunity again to show people what is possible." "The Trap," which is rooted from Atlanta, is the "geographical space of marginalized people in low-income neighborhoods who create opportunities out of nothing." The collective debuted its first installation at Afropunk Atlanta in 2018, and for Turner, who also performed his song "God" during the episode, the goal is to provide healing in nature-inspired spaces for people who live in urban environments.

"We wanted to gently introduce these ideas of healing to folks who have often disregarded or discounted healing as just a 'white thing' to do," adds Turner. "This is for all people, so let's disarm folks by creating these really dope cultural experiences." The episode showed that narrative via Zuri's boyfriend Isaac (Sarunas Jackson), who until then had refused to believe that therapy could help his anxiety, but instead finds himself transformed.

Good Trouble's Trap Heals activation also featured a Black Lives Matter memorial to those who were killed by police, which helped Dennis (Josh Pence) re-frame the loss of his son. (He even participated in a prayer led by Melina Abdullah of BLM's Los Angeles chapter.) Also included were community-sourced pieces from artists like Damon Davis, Noé Olivas, and Los Angeles-based painter Gabe Gault, whose portrait of late rapper Nipsey Hussle is prominently featured in the space. "We're all deeply impacted by him and he was so important to us," Good Trouble writer and Black Lives Matter Global Network co-founder Patrisse Cullors explains to Bustle. "We really wanted to honor him with this beautiful image of him by a brilliant Black artist."

On a larger scale, Cullors, who's known and collaborated with Turner for about a decade, says the episode contributed to challenging what she called "awful" depictions of Black Lives Matter on TV. "I'm so tired of the activist story being angry protestors who are one-dimensional characters," she says. "You don't know how the protest happened, you don't know why they're really protesting, you're not even sure if the protest is the best idea. There's a strategy, and I think it's really important that people see the strategists that organizers are, and why strategy is so critical."

She also aims to portray Malika, who is based on Cullors, as more than "just" an activist. "We humanize our characters in that they're able to be both upset with the social issue but also be in love with their lives, and I think that's very important because that's much of what you see in our movement," adds Cullors.

Ultimately, art — whether it is a television show or a Trap Heals activation — is a moving force that "calls us into action in a way that no speech can, in a way that no essay can," she adds. With the Trap Heals team bringing "art, politics, and healing" into this episode, Cullors hoped to show that you can have a "full-on dance party" and recite 90-something names of black people killed by police in Los Angeles, as Dennis does in the episode.

As Cullors puts it, "Healing should happen with company in a collective, as a team, versus in isolation."