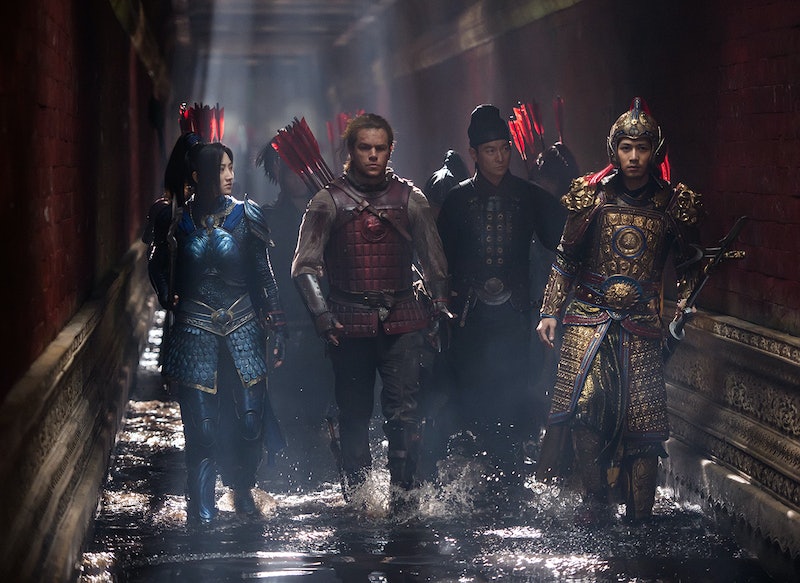 The first massive China-Hollywood co-production starring worldwide star Matt Damon, The Great Wall has been a bit of a lightening rod for controversy. The main point of contention — a white star playing the hero of China — has been front and center leading up to the movie's American release, and in interview after interview, Damon has defended the movie against accusations of whitewashing and of perpetuating a white savior narrative. There's very little credible defense there — the idea of a white man protecting the Chinese is an extremely frustrating and offensive storyline. Yet while The Great Wall's white savior narrative is undoubtedly problematic, the film actually succeeds in providing unprecedented visibility to an Asian cast in Hollywood.

When the movie begins, Damon's hero, William, stumbles onto the Great Wall of China with his friend, Tovar (Pedro Pascal), and is taken prisoner by the Nameless Order, a mysterious and enormous military force guarding the wall. He is quickly revealed as a valuable warrior, and, through various plot twists, becomes the key to saving China from the Tao Tei, the supernatural beasts attacking the Wall. In fact (slight spoiler alert), William doesn't just save China, he saves the entire world. Despite having studied the Tao Tei for centuries, the Chinese just can't figure out how to beat them, until William comes along. It's an eye-roll-inducing plot point that will come as no surprise to anyone who has ever seen an action movie. The white savior narrative is offensive, no question. But in my opinion, it's not a reason to discount The Great Wall completely.

Looking at the film through a Hollywood lens, dismissing The Great Wall because it stars Damon as a savior of China is not entirely beneficial, nor is it fair. The Great Wall's white savior tendencies are troubling, yes, but there's no denying the fact that the film is the most Asian-filled potential Hollywood blockbuster made in years. Damon, Pascal, and supporting star William Dafoe, are the only non-Chinese people seen onscreen. And in a movie that features hundreds of extras in any given shot, that means something.

Damon is a huge star, both worldwide and in Hollywood. He's made a career off his charming smile and an ability to represent the everyman (or at least every white man). In other words, he's the Hollywood standard for movie stars. But until now, he's never been a minority onscreen. Hollywood is, after all, a white actors' domain. The most diverse cast Damon has ever been a part of is Ocean's Eleven. In The Great Wall, however, Damon is surrounded by Chinese actors. It's incredibly rare that American audiences see a star of his stature act opposite actors of color, and, no matter how small a victory, the image of Damon surrounded by his Asian co-stars is significant.

That said, The Great Wall doesn't exactly serve to advance Asian American actors or roles. American audiences tend to view Asians on screen as an "other," even when they're playing American characters. The biggest Asian-starring hits in America are typically fantasy martial arts films like Crouching Tiger Hidden Dragon, and there is a strong tradition of othering Asian and Asian American characters in productions popular in America (think Slumdog Millionaire). In Hollywood blockbusters specifically, Asians are usually either immigrants (any Jackie Chan movie), glorified extras (see Jubilee in X-Men: Apocalypse), or erased and whitewashed (i.e. Doctor Strange, Ghost in the Shell). Set entirely in a medieval, mythical China, The Great Wall won't exactly help advance Asian characters beyond these tropes.

But it is notable that Damon's presence in The Great Wall has the potential to have a normalizing effect on the "other" (in this case, Chinese characters) because of his reputation as "America's actor." Seeing him share the screen with strong Asian characters in The Great Wall could potentially help audiences hesitant to accept diversity onscreen be more welcoming of it, specifically when it comes to Asian actors. It's a small consolation prize, to be sure. Hollywood shouldn't only be willing to put Asians front and center as long as there's a white star in the mix. But still, it's a start. Call me a pessimist, but right now, if this is what it takes to get more Asians onscreen in mainstream Hollywood, then I'll take it.

And The Great Wall director, Zhang Yimou (House of Flying Daggers) appears to share my attitude. In an interview with Entertainment Weekly, he described the film's American-China co-production style as "using Hollywood filmmaking to introduce Chinese culture". On this point, it's fair to say that The Great Wall succeeds, and one can only hope that the film encourages Hollywood to keep exploring Asian stories. It may not be much, but it's something, and that counts with me.