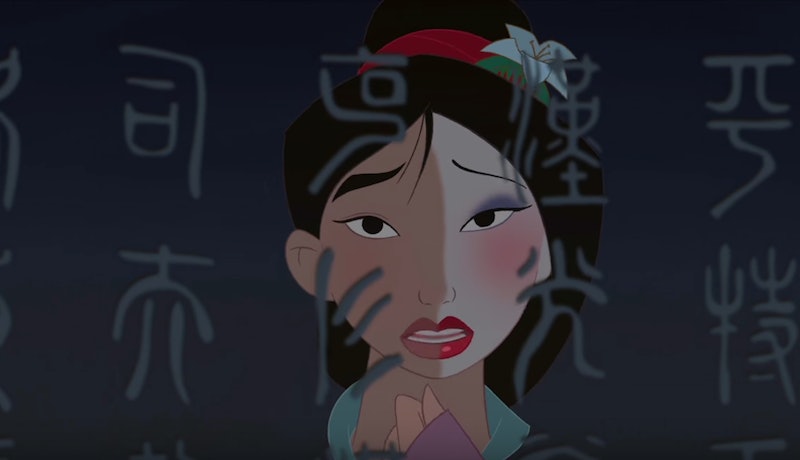 Lately, Disney's been on a live-action movie kick. After the success of Alice in Wonderland and The Jungle Book, the studio is making more new versions of their beloved animated films, with the upcoming Beauty and the Beast remake as well as, reportedly, both a live action 101 Dalmatians focusing on Cruella and a live action Dumbo. But what about Mulan? Rumors of a live action version of Mulan have been around for years, and yet, so far nothing has taken shape. In 2015, Disney reportedly bought a script for a live action Mulan according to The Hollywood Reporter, but there has been no official movement on the project since. And that's a problem, because in a Hollywood age where white actors are cast in Asian roles in many major Hollywood films and Asian stories are being co-opted, a live action Mulan movie is essential to give a voice to Asian actors and audiences.

Since Mulan's release in 1998, the female warrior who saved China by pretending to be a man to go to war has become one of the most influential Asian characters in pop culture. Mulan was one of Disney's most successful animated films, making over $120 million at the box office, according to Box Office Mojo. That's over $20 million more than the amounts made by Hercules and The Hunchback of Notre Dame, the studio's two most recent releases at the time, which both feature white male leads. The character of Mulan has become so beloved that she was even made an official Disney Princess by the company, despite not being of royal descent. Voiced by Ming-Na Wen, Mulan might be the most famous Asian action heroine of all time (at least where American film is concerned) — so it's ridiculous she hasn't yet been given her own live action remake.

Asian characters, specifically Asian women, rarely, if ever, lead Hollywood blockbusters. Whitewashing of roles meant for Asian women — such as Scarlett Johansson's casting in the adaptation of Japan's Ghost in the Shell , or Emma Stone's part-Asian character in Aloha , or Tilda Swinton's casting as a typically Tibetan character in Doctor Strange — is still incredibly popular in Hollywood. After Marvel received backlash for casting Swinton as the Ancient One, screenwriter C. Robert Cargill said that Marvel changed the character's ethnicity to avoid presenting another Asian stereotype, and by making The Ancient One Chinese, Japanese, or even just vaguely Asian, it would've been detrimental to on-screen diversity. "If you are telling me you think it's a good idea to cast a Chinese actress as a Tibetan character, you are out of your damn fool mind and have no idea what the f--k you're talking about," Cargill said on the Double Toasted podcast (via THR). An official response from Marvel echoed this idea, saying that the studio decided to make The Ancient One Celtic in an attempt to steer clear from the racist undertones in the original character. The studio "regularly departs from stereotypes and source materials to bring its MCU to life," an official spokesperson for Marvel told Variety.

It feels to me, though, that Hollywood has the attitude that it's simply easier to cast white actors in typically Asian roles rather than actually fleshing out the parts to not be stereotypes. And whitewashing isn't exclusive to live-action films, either. This summer, Laika released Kubo and the Two Strings, an animated movie about a Japanese boy set in a world of Japanese mythology. Despite the film's clear Asian setting, the film featured very few Asian voices in its main cast. The hero, Kubo, was played by Art Parkinson, a young white actor, as were his main sidekicks, Monkey (Charlize Theron) and Beetle (Matthew McConaughey). The supporting cast did feature a few Japanese American performers, including George Takei, but that doesn't erase the fact that a Japanese story was told without very many Japanese, or even non-white voices. Laika CEO Travis Knight defended the studio over accusations of whitewashing, saying, essentially, that they practice color-blind casting. "Ultimately, what matters most for us is the ability for an actor to convey the nuance and the emotional truth of the role," he said in an interview with BuzzFeed. Yet this argument is not only idealistic, but foolish. If the studio had tried to look further than Hollywood stars for the cast, they could have found Asian voice actors perfect for the roles. It is possible to make a successful animated film about Asian characters with Asian actors — just look at Mulan.

As a result of all this whitewashing, there are barely any roles available for Asian actors, both on TV and in film. Yes, television is advancing, with shows like Dr. Ken, Fresh off the Boat, Elementary, and Hawaii 5-0 all featuring Asian American leads, but there is still quite a lot of work to be done. A 2016 study conducted by USC's Annenberg School of Communication and Journalism studying diversity in 10 major Hollywood studios and networks — films released in 2014 and television shows running from Sept. 2014-Aug. 2015 — found that 50% of the content studied had no Asian or Asian American characters.

But it's not just the lack of roles that's a problem. It will be encouraged and accepted for networks and studios to hire white actors to play Asian roles as long as there continue to be no major Asian American movie stars. If Hollywood feels that there are no bankable Asian actors to take on leading roles, they won't put effort into making big budget movies starring Asian characters. It's a poor excuse, one recent Emmy winner Alan Yang called "cowardly" in an interview with The Hollywood Reporter, noting that no actors can become movie stars without first given the opportunity to lead a film. "[Hollywood] cast Chris Pratt in Guardians of the Galaxy and Jurassic Park. He wasn't a movie star until they put him in those movies," Yang said.

Just last weekend, when Yang accepted his Emmy for Best Comedy Writing for Master of None with co-writer Aziz Ansari, he made a public call for more Asian representation in pop culture. "There's 17 million Asian Americans in this country, and 17 million Italian Americans. They have The Godfather, Goodfellas, Rocky, and The Sopranos. We've got Long Duk Dong," he said. There's a clear need for more representation, and a live action Mulan, featuring an all-Asian cast, could be a chance for Disney to lead the way in creating a more Asian-inclusive Hollywood.

If studios are too afraid to cast Asian leads because they're worried about box office numbers, Mulan is the perfect project. As a remake, a live action Mulan would already have a built in fanbase, and an engaged one at that. Plus, original Mulan Wen is a pretty big star these days, leading Agents of SHIELD on ABC — another Disney property — so giving her the lead role, or just a smaller cameo, would also bring audiences to the film. Furthermore, Mulan could give the film industry an opportunity to launch an actual Asian movie star. If the official excuse for whitewashing is going to be that there are no Asian movie stars to lead films, then how about we make one?

Besides, poor state of Asian representation in Hollywood aside, a live action Mulan would be a great idea simply because Mulan is a great film. It's got girl power, action, family drama, a love story, and a dragon — what more could you want? A live-action version of the film would be an automatic hit — and, by featuring an Asian cast, an example for the rest of Hollywood of what real representation looks like on-screen.

More like this
Gerard Butler Insisted On Adding This Pivotal Scene To 'Plane'
By Catharina Cheung
8 Charities To Donate To During Black History Month
By Alexis Morillo
These Artists Are Reimagining Black History Month To Create A Better Future
By Katie Mitchell
24 History-Making Black Women You Probably Didn't Learn About In School
By Ayana Lage and JR Thorpe
Get Even More From Bustle — Sign Up For The Newsletter
From hair trends to relationship advice, our daily newsletter has everything you need to sound like a person who’s on TikTok, even if you aren’t.