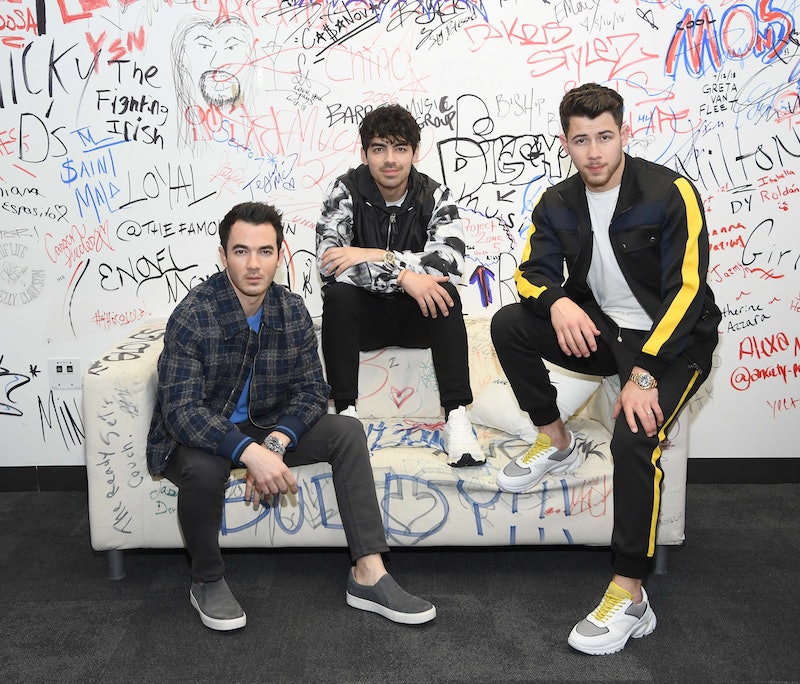 First they were "Burnin' Up," but soon they'll be "Cool"-ing off. Now that the Jonas Brothers are reunited (squeal), they're back in full force. After announcing their return to music with the Feb. 28 release of their song, "Sucker," the JoBros content has been non-stop ever since — not that we're complaining. It won't be long before fans get the next bop from the new-and-improved group. On Tuesday, April 2, the band announced that a new Jonas Brothers song is coming, and sooner than you think.

Per the official Jonas Brothers social media accounts, the new song, titled "Cool" will drop Friday and can be pre-saved at umusic.digital/cool/ or JonasBrothers.com. A photo for the song hints at the possible vibe of the new music that awaits fans. With a photo including poppy graphics and the brothers sporting sunglasses, and tropical-themed button-downs, one gets the feeling that this could be the song of the summer.

Not only does the official photo for "Cool" and announcement complete with palm tree emoji and sunglasses set the tone for what to expect, but Kevin, Joe, and Nick could have been dropping hints about the new tunes for weeks now. This isn't the first island-vibe appearance from the brothers, and we have a hard time believing it'll be the last.

Just last week, Joe Jonas posted a video of the trio on a much-needed vacation in Miami. In it, all three sang and sort of sway-danced to Kacey Musgrave's "Golden Hour," a song that has a very beachy, relaxed, and yet upbeat feel to it. Plus, those tropical shirts make a familiar appearance once again. Maybe the brothers are hinting at some of the musical inspiration behind their next crop of songs?

A snap seemingly taken from the music video for "Cool" shows Kevin, Nick, and Joe lounging on beach chairs by the water. Was the Miami getaway actual the shooting location for a "Cool" video?! Let the fan speculation and theories begin. A source for E! News gave some insight into what the brothers were shooting in Miami.

"They wore bright-colored retro suits for most of the shots and had a blast with the concept," the source said to E! News. "They filmed one scene on a boat and another at the pool at the International Inn with an audience of old ladies in bathing suits looking on as they performed."

"In another shot, the boys held up retro tanning reflectors as they sat in lawn chairs wearing brightly colored suits," according to the E! News eyewitnesses. "It was a fun day for them and in between takes they chatted with fans. They seemed to be having a lot of fun with it and enjoying their time in Miami."

Kevin seemingly confirmed this on his Insta last week, posting a photo of him in a full-on captain outfit, holding some exotic birds. Just when we thought the epic scale of the "Sucker" music video, complete with Kevin, Joe, and Nick's S.O.'s and a gorgeous castle couldn't be topped. Though the retro tropic attire was on full display in that vid, too.

The more laid-back and sun-tinged style will be a departure for the group, who spent many of their early days sporting skinny jeans, sleek blazers, and in the case of Joe, super straightened hair. Ahh, memories. But if an album and tour are *potentially* on their way, a brand new look could also be in the cards. But, fear not, the Jonas Brothers are still fully embracing their throwback hits for small performances and Carpool Karaoke. Could you imagine them not performing "Love Bug" or "Year 3000"?!

Those who have been holding out for a Jonas Brothers reunion, are now drowning in new developments with the band. From the upcoming release of "Cool" and "Sucker" becoming the JoBros' first Billboard No. 1 hit, to a new Amazon documentary about the brothers and song reality competition series, the Jonas Brothers' careers are burnin' up. Good thing a Cooldown is in their future.

More like this
Everything To Know About Taylor Swift’s 10th Studio Album, 'Midnights'
By Grace Wehniainen and Jake Viswanath
Dan Levy Appears In The Latest Teaser For The Weeknd's HBO Series, 'The Idol'
By Jake Viswanath
Everything You Need To Know About ‘Black Panther: Wakanda Forever’
By Bustle Editors
Beyoncé’s Special Tribute To Sister Solange Was Both Touching & Hilarious
By Stephanie Topacio Long
Get Even More From Bustle — Sign Up For The Newsletter