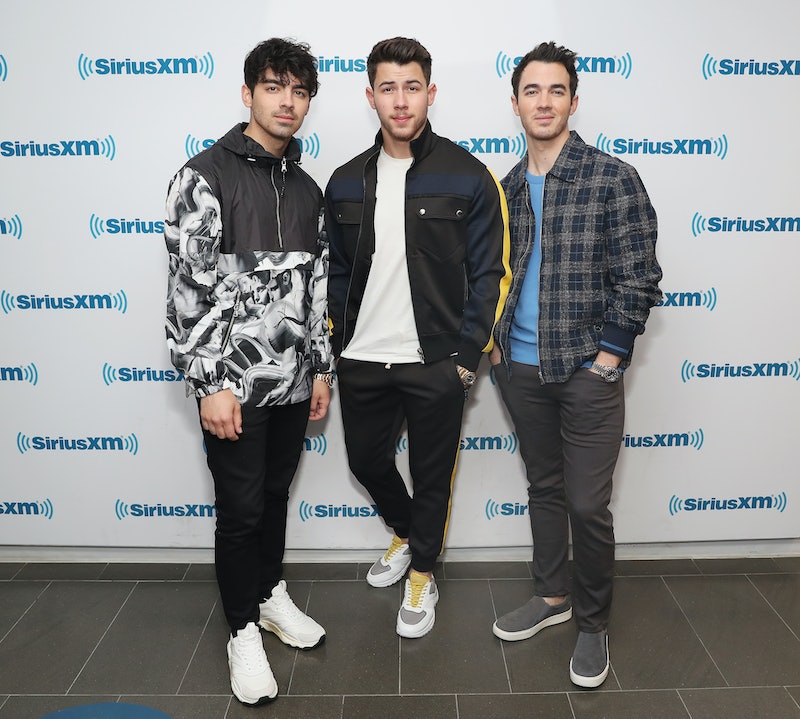 The Jonas brothers are true Beliebers. At least, that's what their latest Instagram and Twitter post suggest. The Jonas brothers' birthday message for Justin Bieber shows off the band's sense of humor, while also paying tribute to the Canadian singer, who turned 25 on March 1.

"Happy birthday King Bieber," the Jonas Brothers' caption reads. The photo features the three siblings crouching in front of a giant poster of the "Sorry" singer's face, with Nick and Kevin closing their eyes in a playful gesture of reverence.

The picture seems like a nod to the singers' mutual fandoms, and it's clear that the post is all in good fun. Bieber, like the Jonas Brothers, has enjoyed continued success in his music career, even as their fans have gotten older. And also like the Jonases, Bieber has settled down with his wife, Hailey Baldwin. (Kevin and Nick are both married, and Joe is engaged, too.)

The young stars are all grown up now, but they're still not afraid to joke around and just be silly with each other. Bieber hasn't responded to the Jonas Brothers' post yet — hopefully he gets as much of a kick out of seeing it as the band's fans did.

A number of fans hopped into the Jonas Brothers' replies to point out that Justin Bieber, like the Jonas Brothers, is abbreviated "JB." Yes, that doesn't mean a whole lot, but it does show how they're even further intertwined. And it is pretty funny to think about.

The Jonas Brothers haven't been back together as a band for long. So far, they have one new song, "Sucker," which was released at midnight on Friday. But it looks like they're diving into the reunion wholeheartedly, including posting fun photos like the one for Bieber's birthday.

As for "Sucker," it seems like fans are loving the new track so far. The song is at the top of the iTunes chart in the U.S., and people are tweeting and commenting on the Jonas Brothers' Instagram posts about how much they love the song. The "Sucker" video features appearances from Priyanka Chopra, Sophie Turner, and Danielle Jonas — a.k.a. the J. Sisters. The band members may have grown up, but they're finding new ways to incorporate where they are in their lives and with their partners into their music.

Bieber, meanwhile, has enjoyed birthday tributes from a number of fellow celebrities and coworkers. For example, Scooter Braun, Bieber's manager, shared a sweet throwback picture in honor of the singer's 25th birthday. The photo shows Braun meeting with a much-younger Bieber, before he became a mega-star. He wrote in the caption,

"Our first pic and now you are 25. My day 1. You know exactly what it is and how I feel. I love you. Happy birthday you grown ass man. Proud of you."

Bieber is 25, Frankie Jonas is 18, and the Jonas Brothers are back together. So, yes, millennials probably feel super old right now. But there's something fun about growing up with your favorite stars, too. The Jonas Brothers' latest photo shows that getting older doesn't have to be a bad thing, and it definitely doesn't mean you have to stop goofing off.