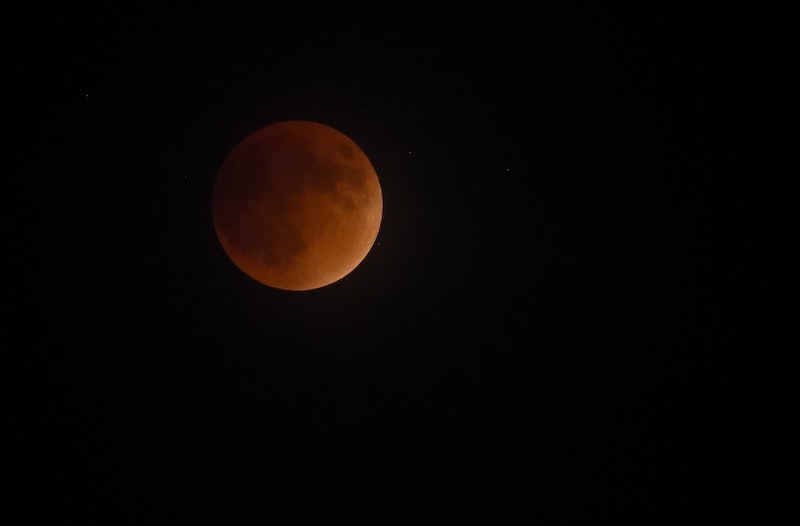 This last full week of July has been a pretty important one, astrologically speaking. On Wednesday, July 25, Mercury went retrograde for the second time in 2018. On Thursday, July 26, Leo season officially began, bringing a whole new energy and vibe to everyone. On Friday, July 27, a full blood moon, aka a total lunar eclipse, is rising in Aquarius. It's been a lot to take in, and we're all going to experience an emotionally charged few days. The July blood moon is happening during Mercury retrograde, and honestly, that's a little overwhelming to think about — but you should know what it means, so you can figure out what to expect.

Let's start with the blood moon. A blood moon is essentially another term for a total lunar eclipse, which happens when the Earth positions itself in between the moon and the sun. The Earth blocks the sun's light from the moon, casting a shadow over it that helps to make the moon appear to be a reddish-brown color - hence the name "blood moon."

Every full moon brings comes with a lot of new energy. According to astrologist Deborah King, "full moons stir up our emotions and amplify mystical powers connected to the human spirit." King says that this is a "powerful energy healing opportunity" to allow you to recharge, refresh, and get ready for something new. A blood moon is a full moon, so that energy will be there, but it also brings its own vibes. Astrology King's Jamie Partridge says that blood moons can be "emotionally challenging," leading to "reckless actions" and "aggression and emotional problems." In other words: the blood moon and the full moon will probably make you extra emotional.

Mercury retrograde is, of course, a tumultuous time on its own. About two or three times every year, the planet Mercury starts spinning slower than the Earth. If you looked at Mercury from Earth, it would appear to be moving backwards. This backwards "movement" throws everything off. Mercury is the ruler of communication, travel, and technology, and when it's in retrograde, it can negatively affect all of those things. Mercury retrograde can lead to issues communicating with the people you're closest to, travel mishaps, and otherwise silly mistakes that happen on a regular basis. This is starting right before the blood moon rises, which is going to make things a little tough for everyone.

Between the emotionally charged vibes of the blood moon and the out of whack energy from Mercury retrograde, you're probably going to spend the weekend feeling a bit off. But try to turn this into something positive! Any full moon is a chance to start fresh and focus on new things. Mercury retrograde, on the other hand, is a good time to reflect and think about the things that no longer serve you. Spend some time looking back on everything you've been doing and thinking, and figure out what you want to take with you into the future. The energy from the blood moon is going to encourage you to make a big decision, but just focus on planning and hold off on doing for a bit - at least until retrograde is done. You've got this!