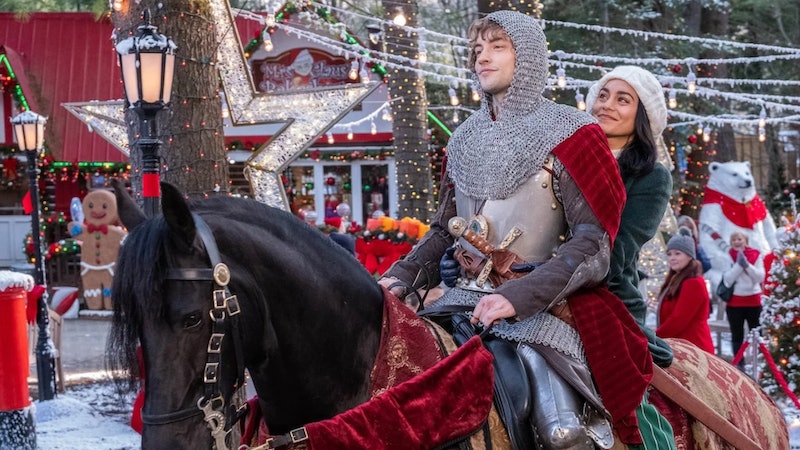 A Christmas Prince, the film that could be responsible for the renaissance of cheesy Christmas content, follows a journalist named Amber (Rose McIver) who is tasked to get the scoop on Prince Richard (Ben Lamb) of the fictional nation of Aldovia. The two inevitably fall in love. The Knight Before Christmas follows a school teacher named Brooke (Vanessa Hudgens) who falls in love with a medieval knight named Sir Cole (Josh Whitehouse) after he’s magically transported to modern day. In an email shared by Handler on Twitter on Nov. 21, two clues are presented as proof of the films’ connection: 1. A giant acorn ornament and 2. A Christmas Prince’s cameo in The Princess Switch.

In The Knight Before Christmas, there’s a nod to A Christmas Prince’s nation of Aldovia in the form of an acorn ornament. When Brooke’s sister and niece decorate the Christmas tree, her sister says, “Your grandma and grandpa picked this up on their trip to Aldovia.” The acorn is the same ornament that belonged to the former king of Aldovia in A Christmas Prince. The ornament is introduced when Amber joins the royal family to decorate the Christmas tree at the palace.

Due to this nod, it’s suggested that A Christmas Prince and The Princess Switch can’t exist in the same cinematic universe since one is but a mere holiday film in the other. It would thus make more sense for A Christmas Prince to exist in the same universe as The Knight Before Christmas. But of course, this is all mere speculation and theory. And you're not the only one who's confused.