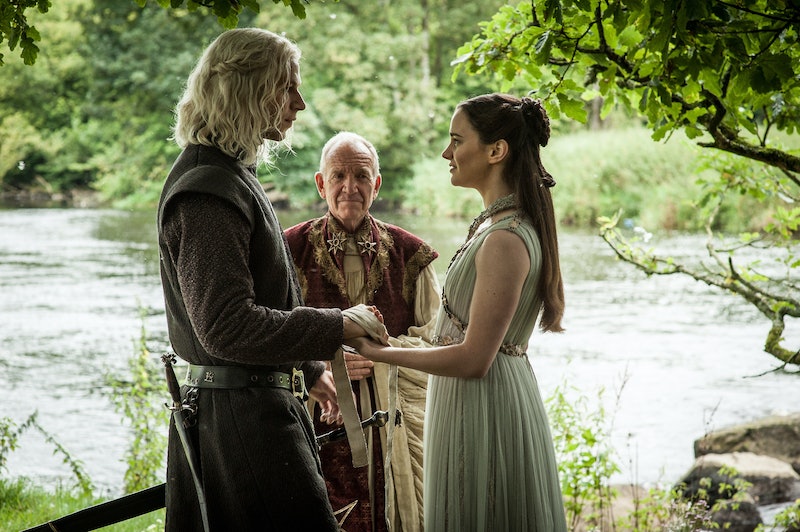 There are many (many) mysteries in the Game of Thrones books that never quite make it into the show. And for the most part... I get it. I understand that when you're making a TV show, it might make sense to cut the subplot about Rattleshirt secretly being Mance Rayder in disguise, or about how there are approximately 30 different Greyjoy uncles vying for power in the Iron Islands at any given time. There's just not time for all of the backstory and intricate plots-within-plots and secret baby drama.

But I do wish that we'd had just a little more time for the story about the Knight of the Laughing Tree. It might seem like just another one of the many random fragments of backstory in the vast world of Ice and Fire, but there's more to it than meets the eye.

When Bran is hanging out with Meera and Jojen Reed, you see, Meera tells him a story about a mystery knight who fought at a tourney years ago. She seems surprised that Bran's dad never told him this story before (honestly, Ned was probably too busy sitting quietly by himself and thinking about honor).

According to her story, Meera and Jojen's dad, Howland Reed, went to a big fancy Tourney at Harrenhal back when he was kid. But Howland immediately ran into some nasty bullies.

Three squires went after poor, petite Howland, who wasn't much of a fighter. But then a young Lyanna Stark came to his rescue—and as we know from Ned, Lyanna was a scrappy kid as well as a Horse Girl. Lyanna beat the squires off with a tourney sword. She then took Howland back to hang with the other Starks, including quiet little Ned. The kids all went to a feast together, where Prince Rhaegar Targaryen played the Westerosi equivalent of Wonderwall so beautifully that it made Lyanna cry (and then pour wine on her brother, after he teased her for crying).

The Starks offered Howland armor and a horse if he wanted to ride against the knights with the nasty, bully squires in the tournament. Howland wasn't too sure about that, though, since he was really a peaceful swamp boy at heart.

Nevertheless, a petite mystery knight showed up in the tournament the next day, with a laughing weirwood tree on their shield. The Knight of the Laughing Tree kept their face covered and wore mismatched armor, but they proved themselves to be a talented rider. They thoroughly thrashed the knights whose squires had bullied Howland, and demanded that the defeated knights teach their squires better manners. And then the mystery knight vanished without a trace.

The paranoid King Aerys was convinced that this knight was secretly out to get him, so he sent his hot and soulful son, Prince Rhaegar, to find out who the knight truly was.

This is where Meera ends her story, asking Bran if he knows the knight's identity.

Bran guesses Howland, because Bran is a Bad Listener and a pawn of the patriarchy.

Of course, Bran could technically be correct, since neither Meera nor GRRM ever confirm or deny his theory.

We know from Ned that Lyanna was a talented rider and "a lot like Arya," who also disdains traditional gender roles and loves to fight. As a Stark, Lyanna worshiped the Old Gods, so the weirwood tree on her shield makes sense. And as a teenage girl, she would have been shorter than most full-grown knights. She would have also needed to borrow armor, hence the knight's mismatched look.

Most importantly, though, Lyanna was clearly the most incensed by Howland's bullies. She shares Ned's obsession with honor and justice, except she has a lot more style and moxie.

So Lyanna was almost certainly the Knight of the Laughing Tree. But why does that matter in the grand scheme of A Song of Ice and Fire?

Because that's how she met Rhaegar Targaryen.

See, this is the same tournament that started all the drama over the Iron Throne. Prince Rhaegar defeated all the other knights but, when the time came for him to crown his lady as the Queen of Love and Beauty, he crowned Lyanna Stark over his own wife.

This made Robert Baratheon, who was betrothed to Lyanna, more than a little pissed.

Then Rhaegar "abducted" Lyanna, and a whole war kicked off. It ended with Rhaegar killed by Robert on the battlefield, and Lyanna dying *mysteriously* in a bed of blood, just as Ned Stark arrived at the Tower of Joy.

Of course, everyone knows by now that Lyanna actually died giving birth to the wee baby Jon Snow, who Ned took as his own "bastard" son. And Lyanna almost certainly wasn't kidnapped by Rhaegar: it seems like they eloped together before getting it on, making Jon a legitimate heir to the Iron Throne.

Most fans theorize that Rhaegar and Lyanna got married before a weirwood tree on the nearby Isle of Faces, in keeping with Lyanna's whole Old Gods thing. The Targaryens are pretty lax about polygamy, after all.

But the story about the Knight of the Laughing Tree is the final piece of that puzzle: when Rhaegar was sent to find the mystery knight, he must have found our girl Lyanna with some incriminating evidence of her disguise. Rather than drag her in front of his father, though, Rhaegar totally fell for this tough, justice-minded wolf girl. And she was already interested in the mopey, musically talented dragon prince.

And yes, their affair did set off a chain of events leading to continent-wide warfare and widespread destruction. But at least we know that Jon Snow's mom did it all to spare one small swamp boy from getting bullied... let's just hope that her son shares her desire to protect the shrimpy, and that he's able to somewhat clean up the international mess caused by his parents' love.