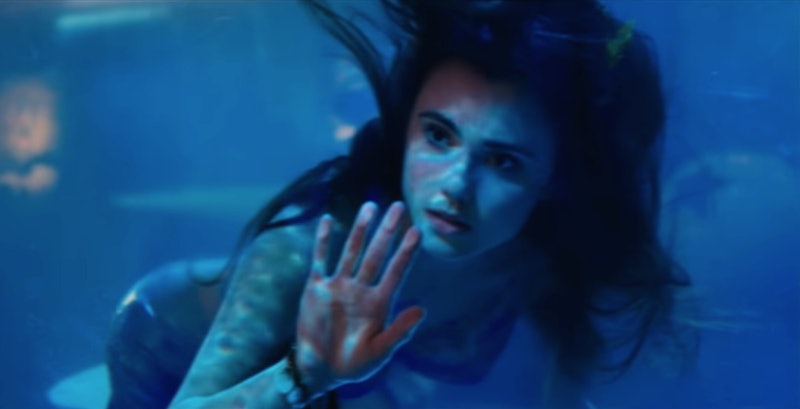 The Little Mermaid on YouTube
By Caitlin Gallagher
March 10, 2017

The original fairy tale of The Little Mermaid came from Hans Christian Andersen, but the Danish author's version has been eclipsed by Disney's animated retelling in recent years. Yet, the trailer for The Little Mermaid 2017 movie shows there are different ways to tell this classic story. Forget what you know about the mermaid who sold her voice to a sea witch for love and legs, because The Little Mermaid live-action movie from Conglomerate Media and Kingsway Productions is a whole new interpretation of this beloved tale.

The Little Mermaid trailer, which was released on March 9, kicks off with Shirley MacLaine telling two disbelieving little girls about the existence of mermaids. It then flashes to show a reporter, William Moseley of The Royals and The Chronicles of Narnia, being assigned a story about a woman in Mississippi who is being called a real mermaid. He brings his little sister (Loreto Peralta of Instructions Not Included), who just may be MacLaine's character as a young girl, to witness this fabled creature. Upon seeing "The Little Mermaid of the Mississippi" (Poppy Drayton of The Shannara Chronicles) at the circus, they realize there might be more truth to this story of the real-life mermaid than they had realized.

Besides it being about a mermaid, the premise is completely different than the Disney animated movie as there are no princes or singing crabs. Yet, there will still be music since Drayton's Elizabeth sings a song in the trailer. And while a character like Disney's epic villain Ursula is nowhere to be seen, there is a bad guy in this version of The Little Mermaid with Armando Gutierrez as Locke, who looks like he might have taken Elizabeth's soul. So, the story will still be full of music, magic, adventure, and suspense.

If you're intrigued by The Little Mermaid trailer less for the story and more for the actors involved, then you'll be interested to know that MacLaine and Drayton have worked together before on Downton Abbey. MacLaine famously portrayed Cora's mother, Martha Levinson, and during the Season 4 Christmas special, Drayton's character, Madeleine Allsopp, pursued Levinson's son — Paul Giamatti's Harold. And from what The Little Mermaid trailer shows, MacLaine's character may be the most affected by Drayton's Elizabeth if Peralta's Elle is indeed MacLaine's younger self.

Even with screen legend MacLaine, this retelling of Andersen's story probably won't become more popular than Disney's The Little Mermaid, which people are hoping will get its own live-action remake. Still, the 2017 movie does look like a family-friendly film that will bring the magic of mystical mermaids to mind and prove, once again, that the legend of The Little Mermaid is still able to capture children's imaginations and hearts.