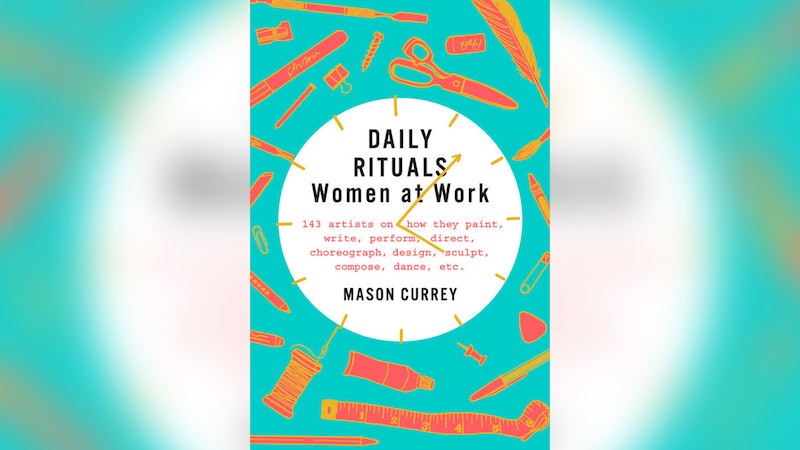 How does someone become a successful artist? Is it something they're born with, or does the secret lie in their daily routine? While the answer to that question isn't exactly clear, one thing is: people are obsessed with what their favorite writers, musicians, and performers do, and how they do it.

In Daily Rituals: Women at Work, author Mason Currey explores the routines of 143 writers, painters, performers, musicians, directors, composers, and more. In fascinating detail, he reveals how famous women at the top of their fields live, work, and create, from the time of day they wake up to the type of food they eat to the kinds of superstitions they follow. And although each artist has a wildly different routine — the Brontë sisters, for example, gathered at 9 p.m. every night to discuss their works in progress, whereas Virginia Woolf couldn't stand to write in the evening — Daily Rituals reveals they have all faced the same kinds of obstacles, all rooted in sexism, gender inequality, and creativity bias.

Throughout history, the creative endeavors of men have been nurtured, cultivated, and celebrated by people all around the world. The creative endeavors of women, on the other hand, have been downplayed, ignored, or outright discouraged. For centuries, a woman's place, according to most societies, has been in the domicile, tending to the needs of her husband, her children, and her home.

Just ask English poet Anne Bradstreet, the first published writer in the New England colonies, who composed her famous works only after the family went to bed. "The poet thought about her verse throughout the day, while minding the children, cooking family meals, or supervising the one or two female servants who performed the heaviest household chores," writes Currey in Daily Rituals, "but she wrote exclusively at night, while the family and servants slept, the only hours when she could be alone.”

Like so many successful women artists, past and present, Bradstreet had to create space for herself and her work, because her daily life was otherwise to restrictive. As a woman, as a wife, and as a mother, her domestic demands were supposed to be a priority, not her poetry. So late night writing it was.

When you are a woman, making that solitude is a lot easier said than done. That is why Ruth Asawa, a Japanese American artist who learned to draw in an internment camp during WWI, incorporated art into her daily life and duties as a mother. Currey writes, “she made her sculptures with the kids around her, whenever she could squeeze it in between other chores.”

The same can be said for Julie Mehretu, an artist whose massive Mural hung in the Goldman Sachs building in lower Manhattan in 2009. After having her two young sons, Mehretu says she has become more productive, despite working fewer hours at her studio. “I’ve been able to use my time much more wisely and more more potently, and I don’t waste as much time,” she said.

Generation after generation of women artists have been forced to shoulder all of the domestic responsibilities while at the same time attempting to create art at the same time, but family and housework aren't the only obstacles women face.

Science fiction legend Octavia Butler created her most famous works during the early morning hours. In order to support herself financially, Butler worked odd day jobs as a potato-chip inspector, a dishwasher, and a warehouse employee. “I felt like an animal, just living in order to survive," she once said. “But as long as I wrote, I felt that I was living in order to do something more, something I actually cared about.” She cared about writing so much, that she would wake up as early as two o'clock in the morning to do it before work.

Of course, Butler wasn't the only woman who had to balance financial responsibility with creative ambition. According to Daily Rituals, Louisa May Alcott "wrote the stories for money, often while working other jobs and attending to myriad domestic obligations," but the famous author "had long yearned to make the leap into more serious literature." Instead, she followed her father's wishes and wrote a "girl book," Little Women, which would become Alcott's most famous work, albeit one she had a total "lack of inspiration" for.

Being an artist is a difficult and demanding feat for anyone, but as Daily Rituals reveals, being a woman artist requires jumping constant hurdles in the form of forced domestic responsibility, everyday sexism, and an artistic culture of misogyny. To understand how artistic women, from America's first female poet to its most famous sci-fi writer, succeed despite those hurdles is to better understand the enduring strength of women. But, I think we can all agree, that it shouldn't be so hard.

More like this
Casey Anthony’s Father Said He Was “Ready To Forgive Her” Before She Renewed Allegations
By Brad Witter
Steve Banerjee's Wife Irene Sold The Chippendales Brand Prior To Her Death
By Brad Witter
How To Stream 'She Said' In The UK
By Maxine Harrison
Where Is John Leonard Now After Suing Pepsi For A Harrier Jet?
By Brad Witter
Get Even More From Bustle — Sign Up For The Newsletter