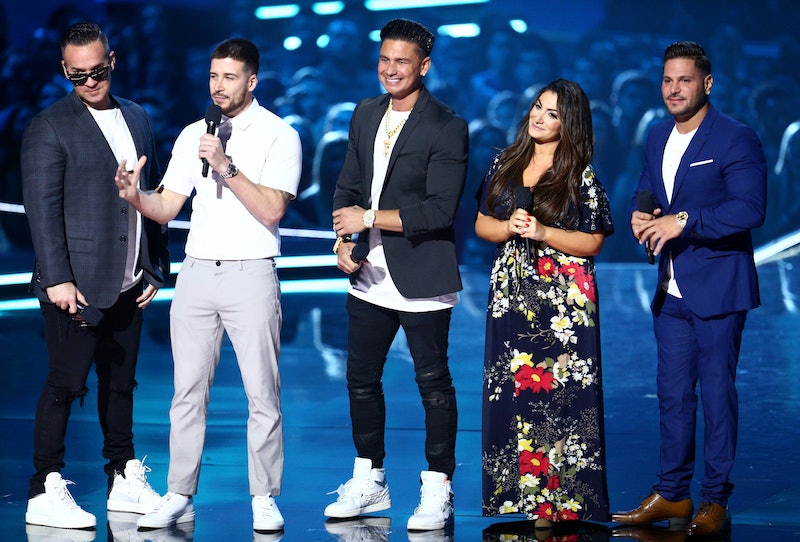 The second installment of Jersey Shore Family Vacation kicks things of with a cast trip to Las Vegas, and then the group heads to the place where they first met so many years ago: the Jersey Shore. But before they make their triumphant return to the Shore house, the Jersey Shore ensemble swings by a Sin City chapel and watches an Elvis impersonator officiate a wedding. And not just any wedding, but DJ Pauly D’s wedding. As someone wearing a veil slides a band on DJ Pauly D’s left ring finger, the Elvis impersonator announces, “Mr. and Mrs. Pauly D.”

See that gold watch? That is a very Pauly D watch. And as for that black jacket?

Who is that wearing the veil? Whose hands might those be? Could those hands belong to Scheana Marie from Vanderpump Rules? Or to Sophie Kasaei of Geordie Shore? Or to his Famously Single co-star Aubrey O'Day? Eh, probably not.

Let's take a closer look at those hairy forearms, shall we? That band on their wrist seems like something worth investigating. Now, who in DJ Pauly D's life wears a band just like that around their wrist?

Ah, right. That is not the only time we see that band pop up in the Jersey Shore Family Vacation Part 2 trailer.

There it is again.

And please let your eyes feast upon this screen grab is from the trailer for the first season of Jersey Shore Family Vacation.

You get the idea. The band on the wrist of Mrs. Pauly D looks a lot like the watch Vinny Guadagnino, Pauly D's co-star and BFF, wears. So there you have it. It looks like DJ Pauly D and Vinny got married in Vegas while filming Season 2 of Jersey Shore Family Vacation. The Case of DJ Pauly D's Rumored Reality TV Show Wedding has been closed. Awwww, yeah. Cased closed, yeah.