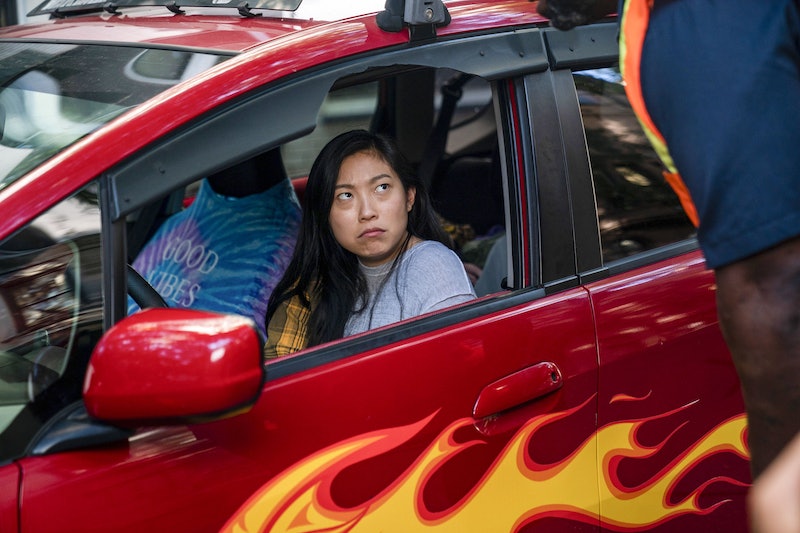 While Awkwafina's new Comedy Central series gives off Broad City vibes, Nora (from Queens) doesn't have a BFF by her side. Instead, the Nora from Queens cast is made up of actors portraying her family members, who in their way are like Nora's besties. The semiautobiographical show follows an aimless Nora living at home with her dad and grandmother in Queens, which is true to how Awkwafina (born Nora Lum) grew up living with her dad and grandmother. Plenty of other characters will enter Nora's hometown orbit, but her day-to-day life is all about her family.

From her viral music video "My Vag" to her Golden Globe-winning performance in The Farewell, Awkwafina is a bonafide star. After all, once you achieve fame with a one-name moniker, you know you've made it. Besides her own star power, she's also been in some major A-list projects, like Ocean's Eight, Crazy Rich Asians, and Jumanji: The Next Level. So she has rounded out her TV series with guest stars like Laverne Cox, Chris Gethard, Harry Shum Jr., Melissa Villaseñor, Ming-Na Wen, and Natasha Lyonne (who also directed an episode). Chrissie Fit, who played Flo in Pitch Perfect 2 and Pitch Perfect 3, also appears as Nora's high school friend Melanie.

But the main family unit that Nora interacts with on the regular is made up of her dad, grandmom, and cousin. Here's who's behind Nora's Queens crew.

Wong just completed his Emmy-nominated run as Whiterose on Mr. Robot and he's now getting to show his more humorous side as Nora's dad Wally. One of the leading Asian-American actors, Wong has won a Tony award for M. Butterfly and has been in movies like Father of the Bride, Jurassic Park, and Mulan and TV series like Oz and Law & Order: SVU. He also was in the first primetime sitcom to feature an Asian-American cast — Margaret Cho's All-American Girl.

Wong told Entertainment Weekly that he was already a fan of Awkwafina and had a chance to meet her real-life dad Wally once he joined the show. "I just jumped at the chance to do it," Wong told EW. "This was, to me, super refreshing, very different than anything I've ever done before."

Bowen Yang is having a major year after he became the first Asian-American cast member of Saturday Night Live. He solidified his SNL status with his "Trade Daddy" character on Weekend Update and his career is only going to get busier from here as he also has a role in the forthcoming indie drama Cicada. Yang's character Edmund doesn't live in Queens with Nora since he develops apps out in Palo Alto. But he and his vestigial tail do make frequent appearances to remind Nora that she's not as successful as her tech industry cousin.

Lori Tan Chinn as Nora's grandma just may be more outrageous than Awkwafina's character. She has a history with the actor portraying her son since she starred with Wong on Broadway in M. Butterfly. But she's probably best known for her role as Mei Chang in The Orange Is the New Black. She also had a memorable turn in Mickey Blue Eyes with Hugh Grant.

Awkwafina wrote for People how her grandma moved in with her and her dad after her mother passed away when Awkwafina was only 4. "I remember seeing my grandma as someone who was saving me," she wrote. "She was my best friend at a young age. She's snarky; she enjoys a good joke. Nothing was ever too dirty for her." So Chinn gets to channel Awkwafina's real-life grandma (who is reportedly still being her sassy self ) with hilarious results in Nora from Queens.

More like this
Hilary Duff's Husband Matthew Koma Has Her Name Tattooed On His Butt
By Jake Viswanath and Stephanie Downs
At 28, Rosie Perez Risked Her Career To Stop Playing Stereotypes
By Gabrielle Bondi
'The Crown' Season 6 Has Suspended Filming "Out Of Respect" For The Queen's Death
By Bustle Staff
Here’s Everything Coming To & Leaving Netflix In February
By Jake Viswanath
Get Even More From Bustle — Sign Up For The Newsletter
From hair trends to relationship advice, our daily newsletter has everything you need to sound like a person who’s on TikTok, even if you aren’t.

This article was originally published on Jan. 22, 2020