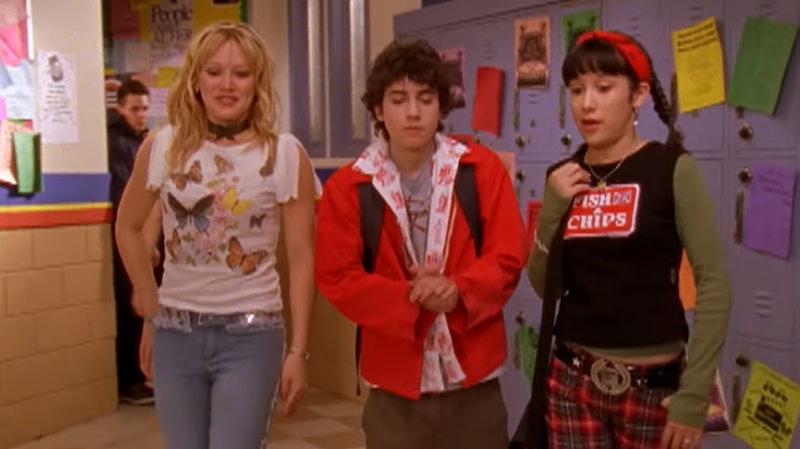 April showers may bring May flowers, but sometimes those showers give me the blues. Being stuck inside for any reason is a bummer, but you know what always makes me feel a little bit better? Marathon-watching hours upon hours of TV series. Chocolate helps too, but really, it's all about the TV marathons in my book.

And even when we're not stuck inside, the daily hustle of everyday life can leave even the most energetic among us exhausted — so every once in a while I'll choose to melt my brain by spending a good portion of my waking weekend hours watching shows. And my favorite way to do it is with the healing power of nostalgia. The classic tween- and teen-centric TV series of the '90s and early 2000s are not only incredible time capsules of now-vintage fashion inspiration (and fashion warnings), but they also offer up the warm, melt-y feeling of comfort that come from indulging in the ephemera of our childhoods.

So grab some snacks, gather up as many streaming service log-ins as you possibly can, and let's dive in to find out the classic and nostalgic TV series you should watch, based on your zodiac sign.

Aries, let's not lie — you live for the drama, and America's Next Top Model always delivers. This reality series became a staple of the early aughts and beyond. Between amateur model drama and supermodel host Tyra Banks' big personality and antics, you're in for a good time — and there are 24 entire seasons to enjoy. Now, you can start from the very beginning. Stream America's Next Top Model for free on Hulu.

Boy Meets World is the '90s TV show equivalent of a grounding meditation, in my opinion, which makes it ideal for an earthy Taurus who just wants to chill. The series follows Corey Matthews, his girlfriend Topanga (whom we love), and the rest of his family and friends through their tween and teen life lessons — filled with lots of laughs, and some tears, too. Stream Boy Meets World for free on Disney Plus.

When I say I love period pieces, this is what I'm talking about. This sitcom, which takes place in the '70s but launched in the late '90s, stars a young Mila Kunis and Ashton Kutcher — and its fast-paced, funny, frenetic episodes are wild enough to keep a quick-thinking Gemini's attention for a few hours. Plus, Jackie's outfits are everything. Stream That '70s Show for free on Netflix.

Ah, the coming-of-age tween show that defined all our childhoods — guaranteed to give all you Cancers the warm and fuzzies. This quirky series from the very early aughts follows the trials and tribulations of Lizzie and her tween friends, Miranda and Gordo, who are trying to navigate everything from puberty to popularity. It's also an absolute mecca of wacky Y2K hairstyles and department store fashions. Stream Lizzie McGuire for free on Disney Plus.

All hail the power of three! Another classic from the vault of the aughts, Charmed is the wicked show following three witchy sisters and their dramatic soap-opera-esque mystical adventures in the dark arts. It's dramatic and it's stylish — meaning that yes, it's very much made for you, Leo. Channel your inner Y2K witch and stream Charmed for free on Netflix.

I know nothing brings your detail-oriented brain more pleasure than organizing and planning, Virgo — so give yourself a break from planning your own life and indulge in the obsessive and ridiculous world of My Super Sweet Sixteen, the reality show from the mid-2000s that we love to hate, which features privileged teens planning the overindulgent birthday parties of a lifetime. Stream My Super Sweet Sixteen for free on Hulu.

'90s fashion, teen drama, and vampires — what more could we ask for? Buffy The Vampire Slayer is the teen horror/comedy/drama that delivers it all. Between the sartorial inspiration and justice-seeking Buffy's vampire-slaying ways, it's ideal for a balance-loving Libra. Enjoy this '90s classic that's stood the test of time and stream Buffy The Vampire Slayer for free on Hulu.

This is perhaps the quintessential coming-of-age show for angsty '90s teenagers everywhere. While there's sadly only one season, My So-Called Life perfectly captures the drama, heartbreak, and complication of being a teenager in a funny and raw way. Your angst-filled Scorpio heart will take solace in this gem of '90s emotion. Stream My So-Called Life for free on Amazon Prime.

No, not that teenage witch Sabrina — we're talkin' about the original series from the mid-'90s. Sabrina The Teenage Witch is a classic for a reason, as the sitcom delivers everything you could want from a teen comedy but adds a touch of witchcraft. As a Sag, you love to laugh, and this show will provide you with an endless storm of comic relief and some much-needed nostalgia all at once. Stream Sabrina The Teenage Witch on Hulu.

No matter how many times you've seen Daria, this classic angst-filled teen cartoon of the '90s never gets old — and it never stops being clever, funny, and relatable, either. As a sharp-as-a-tack Capricorn, Daria's dry sense of humor and nihilistic ways will ring your bell and make you giggle all at once. Stream Daria for free on Hulu.

Aquarius: 'That's So Raven' (Disney Plus)

Everyone's favorite clairvoyant teenager, Raven, serves us the hilariously funny and silly energy we need right now — and you, Aquarius, will especially benefit from the series' lighthearted laughs. Plus, Raven is an early aughts fashion icon with totally unique style, which will ring your originality bell. Stream That's So Raven for free on Disney Plus.

Tears? Check. Laughs? Check. Ridiculously '90s hair, makeup, and wardrobe stylings? Also check. This tearjerker of a coming-of-age '90s teen drama is exactly the nostalgic pacifier that every emotional Pisces needs right about now, so dive in and relish in every dramatic moment. Stream Dawson's Creek for free on Hulu.

More like this
Andie From 'How To Lose A Guy In 10 Days' Is A Total Gemini
By Nina Kahn
These 4 Zodiac Signs Make The Best Bridesmaids
By Nina Kahn
These 3 Zodiac Signs Could Write A Bestselling Novel
By Brittany Beringer
Here's Why Fixed Zodiac Signs Can Struggle During New Moons
By Brittany Beringer
Get Even More From Bustle — Sign Up For The Newsletter
From hair trends to relationship advice, our daily newsletter has everything you need to sound like a person who’s on TikTok, even if you aren’t.