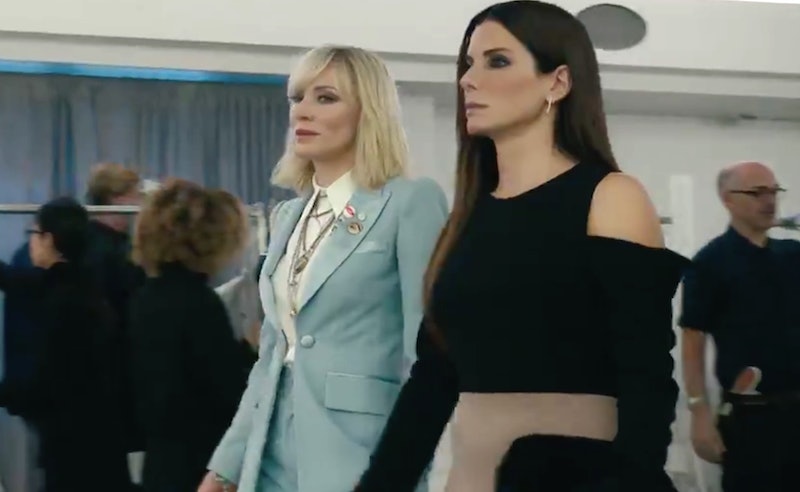 If you've ever wondered why movies release teasers before the full trailer, the Oceans 8 teaser trailer is here to inform you. It's because sometimes a movie is too jam-packed with stars and action, and a baby step is all you can handle. The teaser dropped on Monday, via the movie's Twitter account, and it will already have your heart racing as much as the full version. That isn't promised until Tuesday, but the 15-second version is more than enough for now. After all, we're working with a cast that is not only star-studded and female-powered, but also award-winning.

Maybe you haven't been paying attention, but this action movie is jam-packed with not one, not two, but four Oscar winners. And three of them are women, because that's how this movie rolls. We've got Cate Blanchett, Sandra Bullock, Anne Hathaway, and Matt Damon all rocking that Academy Award swag, and that's without even cracking the first half of the eponymous eight. Right off in the wings is Rihanna with her arms full of Grammys, and Mindy Kaling with a whole slew of Emmy nominations. Turn your back on this film for one second, and it's gonna EGOT.

So, honestly, you should be thanking the kind people at Warner Bros. Pictures for teasing us instead of bringing our workday to a screeching halt with a full-on trailer. Talk about a blindside.

In fact, only two actors who speak during the entire teaser, and it'll still leave you in nose-to-toes goosebumps. "Why do you need to do this?," Blanchett says to Bullock at the beginning of the clip, in what looks like a diner. And then the footage whirls into a montage that includes all eight of the main characters — Lou, Rose, Daphne Kluger, Nine Ball, Tammy, Amita, and Constance — backed by a rendition of Nancy Sinatra's catchy hit "Boots."

We see Rihanna clacking a pair of tongs, Bonham-Carter's eyes widening as she takes in an elaborate diamond necklace; Blanchett and Bullock counting large stacks of money in what might be a hotel room; Sarah Paulson peering between shelved boxes; Mindy Kaling with that same necklace in some sort of workshop; Awkwafina gesturing to her right; Hathaway slapping some dude; Bullock sipping a martini; and a whole collection of other images that flew by too quickly to glean much meaning out of them without seeing the full trailer.

At the very end, it was bookended by another shot from that same diner from 15 seconds earlier, and Bullock responding, "'Cause that's what I'm good at." Presumably, as the estranged sister of Danny Ocean, Bullock's Debbie Ocean is talking about being good at heists. (Seems like the kind of thing that would run in the family.) But it's also very fair to say that she and the rest of the cast are good at teasing us.

This is the shining example of teaser trailers, the clip that should go next to the definition of the term in the dictionary. It has both far more than we can take in, and far less than we need, leaving the entire audience hungry for more. It gives a glimpse of each character, reminding everyone just exactly how much we have to look forward to at the June 18, 2018 release. (As if you could forget.) It gives a hint at the storyline — the diamond necklace is likely to be important, since it appeared multiple times, with multiple characters — but doesn't give anything away.

There's so much to be excited about when it comes to this film that a full trailer would almost have been too much. You would've been shellshocked, picking up the pieces all day. But this teaser was the perfect dose of anticipation to prime fans for Tuesday.