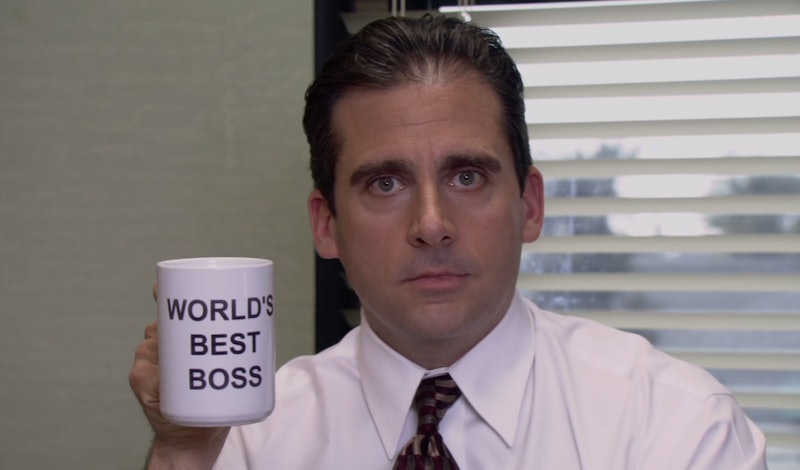 After the ball drops, Michael Scott will leave you satisfied and smiling. Obviously, that's what she said, but also what NBC said in a new press release. Fans will be able to ring in New Year's Day 2019 with an Office marathon courtesy of Cozi TV. The network is spending the first day of the new year airing every single episode of Seasons 1 and 2.

This is Cozi TV's way of celebrating the fact that they'll be playing The Office every day in this upcoming new year. — and for free since the NBC-owned broadcast network is "available in more than 90 percent of the country via antenna," according to Vulture.

It's a real godsend for all those stealing someone else's Netflix log-in just to see Jim and Pam's will-they-or-won't-they. Though, Friends is still streaming on Netflix and will continue to be throughout 2019, which might make that theft well worth it. But just like beets, bears, and Battlestar Galactica, this Office marathon is just another thing Dwight would probably love.

This two-season fun run, which you should not carb-load up for by eating fettuccine alfredo, begins at 10 am EST on January 1. It'll start at the very beginning so fans can relive their first time meeting Michael Scott. Oh, what joyous moment that is and according to Meredith McGinn, Senior Vice President of Cozi TV and LX TV Productions, it also may be a restorative one. "If you have a raucous New Year’s Eve — The Office is a great way to spend a quiet day recuperating!" McGinn said in a statement announcing the marathon.

If your new year's was just way too raucous, don't worry, the following day The Office will start airing at its regular nightly time slot, 10 pm EST. Just like Lay's, Cozi TV bets you can't watch just one episode of The Office, which is why they'll air a two-hour block of the show every night of the week. It'll be shown alongside re-reruns of other favorites like Frasier and Will & Grace because as its name implies, Cozi TV is like a warm blanket that anxious channel surfers can wrap themselves in.

Another bit of news that will make you feel all warm and fuzzy? The recent Office reunion that had all your favorites like Jenna Fischer, Rainn Wilson, and Angela Kinsey, a.k.a. Angela, getting together. It looked like so much fun that Steve Carell even responded to The Office reunion photo by tweeting "Miss you guys."

Being that fans still can't enough of the show, which aired it final episode over five years ago, it's no surprise that there's been talk of an Office revival that could include some familiar faces.

Some fans even wondered if this photo was a sign that yes, the Dunder Mifflin gang was heading back to Scranton. This time with a new regional manager since Carell has already said he wouldn't return for another season of The Office.

“I’ve never thought of it as a good idea,” he said of the possibility of a reboot in an interview with Time. “I think it existed in that time and with those people and it felt right. There was something so special about it, and I guess it’s an odd way to put it, but I love it too much to ever want to do it again."

Carell's right, The Office is a special show and while he might not want to experience it again, it's clear fans do. Now thanks to Cozi TV they'll have another way to do just that.

More like this
How The Thanksgiving Episode Of 'Gossip Girl' Changed Pop Culture History
By Gabrielle Bondi
Courteney Cox Recreated An Iconic 'Friends' Scene To Surprise Fans
By El Hunt
The 'Kenan & Kel' Reunion On 'SNL' Took A Dramatic Turn, Thanks To Keke Palmer
By Brad Witter
The First Trailer For 'That '90s Show' Includes So Many Nods To The Original Series
By Jack Irvin, Alyssa Lapid and Grace Wehniainen
Get Even More From Bustle — Sign Up For The Newsletter