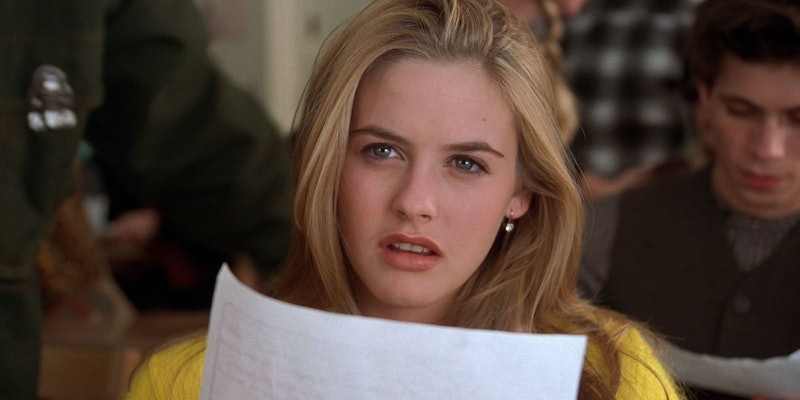 It's that time again. The time in which the month changes, the weather changes, and, inevitably, the list of what's available on Netflix changes. For some of us, that last one's a real bummer, especially if it's been a busy month and we haven't had time to sit down and chip away at our ever-expanding Netflix queue. But, I'm going to level with you here. There's really only one movie you need to watch before it leaves Netflix in February. A movie that, if you're like me and most others who had a pulse in the '90s, was mandatory viewing. That movie is Clueless. Duh.

OK, so you’re probably going, “Is this like a Noxzema commercial or what?” No, it's not. It's the seminal 1995 flick loosely based on Jane Austen's Emma, starring Alicia Silverstone, Stacey Dash, Brittany Murphy, and Paul Rudd. It's the classic coming of age comedy that taught you the Statue of Liberty actually does not say R.S.V.P., and that 'tis a far, far better thing doing stuff for other people. The former might not have guided you in life quite frankly at all, but the latter is an invaluable lesson and should not be overlooked.

In fact, Clueless as a '90s masterpiece should not be overlooked — if for nothing else, at least for Paul Rudd and his inability to age.

If you lived in some place that didn't have access to VHS tapes, then it's possible — unlikely, but possible — that you might have missed Clueless. So, this is the point in time where I sell it to you. (If Paul Rudd hasn't already.)

Cher Horowitz lives in Beverly Hills, and, at first glance, she appears to be a spoiled, rich teen with a penchant for plaid and nothing more. Until you get a bit deeper and realize that, underneath that facade, lies a pure heart and a strong moral compass. In an effort to improve her grades — and therefore please her widowed father — Cher and her best friend Dionne play matchmaker with two teachers.

After she reaps the rewards of that success, Cher takes a transfer student, Tai, under her wing and shows her the ropes of Beverly Hills life. As in, she gives her a makeover and "Supermodel" plays in the background. After some ups and downs, and a fight wherein Tai calls Cher "a virgin who can't drive" (way harsh, Tai), Cher goes through her own kind of makeover. You know, a spiritual one that ends up leading her to the Baldwin of her dreams. (That's Cher speak for "boyfriend of her dreams," by the way.)

Amongst an abundance of quotable classic lines such as the ever noted "As if!' and "Oh my god, I'm totally buggin'" and even the more obscure "Should I leave a note?" Clueless is the gift that keeps on giving. More than 20 years later, the feminist undertones, the fashion, Cher's glorious hair, all of it still holds up.

You have until the 28 of February to give it a watch and relive 1995 as if your white Calvin Klein dress depends on it. Now go forth.