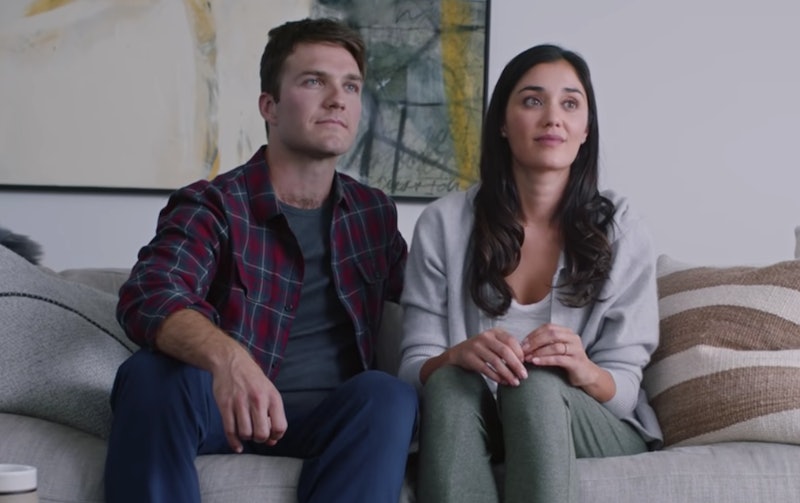 Despite the massive amounts of controversy, apparently the Peloton bike really is the gift that gives back. Believe it or not, but the Peloton husband gave one of the coveted bikes to his actual girlfriend for Christmas. Canadian actor and elementary school teacher, Sean Hunter, posted a photo of his girlfriend sitting on the $2,245 stationary bike on Instagram on Dec. 25 and captioned it, "Here’s hoping this goes over better the second time.... Merry Christmas to my actual girlfriend (pls don’t leave me)."

For those who need a refresher, Hunter and Monica Ruiz starred in a holiday commercial for the Peloton bike, which sparked massive backlash. The ad, titled "The Gift That Gives Back," showed Hunter's character giving his wife, played by Ruiz, a bike as a Christmas gift. After using it for an entire year, Ruiz's character gives her husband a thank you video montage of herself using the bike. "A year ago I didn't realize how much this would change me. Thank you," she tells him. Many viewers deemed the commercial "sexist," "cringeworthy," and "creepy," all while pointing out undertones of elitism in the commercial. There were others who defended the ad, including Peloton itself.

The actor at the center of the controversy, Hunter, didn't understand the criticism. On Dec. 5, he wrote for Psychology Today, "I pride myself on being a great teacher and developing actor, and I can only hope that this affects neither. I'm grappling with the negative opinions as none of them have been constructively helpful." As for the ad being "sexist," Hunter told People that it's "just a narrative I don’t see."

And he continues to stand by his words, as he told Newsweek about gifting the bike to his real-life girlfriend, "My girlfriend was mentioning through the whole controversy how happy she would be to receive one, so there was my answer right there!" He added, "I totally expect a few jokes from the public, and that's absolutely OK! I'm curious to know how people will react, but looking at the comments on the post so far, it's been extremely positive."

Overall, Hunter's gift for his girlfriend is receiving praise. Twitter user @izzynski tweeted, "Lol I love that they have a sense of humor about the whole thing." Meanwhile, Instagram user cabreradoug commented on Hunter's post, "Too funny, good burn on All the haters hahaha great gift BTW, Merry Christmas."

As for Ruiz, she spoke with Today on Dec. 12 and assured everyone that she is fine and isn't as "scared" as her character appears in the commercial. She even went on to star in a sort of companion ad for Ryan Reynolds' Aviation Gin, which essentially made fun of her Peloton commercial.

It's unclear if the bike given to Hunter's girlfriend was a sponsored present or if he paid for the piece of exercise equipment himself. Whatever the case, it seems like he did a good job in the gift department this year.