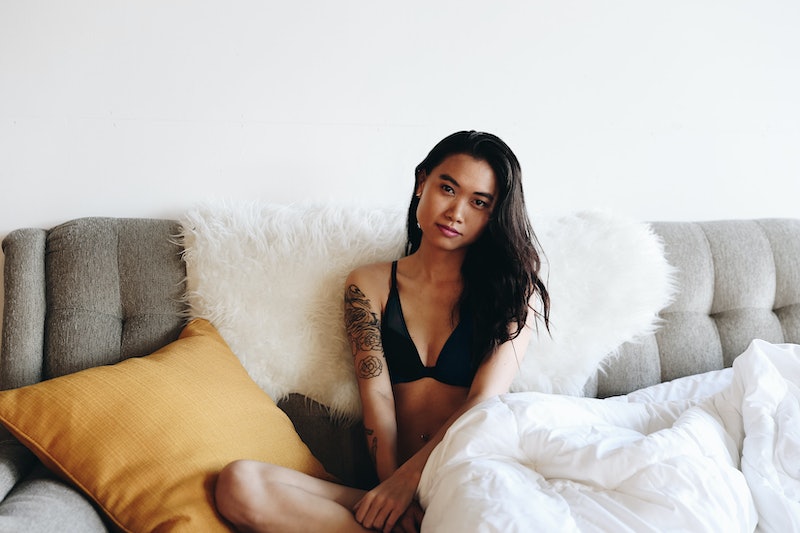 Pretty much everyone with boobs knows what a pain it can be to shop for bras. And if you fall on either end of the spectrum (small boobs or big boobs), it can be even more difficult to find a bra that fits. I'm sympathetic to anyone who has a hard time finding bras in typical stores. That's why I was so intrigued to hear about Pepper, a new bra company that's specifically targeting people who are smaller chested.

Jaclyn Fu and Lia Winograd founded Pepper because Fu noticed a gap in the market for bras that didn't gap (no pun intended). She found that any bras she brought from department and specialty stores weren't really designed for smaller chests and was sick of heavy padding and push-up bras. So she teamed up with Winograd to develop a new type of bra, one that was designed specifically with small boobs in mind.

Fu and Winograd are debuting the bra on Kickstarter, where they're attempting to raise $10,000 in seed money to fund their venture. During the first three days of the campaign, which launches Wednesday, you can pledge $37 and receive the Pepper bra at that discounted price (it'll retail for $40 thereafter). Here's where you can get the bra on Kickstarter.

The bra is super cute, right? I love the mesh details on the straps, which helps prevent the dreaded gapping you can see below.

The difference is pretty dramatic, right? You can see how the Pepper bra is really designed to fit smaller chests.

The bra will come in two colors, beige and black. It'll be available in sizes 32AA to 38B. It'll retail for $40 after the company officially launches in April. Keep folowing the Pepper website and Instagram for updates about when the bra's will ship.