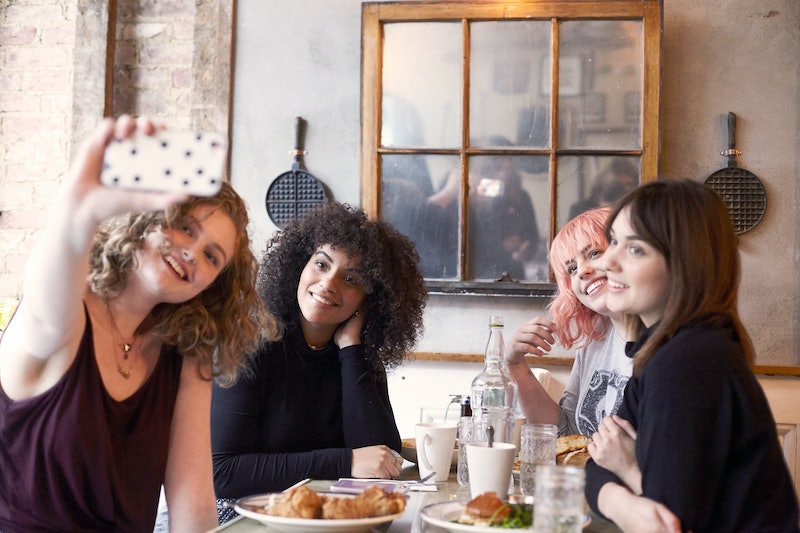 It's hard to remember a time before the selfie. Thanks to front-facing cameras and the rise of social media, selfies populate our camera rolls, Instagram feeds, dating profiles, and vocabularies. There are phone cases designed to give you photoshoot-worthy lighting, a book of Kim Kardashian's selfies you can pay cash money for, and the word "selfie" is even recognized in the Oxford dictionary (it earned the coveted "word of the year" title in 2013). The selfie "boom" may be behind us (remember when selfie sticks first hit stores?), but it was never destined to be just a passing trend — these quickie self portraits have turned into a permanent fixture of our culture.

And like most ubiquitous phenomenons, we've turned to psychology and science to explain our ongoing love of the selfie. Over the past several years, researchers have explored the drivers behind modern-day self portraits, and their findings don't always seem rosy.

One study from SUNY University at Buffalo examined the relationship between self-worth and social media use, finding that people who base their self-worth on others' opinions are more likely to post self-portraits. "It may be the case that people who base their [self-esteem] on appearance do not necessarily believe that they are capable of competing socially in this domain," the study states. "Clearly, one can be dissatisfied with one’s appearance, yet still believe that appearance is an important component of one’s self-worth."

Other research points to narcissism as a predictor of how likely individuals are to post selfies. Although it's not the first research to identify this, a 2016 study published in the journal Computers in Human Behavior found that "narcissism significantly predicts individuals' intention to post selfies on social networking sites." They assessed 85 study participants with the 13-item narcissism personality inventory, and found that those who were higher in narcissism were more likely to selfie it up.

"Fundamentally, we're still stuck in thinking that people who promote themselves are narcissists," Pamela Rutledge, Ph.D., director of the Media Psychology Research Center, tells Bustle. However, along with other psychologists and researchers, she isn't convinced that taking and posting selfies is a reflection of self-centeredness, as some studies might suggest.

She also notes that narcissism may have a negative connotation these days, but it's not necessarily a "bad" trait — it's actually a characteristic that's been tied to extraversion in the popular Big Five personality assessment tool. Narcissism remains a debated and studied topic among social psychologists (much like selfies themselves), and Rutledge doesn't buy it that narcissism is a no-good trait that reflects character. "The humanist movement introduced the concept of healthy narcissism, recognizing that some amount of self-love or self-esteem and a realistic appraisal of and appreciation for one’s qualities is necessary for healthy development," she explains. Narcissism also isn't an all-or-nothing trait — there are different degrees of it, and we're not talking about pathological narcissism here (which has diagnostic criteria).

Even though self-portraits have been around for ages, the modern re-invention of the selfie is relatively new, so we're often just not sure how to feel about them or how to label them, she explains — and it's easy to jump to a negative conclusion.

There's more nuance in why we take and post selfies than studies account for, and selfies are a part of the human experience in a digital age. Here are some of the reasons we take selfies — and most of them have nothing to do with being full of ourselves.

During a National Portrait Gallery panel discussion on selfies, the BBC reported that University College London neuroscientist James Kilner explained, "we are able to take and retake pictures of ourselves until we can produce an image that comes closer to matching our perception of what we think we look like." Sound familiar?

There's no doubt that face-to-face communication has had to make room for screen-to-screen communication. Whether we realize it or not, posting our own selfies and seeing others' is a way of connecting with others via technology. And even if there's no direct talking going on in the comments section or a Snapchat message, it's still an extremely effective means of communication.

"The amount of information that goes to someone in an image is significantly more than can go to someone in text," says Rutledge. So while we're all after that strong caption game, the image still takes the lead. Rutledge says we also tend to prefer photos with people actually in them, subconsciously or not. With front-facing cameras, there's no need to ask a stranger to take a photo when we have the ability there for ourselves.

When we post selfies, we're also able to control the image we're communicating to the world — for every selfie someone posts, they might have 27 other options stored on their phone. And while it's important to keep in mind that people's selfies aren't necessarily what they look like all the time, curation isn't inherently bad. "You're making conscious decisions about self-representation. And why is [someone else] posting a good photo such a moral dilemma? Because people aren't used to that level of control," says Rutledge.

Not all selfies are the same, and people use them to communicate different things in different ways. In a recent study, researchers from Brigham Young University identified three main "types" of selfie-ers: communicators, autobiographers, and self-publicists.

According to the study, communicators use selfies to engage with their followers and stimulate discussion, so the goal is two-way communication. Autobiographers are focused on documenting and sharing significant moments and events that are important to them. They want to share, but are less concerned with actual feedback. The smallest group was self-publicists, who use selfies to document pretty much their entire life, from a trip to Europe to a trip to the DMV.

Despite the curious reasons and motivations we have for posting selfies ourselves, we're often quick to judge others' selfies in a negative light. "People have a double standard," says Rutledge. "[People think,] 'it's not OK when other people take selfies, but it's OK when I do it. Because I'm doing it in a healthy way, but somebody else is probably a narcissist.'" She also adds that women tend to view other women's selfies more harshly than men.

In particular, it can be a gut reaction to label people who fall under the self-publicist category as being "full of themselves," but this is a little misguided. "We have this cultural perspective that it's not OK to self-promote, and now people have the ability to very easily take a picture," says Rutledge. Self-promotion is no longer reserved for the rich and famous or real estate agents on bus stop benches, she says.

This perception goes beyond photos, though. From a broader perspective, women are told to be confident and lift themselves up at work and at home, but when we do, it can be viewed as abrasive or selfish. Unfortunately, this can translate over to social media. So if you do find yourself getting a little judgmental of self-publicists — guilty over here sometimes — it's worth thinking about why your instinct is to feel that way.

No matter what kinds of selfies you post, it can be a chance for social validation, which is not a bad thing in and of itself, says Rutledge. "This idea that we should feel guilty about wanting social validation is just crazy. It's hardwired in our brain," she says. The key is not letting our inherent desire for likes and followers get out of hand. Check in every once in a while and make sure you're not basing your mood or self-worth on likes — if you suspect your selfie use might be getting out of hand, Rutledge suggests keeping a journal and writing down what you post and how it makes you feel.

So go forth and selfie with your newly enlightened perspective — and make sure you keep it in mind when you view other peoples' self-portraits, too.