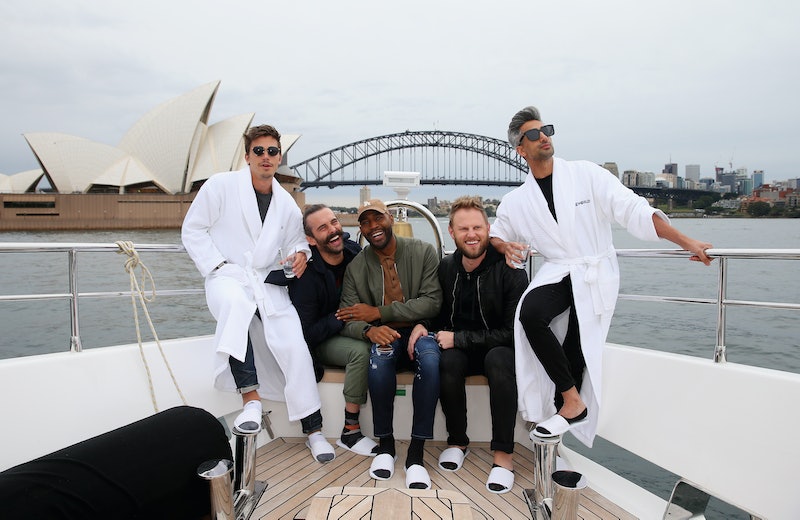 What better way to celebrate a major accomplishment with your fans than with an epically choreographed dance number? Well, that's exactly what the Queer Eye stars did after finding out about the show's Emmy nominations, Thursday, July 12. Posted to Tan France's Instagram page, Tan and Jonathan Van Ness's #InMyFeelingsChallenge video is the best thing you'll probably see on the internet all day.

The Queer Eye frontmen aren't the first celebs to take a stab at performing their own rendition of the ever-so popular #InMyFeelingsChallenge, of course. But, they totally completely nailed it. The challenge, which was started by Instagram star Shiggy on June 29, bears the same name as Drake's track "In My Feelings" off of his 2018 studio album Scorpion. And as if the multi-platinum performer wasn't bound to takeover the summer with his melodic hits already, the catchiness of the dance track totally helped to push the album's success over the edge. Which is even more of a reason for the stars of Queer Eye to mesh their accomplishments with that of another successful giant, right?

The 2018 Netflix reboot of Queer Eye for the Straight Guy received four Emmy nominations on July 12, for Outstanding Cinematography For A Reality Program, Outstanding Picture Editing For A Structured Or Competition Reality Program, Best Structured Reality Show, and Outstanding Casting In A Reality Program. And as you may have already guessed, fans of the show also can't help to rejoice, either. Since its release, Netflix's Queer Eye has shared stories of love, courage and strength with the world. And as a bonus, veiwers have also had the opportunity to watch some pretty epic love stories evolve before their very eyes — like, the wonderfully rekindling of Tom and Abby's romance, and the recent engagement of AJ and Drey, both from Season 1.

The impact Queer Eye has had on its audience is seriously unmatched, and Tan and Jonathon gifting fans with their epic version of the #InMyFeelingsChallenge is just the icing on the cake.

Captioning the July 12 post, Tan wrote, "4 EMMY NOMINATIONS? THIS IS HOW WE CELEBRATE. @jvn #InMyFeelingsChallenge [.] Thanks for the moves @Ciara." Because, yes — when tackling her own version of the dance craze, Ciara totally killed it too.

Just as Ciara, so many other celebrities have, whether unbeknownst to them or not, entered a healthy competition as to who will deliver the best #InMyFeelingsChallenge video? Everyone from Kevin Hart, to Odell Beckam Jr., and even Drake himself posted some pretty cool renditions to the internet. But the best one of them all has got to be Will Smith, as his routine on top of a Budapest bridge, seriously, cannot be topped.

That's not to say that Jonathan and Tan's version isn't in the fan's favorites, however. Because, the talented duo's attempt is attached to something amazing — champagne-worthy, even. The show they've worked so hard on is slated to potentially bring home some Emmy gold at the close of the summer, and if that doesn't call for an all-out dance battle, what does?

Along with Tan and Jonathan, their fellow Queer Eye stars Antoni Porowski, Karamo Brown, and Bobby Berk also took to the internet to express their gratitude for the show's Emmy nods — including sharing heartfelt tweets, and a very emotional video of Jonathan's in-the-moment reaction.

Those obsessed with Queer Eye can agree — the Fab Five definitely deserve all of the great things coming their way. Over the past few months, the lifestyle experts have poured their hearts into transforming the lives of their subjects for the better, and in turn, have changed the lives of some tuning in from home, too.