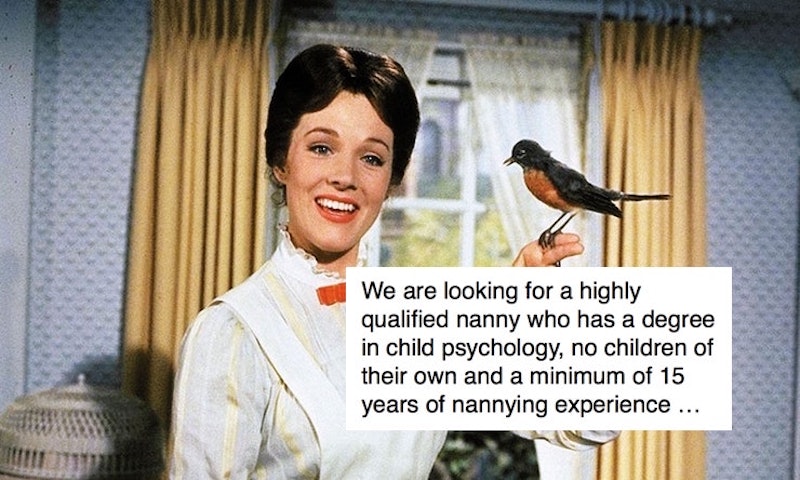 I have the greatest respect for nannies. As someone who isn’t that great with kids, I am constantly in awe of those who can — and willingly — entertain wee ones for hours on end. However, I’m not sure even the best nannies I know would be suited for this now-viral nanny job, because the listing for it features requirements that I wouldn’t expect actual superheroes to have, let alone mere mortals. I’ll be honest: Between this job and the ghost nanny job, I would take the ghost nanny job, no question. At least I feel somewhat prepared for that one, thanks to every book and story I’ve ever read about nannies nannying in haunted houses.

Like the ghost nanny job, this one was originally posted to Childcare.co.uk, a site that connects nannies in search of employment with families in need of nannying services. This particular family has six members; the four kids are ages 2, 5, 7, and 15 (so, we’re looking at a pretty big range of ages here). This, in and of itself, isn’t unusual — but it starts to get real… uh… unique, real fast. The family, you see, splits their time between four different places — they have homes in London, Barbados, Cape Town, and Atlanta — and appears to be quite well off; they’re offering £100,000, or around $128,000, per year.

The list of requirements for qualified candidates, though? That’s another story.

What they’re essentially looking for is what Rebecca Reid at The Telegraph calls a “supernanny.” Writes Reid, “The super-rich want high-flying supernannies; think MSc from Oxbridge, the ability to ski, horse ride, and successfully coach little Amelia or Otto ahead of school entrance exams.” She points to an advertisement posted by Gwyneth Paltrow in 2011 as a real-life example: As Reid writes, Paltrow asked for candidates to “possess a classical education, be fluent in at least three languages, play two instruments, be passionate about sailing and tennis, and enjoy art history or martial arts.”

And that, it seems, is what this particular family seems to be looking for in their potential new live-in nanny. Here are the things successful candidates will have, according to the Childcare.co.uk listing: