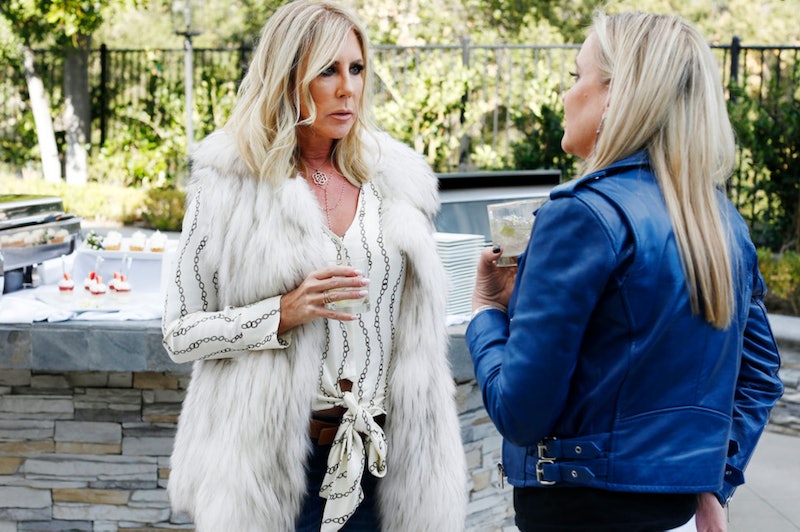 On July 2, 2019, Bravo revealed Vicki Gunvalson is no longer a member of The Real Housewives of Orange County’s main roster. It was a stunning change, and another change may be on the horizon. On a recent Jerry O' episode, some current RHOC stars hinted that Vicki might return to the series' full-time lineup. And it could happen soon.

When Shannon Beador, Tamra Judge, and Vicki (aka the Tres Amigas of RHOC) appeared on the Tuesday, Aug. 13 episode of Jerry O'Connell's talk show, they made it clear that the OG of the OC will not be moving on from the series anytime soon. Vicki not only plays a relatively significant role in the current season, but Tamra insisted that "she'll be back next year." *Falls out of chair.* *Log rolls out the front door.* *Log rolls all the way to Orange County.*

No, Tamra did not explicitly say that she believes Vicki will be back on the main roster if and when RHOC Season 15 happens, but it is difficult to ignore the optimism dripping from her voice.

So, there you have it. With or without her orange, Vicki plans on sticking around. When O’Connell asked her about her new role on RHOC, the Empress of Whooping It Up assured the talk show host that she is not going anywhere. She explained,

"I talked to [Andy Cohen] last night, because I said, ‘What do I say?' He said, "You know what, nobody has ever lasted 14 years on a reality show, be happy and proud of that.' And I'm still in. Our producer Scott Dunlap said, ‘Unless they kick you off the horse, don't voluntarily get off the horse.' So, I'm still on the horse. I'm still riding the pony! I don't know what my future is, but I'm having fun and they're my friends."

They took her orange, but they haven't taken her horse.

After 13 seasons, Bravo asked original Real Housewife Victoria Gunvalson to turn in her orange and take a spot in the supporting cast. When that news broke, it became clear no Real Housewife was safe. Viewers were caught off guard, Vicki was caught off guard, and Vicki's costars were caught off guard. As Tamra recently told People, “I was totally shocked [by Vicki’s demotion]. So, I’m still a little bit shocked. And she’s the major drama in this season, which is so weird. She is the one stirring everything up.”

The season's only two episodes in, but the Kelly Dodd vs. Vicki feud already looms large, and it sounds like it only gains steam as the season chugs along. Moreover, it sounds like Vicki was around, like, a lot. When speaking with TooFab earlier this month, Shannon said, “Vicki might not be holding an orange, but she is an integral part of the show, and she always will be. Most of the time when I was filming in a group setting, I was with her, so she is present in the show, and she always will be."

One would assume that the OG of the OC's seniority, close friendships with two of the main RHOC cast members, recent engagement, and Season 14 pot-stirring would keep that orange in her hand. Evidently, that is not the case. But as Andy Cohen says every time he's asked about a former Housewife potentially returning to a cast, never say never. Woo-hoo.