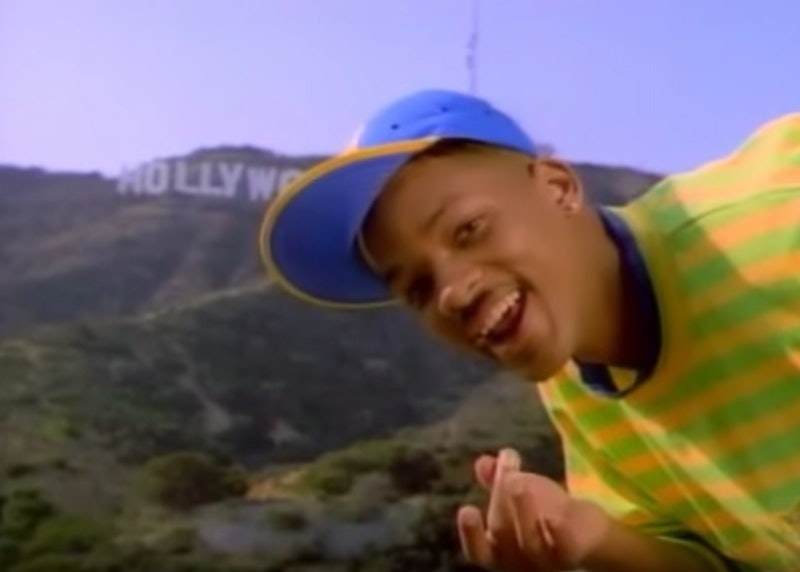 It could be time for a new character from West Philadelphia — born and raised — to have their life flipped turned upside down. That's right, the rumored Fresh Prince of Bel-Air reboot might be in the works, but according to TMZ, this time it might be a Fresh Princess who moves to California. This news comes just a couple of months after Will Smith said he would play Uncle Phil in a reboot while appearing on the BBC's Graham Norton Show. While Smith's statement doesn't reveal anything other than the actor's willingness to participate in a reboot, TMZ has compelling evidence that The Fresh Princess of Bel-Air could happen in the near future.

According to the popular celebrity gossip site, the clues that a Fresh Prince reboot didn't exactly come from a casting call but rather a trademark application. TMZ stated that the company which owns the rights to Fresh Prince recently filed numerous applications to obtain the rights to the title, "Fresh Princess." The gossip site also reported that the name "Fresh Princess" will be trademarked both for TV and other media platforms, which could mean that the show would come out via a streaming network. Of course, that is if there is a show, which hopefully there is, at least eventually.

While digging through the copyright files, TMZ also learned that "Fresh Princess" is being trademarked for clothing, footwear, and a wide range of merchandise like bags and pet collars. The fact that the company has only trademarked the name doesn't mean too much at this point, but it could mean that a female-centered Fresh Prince might happen sooner than later. Even without a show to back it up, a backpack that says "Fresh Princess" would probably still sell out.

As mentioned before, the original star of Fresh Prince, Smith, has shown his support for some kind of reboot of the 90s show. When a cartoonist named Howard Russell drew the cast of Fresh Prince on Instagram, Smith commented on the photo giving his approval. According to TMZ, Smith wrote, "Now THIS is what's up!" He continued, saying, "Never thought about FP in terms of animation."

Seeing as Smith acknowledged that Fresh Prince wouldn't be the same with an older Will, the actor might approve of an animated version in which he could still play the Fresh Prince. While appearing on Graham Norton Show, Smith jokingly imitated how silly it would be for him to play the same character now. "Like, ‘C’mon, Aunt Viv! I’m 50. I can’t go out on my own?'" The actor mocked. So sure, Smith is too old to play the young protagonist of a Fresh Prince reboot, but that doesn't mean a woman can't take over the role.

Will Smith's son, Jaden, has made it clear that he has no intention of becoming the new Fresh Prince — the young actor said "Just leave that alone," when asked by Extra TV in 2016 — perhaps this means it's Willow Smith's time to take over the throne.

With Willow's awesome music career and her impeccable sense of style, it's easy to imagine her rocking the next generation of Fresh Prince. A reboot of the show would offer a great opportunity for even more emotional breakthroughs and female empowerment that the original show included. In times like these, a Fresh Princess might be the perfect addition to the awesome current TV shows, Grown-ish and Insecure, which both explore what it means to be a Black woman in the U.S. now.

Imagine how great the addition of a Fresh Princess of Bel-Air could be, as it would confront identity politics and class divides. Of course, it would also have to include a lot of hilarious and memorable moments, complete with Will Smith's silliness and Aunt Viv's loving but stern guidance. Hopefully it happens soon, because that sounds pretty perfect.