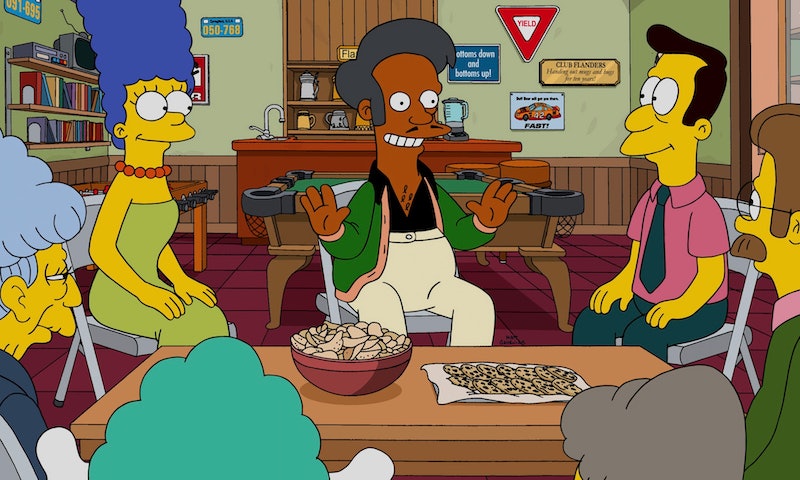 If you're a fan of the series, you've likely followed this controversy for a while, but it seems that it's coming to a head: according to reports, The Simpsons will drop Apu from the show. And this decision is leaving some critics more perplexed than satisfied. Bustle reached out to representatives of The Simpsons at FOX for a comment on Shankar's allegation, and received this response: "Apu appeared in the 10/14/18 episode 'My Way or the Highway to Heaven.'"

The Kwik-E-Mart owner has been a fixture on the long-running series since the beginning, but many have taken issue with the fact that the Indian character is voiced by a Caucasian actor — Hank Azaria — who puts on a lilting, stereotypical accent for the role. The conversation about the appropriateness of the character has gone on for years in some circles, but it reached the public sphere with comedian Hari Kondabolu’s 2017 documentary The Problem with Apu.

That project was received with critical acclaim and appreciation by many fans, but met with public derision in The Simpsons camp. The series aired an episode called "No Good Read Goes Unpunished" that ridiculed critics for their complaints about the show's political-correctness, or lack thereof, and then largely ignored the issue.

In May of this year, writer Matt Reiss told Vanity Fair that the Apu issue had been dealt with, adding that the character has “barely had a line in the past three seasons." (Azaria, it should be noted, has previously stated that he would be happy to never voice Apu again.) But even critics of how the show depicted the character aren't happy with this alleged solution.

Indian-American producer Adi Shankar, who does not work for The Simpsons, spoke with IndieWire about the rumors he's heard about Apu's fate, and shared his disappointment at a move that he claims is based on "cowardice." "It’s not a step forward or step backwards," he told the outlet. "It’s just a massive step sideways."

The producer told IndieWire that he has multiple sources claiming that Apu is set to be erased altogether. No write-off, no explanation, no addressing of public concerns. Just erasure. According to Shankar's sources — two of whom reportedly work on The Simpsons, and another who allegedly works directly with its creator, Matt Groening — The Simpsons will simply cease to write Apu into any new episodes. In fact, Shankar claimed, they may have already.

Shankar claimed that he reached out to the show because he had a script that he felt solved the "Apu Problem," as it's been termed, but that he received a disappointing response. As the producer told the outlet:

"I got some disheartening news back, that I’ve verified from multiple sources now: They’re going to drop the Apu character altogether. They aren’t going to make a big deal out of it, or anything like that, but they’ll drop him altogether just to avoid the controversy."

As noted above, neither The Simpsons nor the FOX network has really made a definitive statement regarding Apu's fate other than noting his appearance in a recent Oct. 14 episode. But while it's true that Apu did indeed appear in "My Way or the Highway to Heaven," it's important to note that, as IndieWire reports, he was featured only in a wide shot that included many other characters, and delivered no lines. So for the moment, it's impossible to know exactly what the plan is for Apu, or if there is one. The only thing that seems clear is that unceremoniously removing the controversial character from the series ultimately satisfies no one.

The writers and producers who defended the character are, one assumes, not please to have to let Apu go. People who don't care about the issue are losing a beloved character (and expressing their anger on Twitter). And the people who are invested in how Apu developed as a character are having their hard work and ideas dismissed. And that includes Shankar. "I feel like sidestepping this issue doesn’t solve it when the whole purpose of art, I would argue, is to bring us together," he told Indiewire, continuing:

Kondabolu, who has taken the brunt of the blame for Apu's apparent disappearance form The Simpsons, tweeted that he would be disappointed to never see the character again. "There are so many ways to make Apu work without getting rid of him," he wrote. "If true, this sucks."

In the absence of better options, it's hard to scold The Simpsons writers too robustly for their alleged decision to quietly retire Apu, but it's easy to see why the writer's decision upsets critics. If they are, indeed, retiring the character instead of trying to grapple with the issue, it would be a missed opportunity. And, really, any move that leaves this many fans disappointed is certainly not ideal.