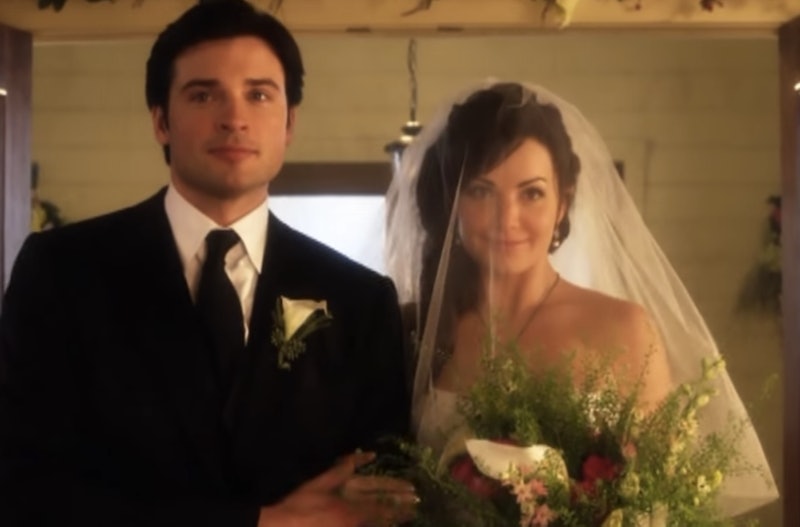 Smallville featured so many amazing 'ships that it's tricky to pick a winner. From Chloe Sullivan and Oliver Queen to Lex Luthor and Lana Lang, the Superman origin series featured some seriously memorable romances that spawned tons of fanmade videos on YouTube. But above all, Clark Kent and Lois Lane were the best Smallville 'ship, and the one that was most worth waiting for. While Lois and Clark's relationship didn't properly start until Season 9, when both started to admit they had feelings for one another, there were so many amazing moments that preceded that point.

Lois joined Smallville in Season 4, and she improved the series immensely. Clark and Lana's on-again/off-again relationship got boring very quickly, and Lois brought a totally new dynamic to the group. Lois and Clark's constant jibes and put-downs made the show more interesting, and Lois was a much-needed source of light relief. Her stamina and strength also made her the perfect comrade for Clark, which is why it was easy to start 'shipping the pair so early on. And the Smallville episode that made me 'ship Lois and Clark before they ever got together was "Crimson" (Season 6, Episode 13).

In the episode, Lois tries on a brand-new lipstick, not knowing that it's laced with red kryptonite. It instantly makes her attracted to Clark, so she pursues him in the best way. As a love connection between the pair seems so unexpected this early in the show, it's super fun to watch.

After going to the Kent Farm to find Clark, Lois asks Martha to leave them alone. Lois gives Clark a mix CD that she's made for him that's filled with Whitesnake power ballads. Then Lois tells Clark, "There's nothing I love more than slow dancing with some big strong arms around me, just like yours, Smallville." Clark is obviously surprised by this massive shift in temperament from the usually hostile Lois, but he goes along with it. While Lois goes to put the CD on, Clark disappears in his trademark blur. However, their encounter doesn't end there.

When Lois finds Clark at the Daily Planet building, she reveals that she got a tattoo that reads "Lois & Clark Forever." She tells a shocked Clark that he should get one to match. Then she pulls him into a cupboard and proceeds to kiss him. Of course, Lois's lipstick infects Clark with red kryptonite, so he goes a little wild.

They end up in the Watchtower, and Lois says, "Last time I was here, I was with a good friend of yours." Clark's reply is brilliantly snarky: "Obviously, he wasn't that good." However, before anything can happen, Clark spots an invitation to Lana and Lex's engagement party, and his jealousy kicks in.

The reason this episode made me 'ship Lois and Clark super hard is that their chemistry is undeniable. While viewers were used to seeing the pair bicker, argue, and make jokes constantly, seeing them come together physically was surprising. As the pair had to be so tactile with one another in the episode, it was clear that their physical chemistry was just as buoyant as their verbal banter. Even though Clark's relationship with Lana was still the focus in Season 6, this major hint that Lois and Clark would one day be together was completely perfect.

When their personalities go back to normal, Lois and Clark are bemused by what happened between them, but can't completely remember it. Lois is forced to admit some of her feelings for Clark might have been real. After all, Whitesnake on a mix CD equals true love, doesn't it?

"Crimson" gave fans what they dreamed of long before Lois and Clark got together for real, and I'll always love the writers of Smallville for that.