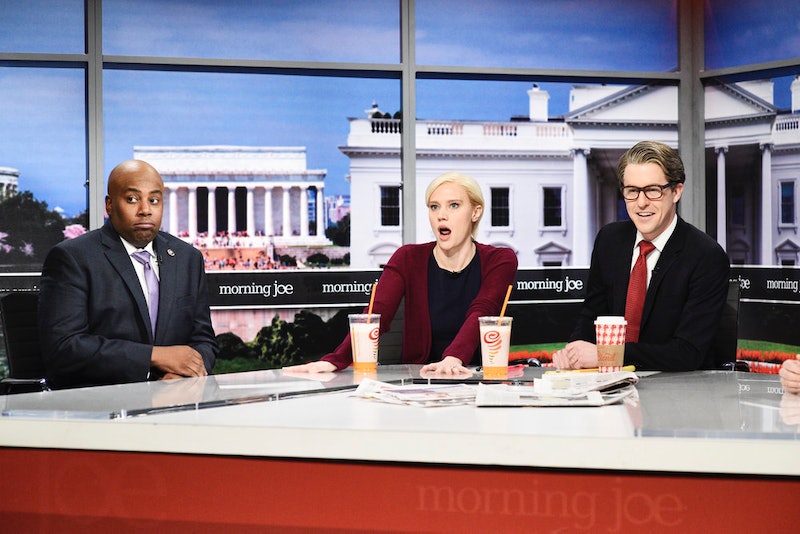 Saturday Night Live is famous for its political impressions, and now, it's added arguably 2018's biggest new name in American politics. A sketch based on the MSNBC morning talk show Morning Joe brought out cast member Melissa Villaseñor to play the youngest woman ever elected to serve in congress, Alexandria Ocasio-Cortez, to point out that compared to being a millennial, serving in the United States congress doesn't seem all that difficult. SNL's Alexandria Ocasio-Cortez impression may not have lasted long, but it likely won't be the last time that the show parodies Ocasio-Cortez to examine her unique experience as a new member of the government.

Ocasio-Cortez's star has been rising after winning her election to become the representative-elect of New York's 14th congressional district, mostly due to her experience of going from a bartender to a congresswoman, and her transparency about what it's like to be a member of Congress. She's been open about her struggles to find housing in Washington D.C., how her clothing choices have been judged by others, and has been posting regularly about introducing a Green New Deal to confront climate change. Now that she'll be beginning what could be her first of many two-year terms, Villaseñor's impression of Ocasio-Cortez will likely become as common a presence on Saturday Night Live as fellow democrats like Alex Moffat's Chuck Schumer or Cecily Strong's Diane Feinstein.

Villaseñor's Ocasio-Cortez impression begins with her saying "Look at me! I'm different!" which handily recaps Ocasio-Cortez' appeal for fans that may not be familiar with the politician. While most political impressions on SNL are exaggerated or absurd, the most interesting element of Villaseñor's take may be that everything she says sounds like something that the real Ocasio-Cortez would say. In the sketch, the fictional Ocasio-Cortez responds to claims that she overcame incredible odds to win a seat in congress by saying, "I'm a millennial so getting any full-time job is overcoming incredible odds."

The fictional Ocasio-Cortez is also not fazed by any supposed difficulty that comes with serving in Congress, saying "I worked as a bartender in a Mexican restaurant like 11 minutes ago. This job is a frickin' breeze. We get Saturday and Sunday off, I can sit down whenever I want, changing America's healthcare system is gonna be nada."

Not only is Villaseñor's impression not especially exaggerated, there's also something optimistic about the impression that is rare among the show's political impressions. While Saturday Night Live is often critical of Republican politicians, the show has also taken shots at Hillary Clinton, Barack Obama, and other democrats over the years. With Ocasio-Cortez, however, SNL doesn't mock the politician herself, instead suggesting that everyone who doubts her is ridiculous for suggesting that a millennial may not be well-equipped to serve in Congress. The segment ends with Ocasio-Cortez yelling out that when it comes to serving in Congress, she "was born for this!" and if that's true, there will be plenty of opportunities for Villaseñor's impression to return to SNL in the future.