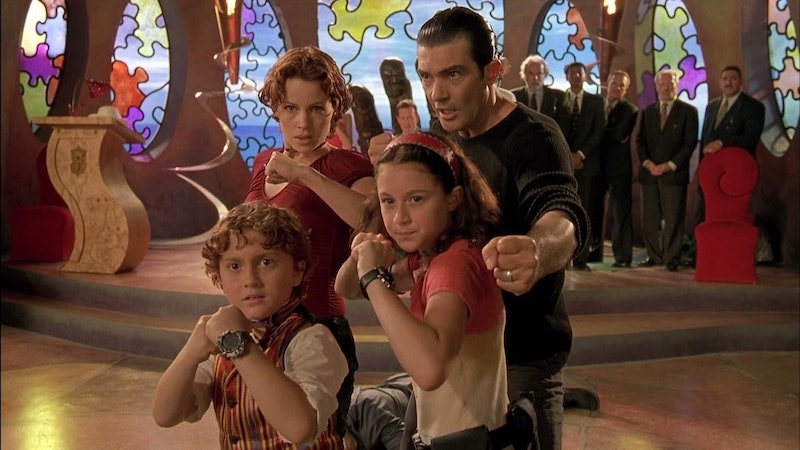 Carmen and Juni Cortez are back together again: Spy Kids’ Alexa PenaVega and Daryl Sabara reunited on pop singer Meghan Trainor’s Instagram Live on April 21. During their virtual hangout, PenaVega and Sabara reminisced about their time on the 2001 family adventure film and its subsequent sequels alongside Trainor, whom Sabara wed in 2018. In the virtual reunion amid quarantine, the two also revealed their fictional counterparts’ full names are forever seared in their memories and showcased their Spy Kids memorabilia from set.

“Do you know Daryl’s name in the movie, the full name?” PenaVega asked super-fan Trainor in a clip captured on social media, which prompted her to reply, “I know Juni Cortez. What am I missing?” When PenaVega suggested that Sabara wouldn’t recall his character’s full name, he responded, without missing a beat, “Juni Rocket Racer Rebel Cortez.” PenaVega then quickly recited her own: “Carmen Elizabeth Juanita Echo Sky Bravo Cortez.” Trainor was stunned.

In the Live, Sabara also revealed that Trainor’s parents framed his old Spy Kids costume — which had been “gathering dust” in storage — and gifted it to him. “No! You have that?” PenaVega gasped, adding that she still had some of her old outfits and set props, too.

Spy Kids followed two sibling spies who must rescue their ex-spy parents (Antonio Banderas and Carla Gugino) from an evil mastermind. The film yielded three follow-up films, Spy Kids 2: The Island of Lost Dreams, Spy Kids 3-D: Game Over, and Spy Kids: All the Time in the World. While children from the early aughts recognize the films as true classics, PenaVega said in the Live that her sons, Ocean, 3, and Kingston, 9 months, whom she shares with Big Time Rush’s Carlos PenaVega, have never seen the film. However, Ocean likes 2005’s The Adventures of Shark Boy and Lava Girl, which PenaVega called ironic since “everyone always thinks that we were in that movie."

PenaVega and Sabara’s reunion comes after a small surge in quarantine reunions with stars from the early aughts. In fact, PenaVega’s husband, Carlos, reunited with his Big Time Rush bandmates on April 20 to send a message to fans. "Guys, we are in this together," he said in the short video. "We love you guys so much. Spread that love, spread that Aloha and who knows, a lot to look forward to at the end of this.” And, in late March, Miley Cyrus reunited with Hannah Montana co-star Emily Osment on her Instagram Live series, Bright Minded, to advocate for animal welfare and reminisce about the show. We may be stuck inside, but at least the stars of the early 2000s are using this time to reconnect.