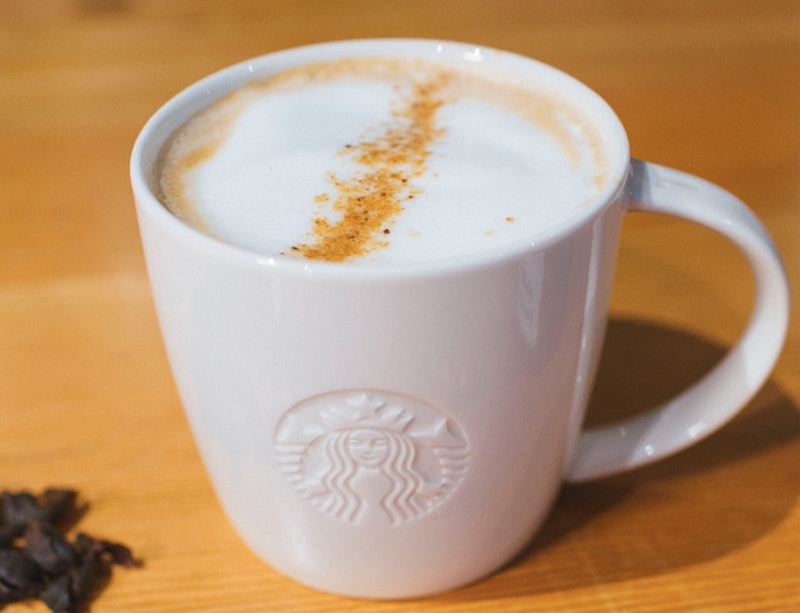 So, hey, remember when we heard about that wacky Cascara Latte thing during the Starbucks Investor Conference back in December? Well, the Starbucks Cascara Latte release date is finally here, and guess what? It’s soon. Really soon. Like, tomorrow soon for some lucky people. I guess 2017 isn’t too bad so far, right? I mean, I realize that right now, it doesn’t take much to make me happy; I’m kind of in a state where I'm constantly latching onto every tiny bit of positivity that I can and holding on for dear life. But hey. Sometimes it’s the little things, right?

What we learned back in December at the Investor Conference wasn’t much: First, that the Cascara Latte, which originated at the Starbucks Reserve Roastery in Seattle, Wash., involved the fruit of the coffee cherry (intriguing!); and second, that it would be arriving at Starbucks stores across the country sometime in January. And as it turns out, we didn’t have long to wait at all: Starting on Jan. 10, 2017 (that’s next Tuesday, for the curious), the Starbucks Cascara Latte will become available to fans of the 'Bux nationwide. What’s more, if you’re a member of Starbucks Rewards, you’ll be able to get it even sooner on Friday, Jan. 6. (If you’re not a Rewards member and you regularly go to Starbucks, now might be the time to join — it’s free and has a ton of perks, so what’s not to love?)

What exactly is cascara? Literally translated, the word means “husk” or “shell” in Spanish. It’s the fruity outer skin of the coffee cherry, which is usually thrown away once coffee growers and roasters have gotten to the bean underneath. However, according to NPR, coffee grower Aida Batlle discovered the possibilities of cascara in the early 2000s. The hibiscus-like scent of the discarded coffee husks inspired her to clean a few of them and stick them in hot water to see what the resulting drink tasted like... and it was good. Really good. Said Batlle, “I called my customers at the time, and I was like, ‘Oh, my God, you have to try this. I’m going to send you a sample.’”

That right there is what coffee cherries look like, by the way; it's only after the fruit has been discarded and the beans have been roasted that we get something like this:

Which we can then turn into this:

Starbucks’ take on cascara comes — like so many of the coffee giant’s signature drinks — in latte form. It begins not with cascara tea, but with espresso, to which Starbucks' Cascara syrup is added. The Cascara syrup combines coffee cherry extract with coconut and cane sugars; when mixed with espresso, it adds notes of dark brown sugar and maple to the drink. The espresso-Cascara syrup mixture is then combined with the milk of your choice and finished off with foam and Cascara topping, creating a drink that’s perhaps slightly lighter in flavor than many of Starbucks’ other lattes, but no less delicious. A 12-ounce Tall contains 75 mg of caffeine, and it looks like this:

The Cascara Latte is limited edition, however; it’ll only be available while supplies last, so make sure to grab it while you can. A 12-ounce Tall will set you back around $4.25 to $4.75, depending on the market.

Oh, and here’s another tidbit for you: The Smoked Butterscotch Latte — another drink which originated at the Roastery and was released for a brief and shining moment nationwide last year — will be making a return for 2017 on Jan. 6, too. I actually missed that one the first time around, so you’d better believe I’m going to be giving it a shot this time. When granted second chances, one does not squander them. One also does not look gift horses in the mouth, especially if they come bearing coffee.

Am I mixing too many metaphors? Forgive me. My love of coffee cannot be contained, and apparently it needs to express itself with as much weirdly flowery language as possible. In any event, get thee to thy local Starbucks posthaste to grab a Cascara or Smoked Butterscotch Latte of your very own. Because you deserve it.