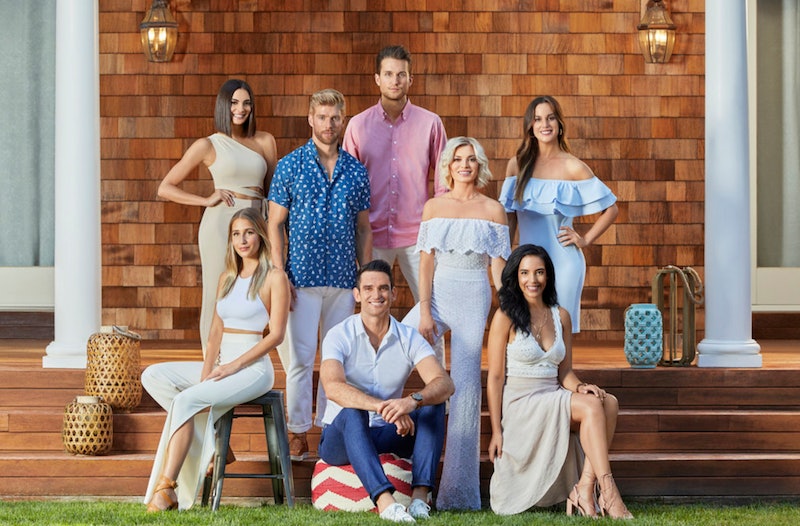 The weather outside may be frightful, but it is almost time to inflate that ol’ flamingo pool float and pour yourself a tall glass of rosé. As of March 4, your favorite bunch of weekenders will be back on the small screen. Bravo released the Summer House Season 3 trailer and the preview promises another Vanderpump Rules crossover, loads of sparkling wine-fueled mayhem, hookups, a proposal, cheating accusations, a backyard "funeral," and a few adjustments to the cast. The clip, which was first unveiled at People on Wednesday, Jan. 23, confirms who's coming back, who isn't coming back, and who is new to the crew. Ready to pop the cork on this bottle of Champagne, er, changes and find out who's going to be on the Season 3 cast? Here we go.

Sad as it is to see them go, this didn’t exactly come out of left field. In June of last year, The Daily Mail reported a source claimed Amit, Stephen, Lauren, and Lauren’s twin sister Ashley Wirkus had been cut from the reality show. (Ashley went from main cast member to recurring cast member after Season 1.) The Daily Mail’s source also claimed Season 2 newbie Danielle had been cut from the roster as well, but as the Season 3 trailer makes pretty clear, that did not happen. Season 3 welcomes series newcomers Hannah Berner, Paige DeSorbo, and Jordan Verroi.

And those series newcomers are going to hang out with some Sexy Unique West Hollywood Residents. Yes, we are about to get another Pump Rules and Summer House crossover event. This time around, Stassi, Katie Maloney, and Tom Schwartz head out to the Hamptons to hang out with their Bravo brethren. The trailer gives us a few glimpses of this crossover, one of which lets us know that, at some point, Stassi tells Amanda that Schwartz had to go to the hospital. In another, Carl makes a toast in which he seemingly points to Schwartz and Katie and says, "You guys are better than us... Nobody." Wow, who else cannot wait for some context?

The first season of Summer House began with a backdoor pilot on Pump Rules Season 5. This crossover was full of legendary moments, such as the scene where Scheana Marie refused to eat lobster because lobsters have claws like cats and she would never eat a cat. Oh, and the scene where Kyle told Stassi Schroeder she looked like Steve Jobs in her turtleneck swimsuit.

And we should never let go of the scene where Stassi demanded a seagull poop on her for good luck. (OK, that happened before the Pumpers met up with the Summer House cast, but it remains a crucial Montauk moment.) All in all, the crossover event was terrific television.