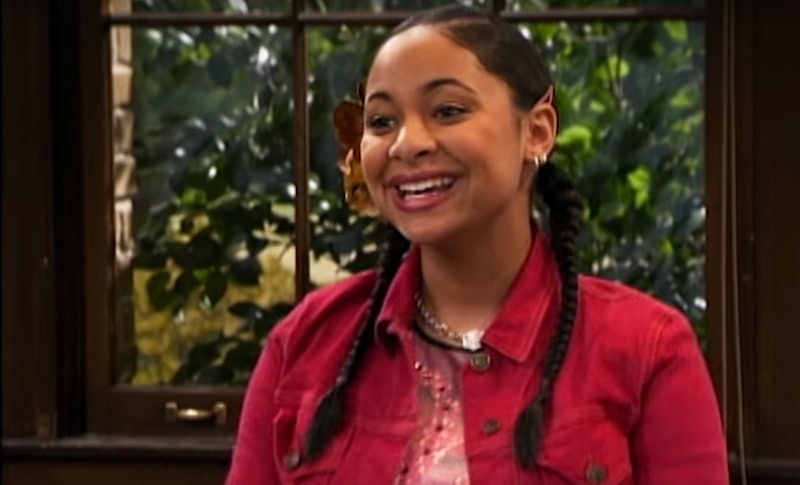 There's no need to try to conjure up psychic powers to predict when Raven's Home will premiere, guys. As TV Line reports, the That's So Raven spin-off will premiere July 21 at 10 p.m. ET, right after the premiere of Descendants 2. That's right, you will be hanging out with a grownup Raven and her family in less than three months time — the time to get excited is now.

Raven's Home is set to follow Raven's adventures as a single mom and fashion designer. Disney's official description for the show reveals she can still see the future, but so can her tween son Booker, whose visions are helping him adjust to a new school. Booker also has a twin sister, Nia. Of course, the best part of the premise is Raven and her longtime BFF Chelsea are raising their kids together as one, big modern family. Both women are divorced and tag-teaming single parent life in the same house. If the show is half as good as it sounds, fans both new and old are in for something special.

With the premiere set for mid-summer, you have plenty of time to embark on a rewatch of the original series, and Disney is making it easy to marathon the whole show. Starting June 1, all four seasons of That's So Raven will be on the Disney Channel app and On Demand.

In addition to sharing the release date, Disney also unveiled the official logo for Raven's Home, and the color scheme is going to give fans of the original series a serious case of nostalgia.

It almost feels like Raven never left, but much like Cory and Topanga in Girl Meets World, the character you grew up with is returning as a parent with a thriving career. Seeing Raven-Symoné and Anneliese van der Pol reprise their roles as Raven and Chelsea after a decade is bound to give old school fans all of the feelings, but Disney has cleverly laid the groundwork for yet another show with cross-generational appeal.

If you have kids, nieces, or nephews, you can share That's So Raven with them and then watch Raven's Home together. Imagine the cool points you will score for introducing the kids in your life to their next favorite show, and, as an added bonus, you get to spend the summer feeling like a kid again yourself.

More like this
The First Trailer For 'That '90s Show' Includes So Many Nods To The Original Series
By Jack Irvin, Alyssa Lapid and Grace Wehniainen
'Bel-Air' Season 2 Finally Has A Release Date & A New Trailer
By Brad Witter, Kadin Burnett and Sam Ramsden
How The Thanksgiving Episode Of 'Gossip Girl' Changed Pop Culture History
By Gabrielle Bondi
The 'Ugly Betty' Cast Just Reunited In The Best Way
By Sam Ramsden
Get Even More From Bustle — Sign Up For The Newsletter