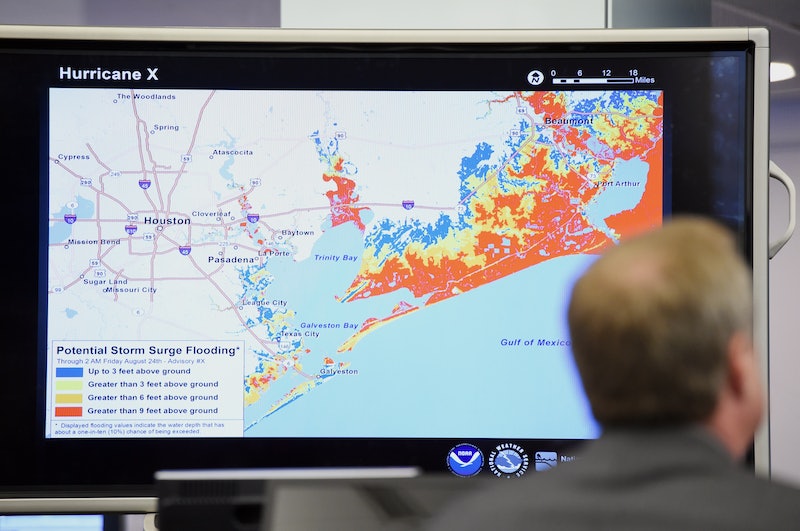 This hurricane season has had enough firepower to give just about anyone paying attention in the U.S., the Caribbean, and Central America a profound sense of hurricane weariness — unfortunately, though, it's not ready to stop just yet. Now, early predictions say that the trajectory of Tropical Storm Nate, the latest storm to develop on the Gulf of Mexico, could head up the Central American coast towards a landfall in the U.S. by Sunday morning.

The storm that could become Tropical Storm Nate is currently Tropical Depression 16, and it's maintaining 35 mph winds just off the east coast of Nicaragua. It isn't well-formed and thus it doesn't yet have the characteristic shape of a hurricane, but weather models say that it could become Tropical Storm Nate by the time it hits the Nicaraguan coast on Thursday morning. According to CNN's interactive storm storm tracker, there are tropical storm warnings currently in effect for parts of the Nicaraguan and Honduran coasts, and a hurricane watch in effect for the Mexican coast just south of and including Cancún.

If it does indeed brush by Nicaragua, Honduras, and Mexico, it's likely that the storm will hit the U.S. Gulf Coast by the weekend, either as a tropical storm or a low-level hurricane.

While it's still too far out to accurately predict where exactly Tropical Storm Nate might make landfall in the U.S., it seems likely that its path will take it somewhere between Louisiana and the Florida panhandle. It would almost certainly be stronger by that time, as it will have had several days to churn over the warm waters of the Gulf of Mexico, gathering power as it goes. This could be particularly bad news for the parts of the U.S. Gulf Coast, which hasn't exactly been spared by the earlier, stronger hurricanes that have already come through during this exceedingly damaging hurricane season.

Specifically, folks in the Florida panhandle and the coastal areas of Alabama, Mississippi, and Louisiana should begin preparing for potential heavy rain, strong winds, and even power outages. This won't come as welcome news to those in Louisiana who already suffered flooding after Hurricane Harvey, but this storm is still a while away, and there's always the potential that it could change course, not develop as expected, or even avoid those areas completely. In a best case scenario for the U.S. Gulf Coast, it would linger over land for longer in the Yucatan Peninsula, which wouldn't allow it to keep gaining power.

However, that wouldn't be the best news for the people in Mexico, Nicaragua, and Costa Rica, where the Weather Channel reports that rain totals could reach from 20 to 30 inches in some locations. That could become particularly dangerous in the more mountainous areas of Central America, where the heavy rain could lead to mudslides and flash flooding.

Moving back up towards the U.S. Gulf Coast, some predictions have narrowed the area of the storm's likely landfall to the Florida panhandle, and the Florida panhandle alone. According to AccuWeather Founder Dr. Joel N. Myers, the storm is likely to avoid the areas that Hurricanes Harvey and Irma most directly hit.

"The extent of the damage will depend, of course, on the precise path and whether the storm intensifies beyond a Category 1 storm," said Dr. Myers. "The most likely place for it to hit is the Florida Panhandle."

While it's important for people in that area to begin making preparations for a potential hit, it's also still too far out to be sure about how strong the storm will be. The tropical depression is still far from reaching hurricane status, and there's no guarantee that it will reach that point. In the best case scenario for both Central America and the U.S. Gulf Coast, the storm could simply fail to develop that far.