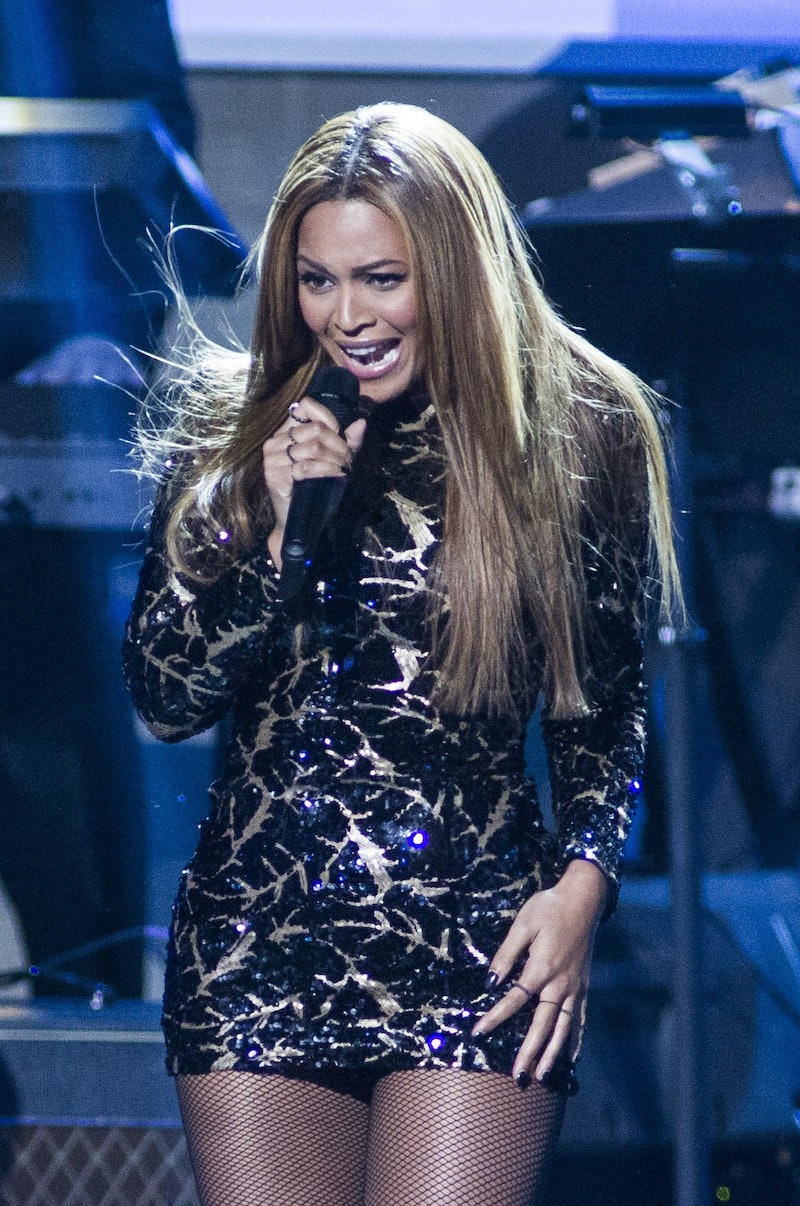 We all knew she wouldn't stay out of the spotlight forever, and now, Beyonce (sort of) has a new song (it's technically a remix, but fans will take it, OK?). This time, Bey isn't dropping an entire album out of the blue while exposing a possible bout of infidelity in her marriage. Nope. Instead, the Queen took to Instagram to release a remix of "Mi Gente" featuring an update: her own verses on the song. And if you're already losing it every time another minute passes without new music from our girl, the translation of Beyonce's "Mi Gente" lyrics isn't going to make it any easier.

The song is almost entirely in Spanish save for one of Bey's verses, and according to Bey's post, all her proceeds will go to relief efforts in Puerto Rico and Caribbean islands, which were recently ravaged by Hurricane Maria, as well as Mexico, which saw two of its deadliest and most devastating earthquakes since 1985 in the last few weeks. Beyonce's first verses are as follows, in Spanish:

With mine, everyone moves

I have the party in my genes

I am the queen of the children

My people do not stop, nobody here wants to go

If the rhythm is in your head

I love it when the bass sounds

We started to level up

The song dropped with an accompanying lyric video that takes a page out of every Disney sing-a-long video from the '90s — including a bouncing Beyoncè head to help you keep up with the lyrics.

Of course, any new whiff of music makes any Bey fan rear her head and beg the question: is it time for a new album, please? However, it seems that this is just her way of finding new methods to raise funds for Mexico and the Caribbean nations in need of relief.

After all, despite a mostly silent existence following the birth of her twins, Bey came out of relative hiding to do some good for Houston after Hurricane Harvey. Images of Beyonce meeting with victims went viral and along with the likes of Oprah, Stevie Wonder, and Reese Witherspoon (to name a few), Bey helped lead telethon efforts on Sept. 13 to raise money for her hometown, pulling in over $44 million dollars for relief, according to Deadline.

During the telethon, titled Hand In Hand: A Benefit For Hurricane Relief, Bey's prerecorded message spread hope and sought to inspire those more fortunate Americans to pitch in:

"During a time where it’s impossible to watch the news without seeing violence or racism in this country, just when you think it couldn’t possibly get worse, natural disasters take precious life, do massive damage and forever change lives. Natural disasters don’t discriminate. They don’t see if you’re an immigrant, black or white, Hispanic or Asian, Jewish or Muslim, wealthy or poor. It doesn’t matter if you’re from Third Ward or River Oaks, we’re all in this together. Seeing everyone of different racial, social and religious backgrounds put their own lives at risk to help each other survive, restored my faith in humanity."

Now, with her contribution to this remix of "Mi Gente," Bey is helping to deliver on that same message, reaching across borders and helping to offer that same relief to people suffering in other countries at the hands of natural disasters (on Instagram, she highlighted numerous organizations to send donations to as well as a list of countries and locations that need our help).

And while it may not solve everything those people are going through, it certainly helps light a fire under fans, who hopefully take these efforts as a cue to step up and donate what they can to the people of Puerto Rico & Mexico.