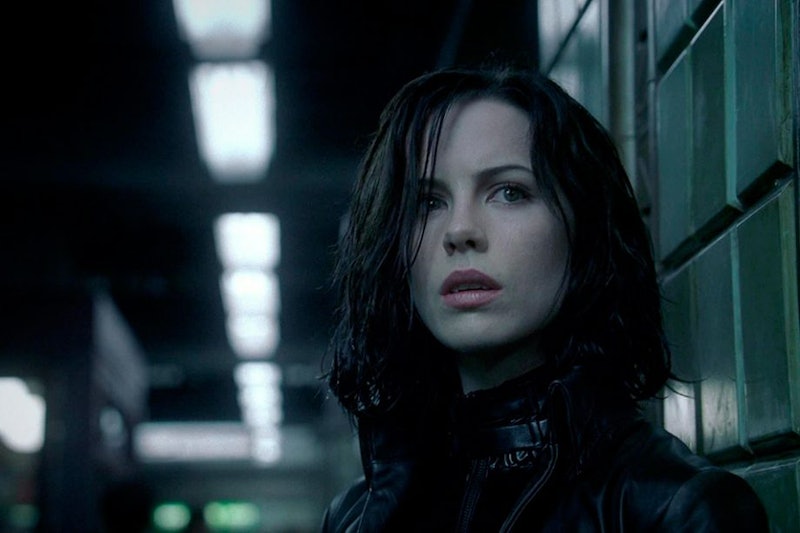 Horror movies can be a year-round pleasure, but there's something about the Halloween season that brings out our desire to scare ourselves with a fun movie. But thankfully, Halloween flicks don't all have to be terrifying. Some can be fun family adventures like Hocus Pocus or The Addams Family. And some can be violent, supernatural horror like Resident Evil or Underworld. The latter film isn't a movie particularly loved by critics, having earned a dismal 30 percent on Rotten Tomatoes, but with a 79 percent audience score, it's obvious there are folks out there who love it. And with the movie celebrating its 15th anniversary on Sept 19, it's a perfect time to revisit this campy gem, rentable on Amazon, iTunes, and Vudu.

The Underworld franchise tells the story of an ancient war between blood-sucking vampires and lycans, a type of werewolf. Though the 2003 movie spawned a series of sequels and prequels, some better than others, the original is a fun, cool romp of action fantasy seeped in that early 2000s sheen where everyone in a genre film had wet hair and wore shiny black leather. Kate Beckinsale stars as Selene, a vampire "Death Dealer," an assassin of lycans. When she discovers that her coven's lycan adversaries are hunting a human named Michael Corvin (Scott Speedman), a secret history of betrayal, forbidden love, and supernatural lineage gets exposed. Plus there are plenty of badass action sequences involving supernatural beings, shiny weapons, and tons of gloomy rain.

Mostly, Underworld is simply a sleek action fantasy with cool costumes, slick action sequences, and a touch of creepy horror. But it's worth highlighting this Halloween season for a couple of important reasons. The first is that its main story line revolves around a woman. While many of this era's action movies, like The Matrix, Blade, and the films in the Bourne franchise, feature male leads with female supporting characters, Selene is the focus in Underworld and in the majority of its follow-up films. Her strength, devotion, and protective instincts make for a more interesting dynamic than your average fantasy action film.

The early 2000s saw a number of female-led action films like Charlie's Angels and Tomb Raider, but Beckinsale's performance in Underworld as an icy, supernatural being adds a special touch to the mix. Selene's power feels inspired by characters like Sarah Connor in the Terminator franchise, Milla Jovovich's in the Resident Evil series, and any of Michelle Yeoh's Hong Kong action films. And in turn, it has inspired characters like Charlize Theron's Furiosa of Mad Max: Fury Road, Scarlett Johansson's Lucy of Lucy, and Theron's Lorraine of Atomic Blonde.

Selene's dominance and capabilities are highlighted throughout Underworld as she cares for the blundering male lead, Michael. Though he's the descendant of both the vampire and werewolf lines of the Corvinus family, Michael isn't exactly capable when it comes to embracing, or fighting, both sides of his lineage. He's in constant need of rescue, and Selene's heroism in keeping him safe is a fun role reversal of the usual hero and damsel dynamic. In fact, in pretty much every sequential Underworld movie (except for Rise of the Lycans, in which Selene doesn't appear) she's accompanied by a kind of helpless, boring male counterpart. Having a female lead in a fantasy action franchise is already pretty great, but that she's never overshadowed by one of her male companions proves she's the true hero of the franchise.

Additionally, Underworld also changes up the vampire/werewolf genre by adding a bit of modern technology to it all. Sure, the weapons they use are high-tech and sleek, but the entire film is bathed in possibilities provided by science. Instead of using a mythology that relies on magic and mystery, Underworld uses pathology to explain the existence of vampires and werewolves. Hundreds of years prior to the events of the movie, a man named Alexander Corvinus was the only survivor of a plague because his body managed to mutate the virus to his benefit. His three sons inherited his immortality, but one was bitten by a bat and the second by a wolf. The third, Michael's ancestor, was sort of ground zero for the original strain. Sure, it's a little convoluted, but the scientific stretches in Underworld make things a little more interesting than your average deal with the Devil vampire flick.

But probably the best thing about the movie is its unapologetic camp. Underworld never pretends that it's something that it's not. You want vampires and werewolves shooting high-tech weapons at each other? You got it. You want beautiful people looking beautiful in some seriously gothic period costumes and capes and stomping around mansions? You got it. You want classically trained actors like Billy Nighy reciting kind of ridiculous dialogue about vampire bloodlines and lineage with total seriousness? You most definitely got it.

Like the velour capes in which its characters wrap themselves, Underworld luxuriates in its atmosphere and invites you in, making it a perfect Halloween movie to revisit. The film might be 15 years old, but like its characters, it's truly immortal.

More like this
You Can Finally Stream 'Ticket To Paradise' At Home
By Chloe Foussianes
'The Holiday' Director Just Addressed *Those* Sequel Rumours
By Sam Ramsden
These ‘Love Actually’ Plotlines Are “Out Of Date,” According To Director Richard Curtis
By Grace Wehniainen
This Iconic ‘Love Actually’ Scene Drove Alan Rickman “Insane”
By Grace Wehniainen
Get Even More From Bustle — Sign Up For The Newsletter