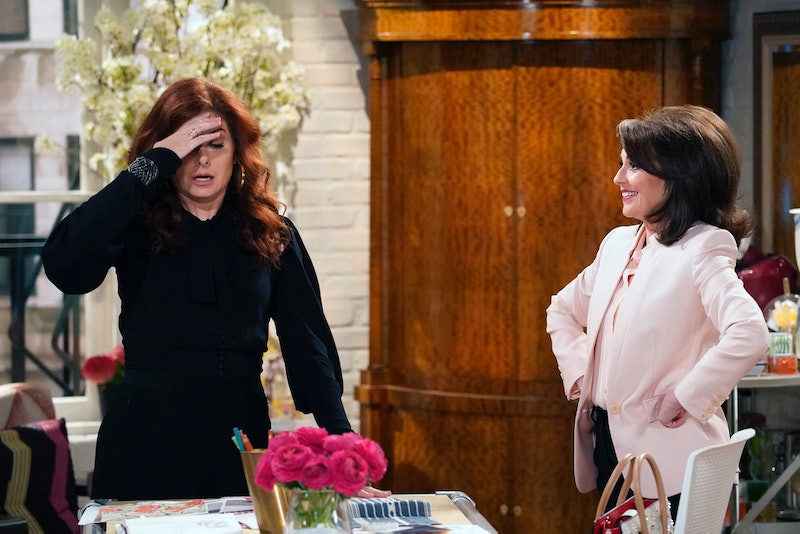 When Will & Grace made its debut in 1998, the world was a vastly different place than it is in 2017, when the Will & Grace revival is premiering. There was no high-speed Internet, no social media, and no iPhones. 9/11 hadn’t happened yet, and the "War on Terror" was not even a thought. Don’t Ask, Don’t Tell was still in effect, and gay marriage was not yet legal on a federal level (nor in most states). Will & Grace was groundbreaking at the time for its portrayal of gay characters and its insistence on treating them like, you know, regular people. There were few other gay main characters on television at the time, and since it aired, leaps and bounds have been made in terms of equality. Now, Will & Grace is back in a time where there are plenty of LGBTQI characters represented in the media, so this time, Will & Grace is fighting a new battle — one with the White House. Will & Grace feels just the way it always did, except this time around, the political is personal. Spoilers for the premiere follow.

The premiere revival episode starts the way many Will & Grace episodes have before — with Will and Grace in their apartment. Grace is fresh off a divorce, and things are just like they were again. The pair have always been best friends, and since they lean on each other in times of trouble, Grace is back in the nest. (Oh, and they explain away the finale episodes as Karen’s alcohol-fueled dreams.)

While in 1998, the show would have made some crack about the topical television show at the time, in 2017, Will is writing a congressman. (He wants to sleep with him, but still!) Grace wants to start getting politically involved. Less than a quarter of the way through the episode, and the politics are there. There’s no tiptoeing around it.

They also speak to the fact that the country is so divided — Grace talks about how Karen, a lifelong conservative and friend of the Trumps, won’t stop bragging that “her guy” won the election. She brings it up everywhere, so much so that Grace tells Karen they can’t talk politics at all, especially in the office. That’s well and good, but then Karen tells her that Grace Adler Designs, Grace’s interior decorating firm, has a potential new client — the White House. "Melanio" called and said the President doesn’t like his “dumpy office”. Grace is torn between making money and standing up for her convictions, and it makes sense — at no time in recent memory has it seemed more vital to shout and yell about injustice and dissatisfaction with the current Washington, D.C., regime. Grace wants to drain the swamp, but she wants to put her firm on the map, too. She ultimately opts to take the job, for the good of the comedy of the show, but Grace’s internal struggle is real. How much can a person allow before he or she takes action against an oppressor?

In 1998, CNN reported that Bill Clinton was just wrapping up depositions on his sexual misconduct case with Paula Jones, and reports of his affair with Monica Lewinsky affair were starting to leak out. In 1998, Osama bin Laden had just published a fatwa against the Western world, also per CNN. In 1998, Saddam Hussein declared that he'd comply with the UN’s wishes to look for nuclear weapons in the country, but then rebuffed them a few months later. (According to the Council on Foreign Relations, the U.S. and Britain would launch airstrikes in December.) In 1998, Serbians and ethnic Albanians were beginning to clash in Kosovo, the Serbs accused of ethnic cleansing, according to BBC News. If you notice, most of these major news items, save for the Clinton scandal, which was not life or death by any means, were taking place overseas.

In 2017, North Korea is threatening nuclear strikes and challenging Donald Trump. In 2017, white supremacists are emboldened by hateful rhetoric that our president has not denounced. In 2017, a Republican-controlled Congress is trying to roll back certain social programs.

In 1998, wars were being fought overseas, and they probably weren't in the forefront of America's consciousness. We were all, frankly, more worried about our President's sex life. In 2017, though, the wars feel much closer to home. That’s the underlying current of Will & Grace — the show fought for the rights of others before. And the premiere indicates that they're going to do it again, by any means necessary.